Kenosha woman goes off script at Biden event: 'I was told to go off of this paper but I can't' 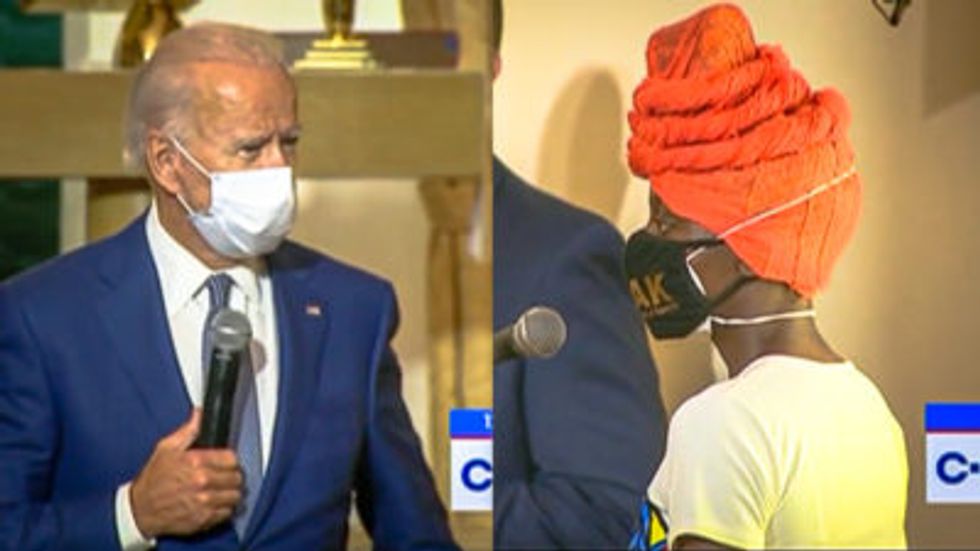 Activist Porsche Bennett went off script at an event in Kenosha, Wisconsin on Thursday because she said she wanted to give Democratic presidential nominee Joe Biden her truth about the legacy of racial discrimination.

Bennett spoke at a church in Kenosha where Biden was holding a listening session in the aftermath of the police shooting of Jacob Blake.

"I'm just going to be honest, Mr. Biden," Bennett began. "I was told to go off this paper but I can't. You need the truth and I'm part of the truth."

"The changes that we want have to be more in effect," she said. "We have yet to see action. And I was always raised to go off action and not words."

According to Bennett, the community is demanding to "hold these officers accountable to the same crimes that we are held accountable to."

"If I was that officer, I would be under Kenosha County Jail right now," she asserted. "If a medical examiner does their job and says, I'm ruling it homicide, that's murder. Why are they not being done the same exact way that me or my brother and sisters out here in this world are being treated?"

"I'm only 31 and I've seen enough," Bennett remarked. "It's not what a lot of people think it is for us. We want the same exact rights as others. We want to be treated just like everyone else."

She added: "Gentrification has to stop as well. We can't get that if someone with that voice can't put that into effect. That's all we're asking. We want the same treatment. We're not asking, oh, put us above anybody. We're not saying we matter more than anybody. But for so many decades, we've been shown we don't matter. And right now, we just want someone who's actually going to show and put that action in."