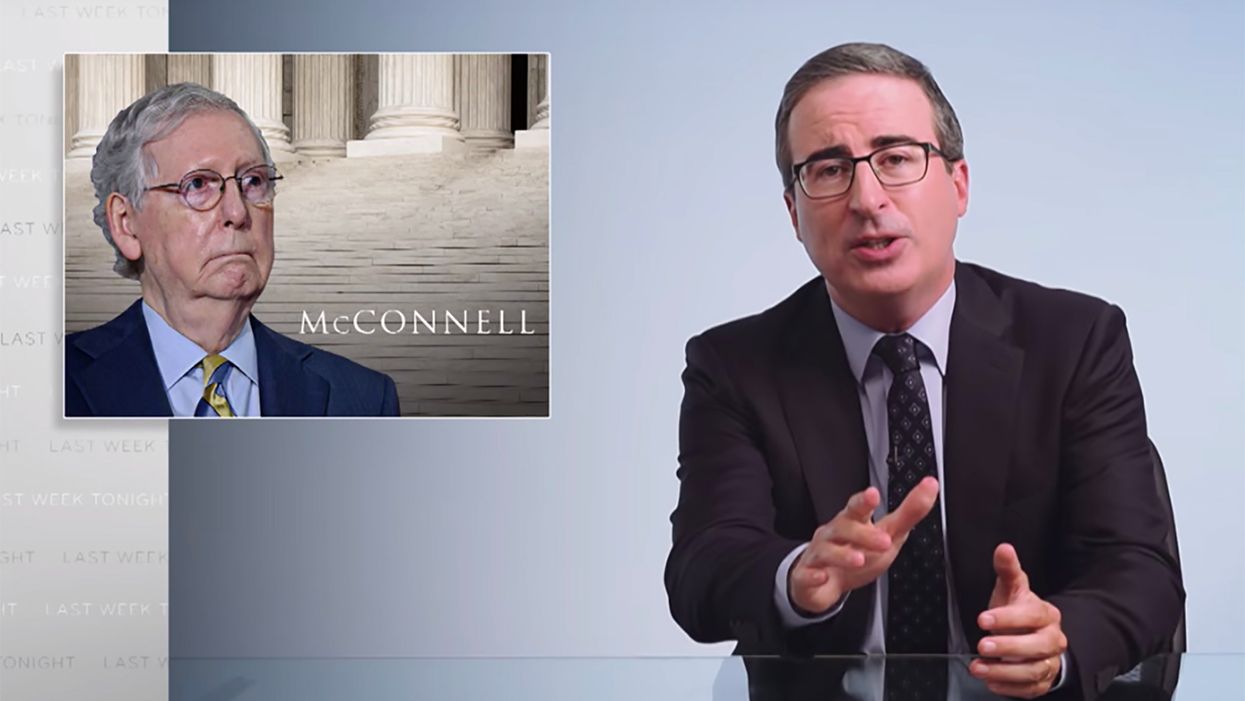 "Last Week Tonight" host John Oliver returned to his Sunday show, fresh off of an Emmy win, to explain how the United States got so incredibly f*cked up.

Oliver began by remembering Justice Ruth Bader Ginsburg and noting that her seat will be taken over by a far-right conservative justice who will unmake healthcare, reproductive freedom, LGBTQ rights and more things Americans have indicated they want.

He played a clip of Sen. Mitt Romney (R-UT) claiming that America is a "center-right" country, which Oliver called outright "bullsh*t." Not only do Americans overwhelming support reproductive freedom, they also support LGBTQ equality. At the same time, Americans also believe, overwhelmingly, that President Donald Trump shouldn't be allowed to appoint the next justice.

After walking through the corrupt ways America got to this point, namely Sen. Mitch McConnell (R-KY), he suggested major ideas required for bringing down this disparity in the United States that gives the most amount of power to small, less populous states.

However, "as easy and as fun as it is to blame Mitch McConnell and his mule piss for everything, it is a mistake to focus just on the people involved here because there is a whole system underneath them that has enabled them to do what they have done," said Oliver.

After blaming Mitch McConnell as one of the ways we got to where we are, Oliver then blamed the undemocratic systems that still exist in the United States. Namely, Oliver called out Republicans for claiming that because they hold the Senate majority, it means they have a "mandate" to do whatever they want. The problem with that logic is that neither the Senate nor the presidency reflects the so-called "will of the people."

"First, take the White House," said Oliver. "A Democrat has won the national popular vote in four out of the last five elections. But we've spent 12 of the last 20 years with a Republican in office. And that is because the Electoral College, with its winner-take-all approach of the states, can distort the will of the majority. On top of which, it gives disproportionate power to less populous states, which tend to be rural and more conservative. Something that is even more pronounced in the Senate."

So, when Amy Coney Barrett is confirmed, "a president who lost the popular vote will have picked the quarter of the federal judiciary and one-third of the supreme Supreme Court. And his choice will be rubber-stamped by a Senate-Republican majority that represents 15 million fewer people than the Democratic minority."

Oliver walked through what Democrats can and should do if they take power in 2020. It's time for fast and sweeping change, and they can't wait around for "bipartisan" buy-in because they'll never get it. If we truly want America to be a representative democracy, we have to give representation to every American and ensure they're treated equally. That doesn't exist now, but if Democrats win, it could.

And now, here's a poem Oliver wrote about Ted Cruz: