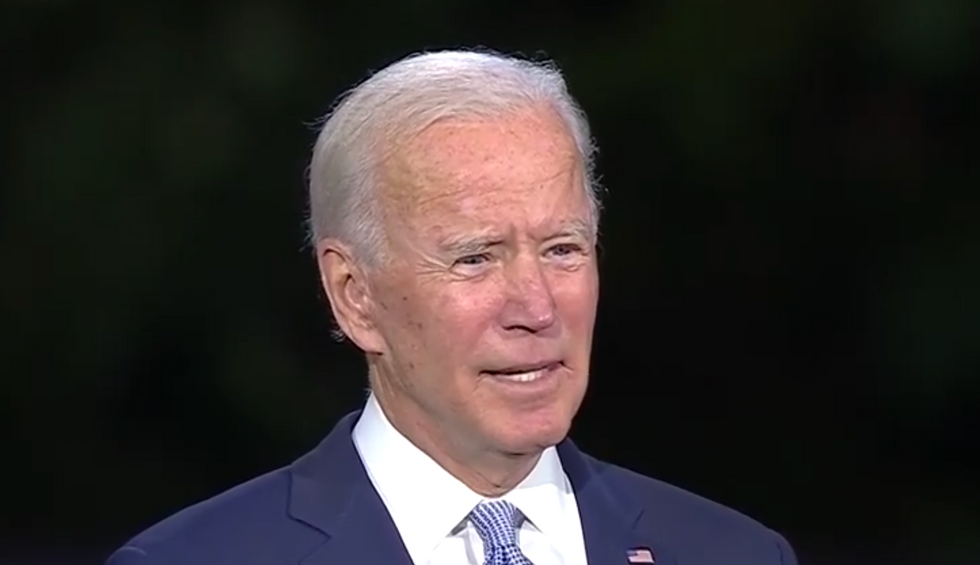 Joe Biden’s performance in Thursday night’s CNN town hall was another big reminder what a big mistake the Trump campaign’s strategy of portraying Biden as too old and senile to function has been. Because every time Biden gets up and is not just functional but pretty darn sharp, he benefits from the low, low expectations that have been set up for him.

That’s just what he did Thursday night at a pandemic-era drive-in town hall, to the point that Republicans decided Biden must have cheated somehow. “Looks to me that Biden had an idea of what the questions would be, at least areas of questioning,” Bill O'Reilly tweeted. Like nobody could have predicted that Biden would get questions on COVID-19, health care, economic struggles during the pandemic, policing and racial justice, and, at a town hall held in fracking country, fracking—seriously, what a mystery!

Biden made a few minor misstatements of the kind that anyone talking extemporaneously for a long time is likely to make, but the fact-checkers had a light night to recover from Donald Trump’s lie-fest on Tuesday. And, of course, the substance was a world apart. Biden comes in with policies beyond “build a wall” and “lock up my political opponents” and “undo everything President Obama did,” and it showed. Biden cares about people other than himself, and it showed.

The night semi-predictably opened with a question from someone who’d lost a family member to COVID-19, a woman whose sister contracted it at her hospital job, who asked how Biden would protect people on the job. Biden’s answer, on substance, included national standards, federal funding, masks, rapid testing, contact tracing, and personal protective equipment. But he opened with compassion. “First of all, I feel so badly for you. You know, we talk about 200—almost 200,000 deaths and it's almost like background noise. But it means a lot of empty chairs, it means a lot of children without their mothers or fathers. It means a lot of people not able to see their parents so much,” Biden said. “So my heart goes out to you and your sister as well—her children. It is just incredible.”

On vaccines, Biden said “first of all, I don't trust the president on vaccines. I trust Dr. Fauci. If Fauci says the vaccine is safe, I take the vaccine. Now, we should listen to the scientists, not to the president, number one.” But he also showed some very specific knowledge, highlighting the lack of vaccine testing on children.

Biden worked—as he has throughout his career—to frame himself as the candidate of the working- and middle-class, the blue-collar boy from Scranton. After Trump focused on the stock market in Tuesday’s town hall, saying “Stocks are owned by everybody,” Biden took exception.

”I really do view this campaign as a campaign between Scranton and Park Avenue, and I really mean it,” Biden said. He continued, “All that Trump could see from Park Avenue is Wall Street. All he thinks about is the stock market and telling him, we're going to do all right. Everybody who owns stock. How many of you all own stock—now, in my neighborhood in Scranton, not a whole lot of people own stock.”

“We are as good as anybody else. And guys like Trump, who inherited everything and squandered what they inherited are the people that I've always had a problem with, not the people who are busting their neck.”

As an answer to a question about white privilege, it left something to be desired (though Biden at least opened with “I've benefited just because I don't have to go through what my black brothers and sisters have had to go through, number one”), but it made clear a theme that Biden wants to hammer, contrasting his own self-made success with Trump as the child of privilege who took what he was given and failed repeatedly.

On criminal justice reform, Biden returned to his Park Avenue theme, this time contrasting the Park Avenue privileged not with the white working-class but with Black people, saying of reform efforts during the Obama-Biden administration that “We moved to eliminate the disparity between crack cocaine and powder cocaine. So, a black guy getting a nickel bag, and snorting coke, when mandatory to jail, someone who has did a line and in, you know, in Park Avenue, got arrested, they got probation. And so, we've tried to change their mistakes made.”

Biden also touched on the minimum wage, green jobs and the move to clean energy, Buy American provisions, Russia and China, and more. Overall, it was a performance that has to have Team Trump rethinking that whole “make people believe Biden can’t hack it” strategy, and worrying about the debates to come.