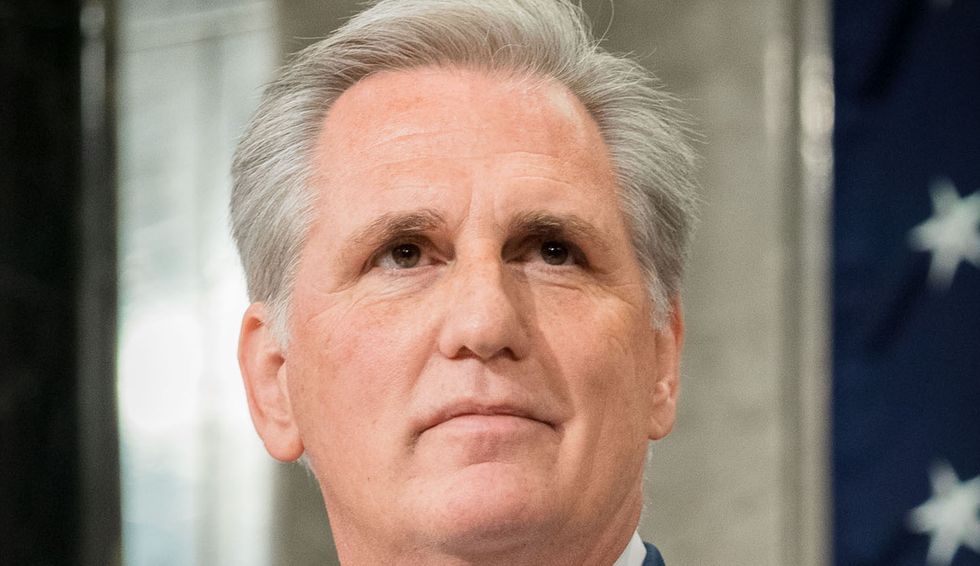 You can't make this stuff up: After the Republican National Committee entirely skipped over passing a party platform this year at its convention, House Republicans have followed up with a flimsy one-page agenda most middle schoolers would be ashamed to pass off as a completed assignment.

The proposal, billed as “The Republican Commitment to America,” reaffirms the party's commitment to hoping against hope the coronavirus will disappear like a miracle and Republicans can reclaim the supposed glory of prepandemic times.

“Republicans helped build the greatest economy in a generation and the American way of life was thriving,” House Minority Leader Kevin McCarthy of California said Tuesday. “We will do it again. That is our promise to you.”

The document was nothing more than a series of slogans—Restore Our Way of Life, Rebuild the Greatest Economy in History, Renew the American Dream—undergirded by a series of substance-less one-liners such as promising to defeat the virus by "Tripling rapid COVID testing and developing a vaccine that is safe, effective, and available this year." Apparently, after six months of empty promises on testing, Republicans are finally going to turn things around—if only they can seize the House majority!

In fact, each substance-less aspiration had a check mark by it as if it were practically complete—just take their word for it.

Perhaps House Republicans, deeply aware that they have zero chance of retaking the majority following Donald Trump's criminal handling of the pandemic, just couldn't be bothered to put a serious proposal forward. But more than likely, they simply didn't have anything worthwhile to say. After decades of squeezing Ronald Reagan's “Morning in America” entirely dry, the GOP’s flower has finally wilted into a stub—a mere suggestion life may have once existed there. One day, maybe they’ll emit a poisonous odor, like on Venus, alerting scientists to signs of life.

But after the GOP exploded the deficit and national debt through cutting taxes for the rich—long before the urgency of pandemic spending—House Republicans decided to drop all mentions of fiscal responsibility from their supposed agenda. And after failing miserably at repealing (not to mention replacing) the Affordable Care Act (ACA) when they had unified governmental control, Republicans finally dropped that Lucy-with-the football schtick from their wish list. Who knows—maybe it occurred to them that rallying around the destruction of Americans' health care in the midst of a pandemic might not be the brightest move. Whatever the case, they appear to have left destruction of the ACA to the courts, content to just cheer from the sidelines.

House Republicans similarly skipped over any mention of their desire to cut social safety net programs like Social Security and Medicare. That likely wasn't going to be a hot seller either amid Trump's pandemic recession.

If anything, the Republican "commitment" is now down to proclaiming their fealty to Trump, cutting taxes in perpetuity (debt be damned), and making completely unsupported promises about supporting education, workforce development, infrastructure (more infrastructure weeks!), and the health and welfare of American citizens. On the first two, mission accomplished. As for any of the others, House Republicans haven't introduced or passed a workable proposal for any of them in years, if not a decade-plus. In reality, they're too busy fighting with each other to do anything else but take occasional breaks to bow to Donald Trump.

“Every day you see the damage of years of Democrat policies,” Rep. Liz Cheney of Wyoming said Tuesday at the unveiling—as if Donald Trump wasn't sitting in the White House and Republicans had any policies of their own.