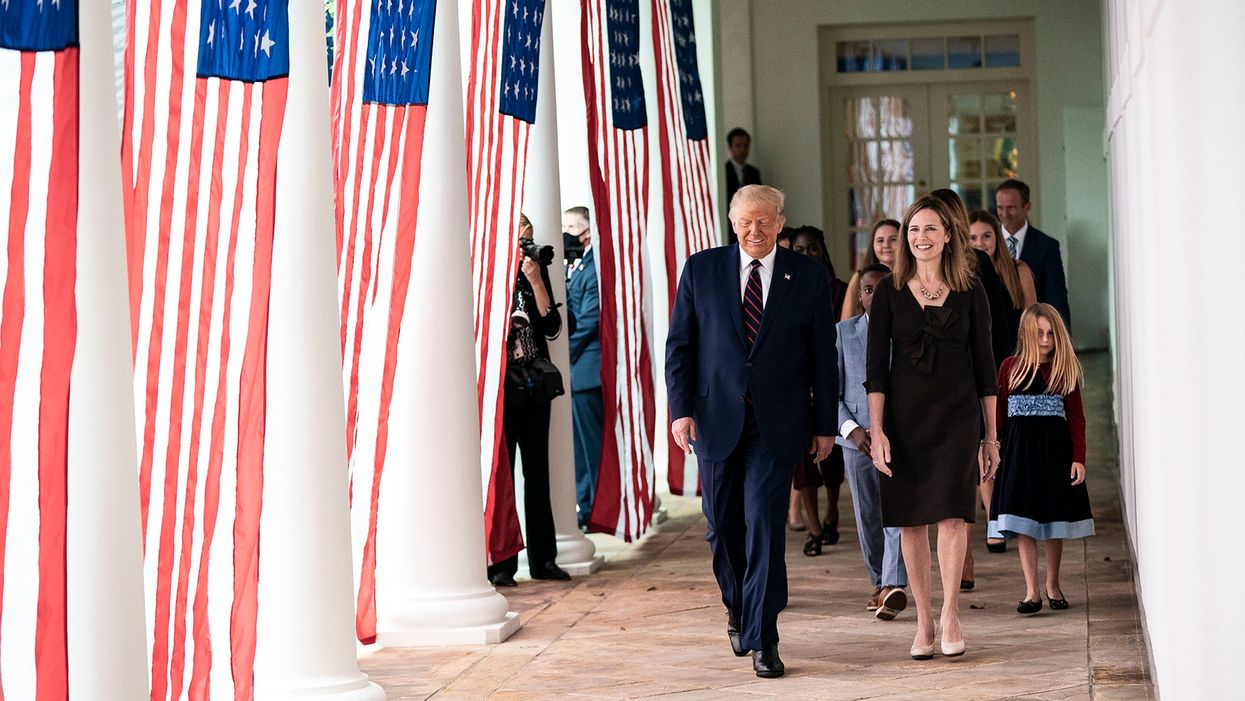 Senate Republicans are likely to have a lot of meetings to rush to Wednesday morning, when reporters try to grab them for comment on Tuesday night's debate and the performance of the guy at the top of their ticket. The guy who will do anything to win again. Including naming a Supreme Court nominee who would hand the presidency over to him, whether or not his claim before the court is legitimate. He sure has found his candidate in Amy Coney Barrett. The nominee completed her Senate Judiciary Committee questionnaire, and refused to commit to recusing herself from any 2020 election cases. In that, she proved herself unqualified for the job.

The reality is, any federal court nominee—at any level—worthy of the seat would decline the invitation from Trump right now, for any number of reasons. The number one, though, is Trump standing on a debate stage and reiterating that he has no intention of allowing for a peaceful transition of government should he lose in November. Trump has made it blindingly clear that he'll do anything to "win," and Barrett is key. He repeated it Tuesday night. Wallace asked specifically, "are you counting on the Supreme Court, including a Justice Barrett, to settle any dispute?" Trump answered "Yeah. I think I'm counting on them to look at the ballots, definitely. […] But for the ballots, I think so."

Barrett is the second of Trump's nominees to have legal experience stealing the White House. Both she and Brett Kavanaugh were on George W. Bush's legal team in Florida. When Trump says he's "counting on them to look at the ballots" think "hanging chads" in Broward County in 2000. That's bad enough. What followed was even worse, because when Wallace asked "Will you urge your supporters to stay calm during this extended period, not to engage in any civil unrest? […] And will you pledge tonight that you will not declare victory until the election has been independently certified?" Trump refused. "I'm urging my supporters to go in to the polls and watch very carefully," he said. "Because that's what has to happen. I am urging them to do it."

That drew fire from Democrats before the debate. "The underlying fault here is with the timing, which makes it a sham, but certainly she should recuse herself. In a normal world, there would be no question about it," Sen. Richard Blumenthal, a Democratic member of the Judiciary Committee, told reporters. Now? Now that Trump has put the violent white supremacist Proud Boys on "stand by" for "poll watching" this election? Now that he's said, expressly, he is "counting on" the Supreme Court to decide the election for him?

The questionnaire also reveals that White House chief of staff Mark Meadows and White House Counsel Pat Cipollone contacted Barrett the day after Ruth Bader Ginsburg died. The day after. Three days later, she met with Trump and Vice President Mike Pence and Trump offered it that day. She accepted it that day. Three days after RBG died. There was really no one else on the list for Trump. He needed the person who is unprincipled enough to be willing to be installed on the court for the primary purpose of establishing his autocracy. It doesn't hurt that she's a far-right evangelicals' wet dream.

At the very least Barrett would to recuse herself from election cases, if she were actually worthy of the job. What the moment really demands is that she entirely withdraw from consideration until after the election, at the earliest. It's a testament to how much of partisan, extremist ideologue she is that she agreed to this in the first place—the day after Ruth Bader Ginsburg died.