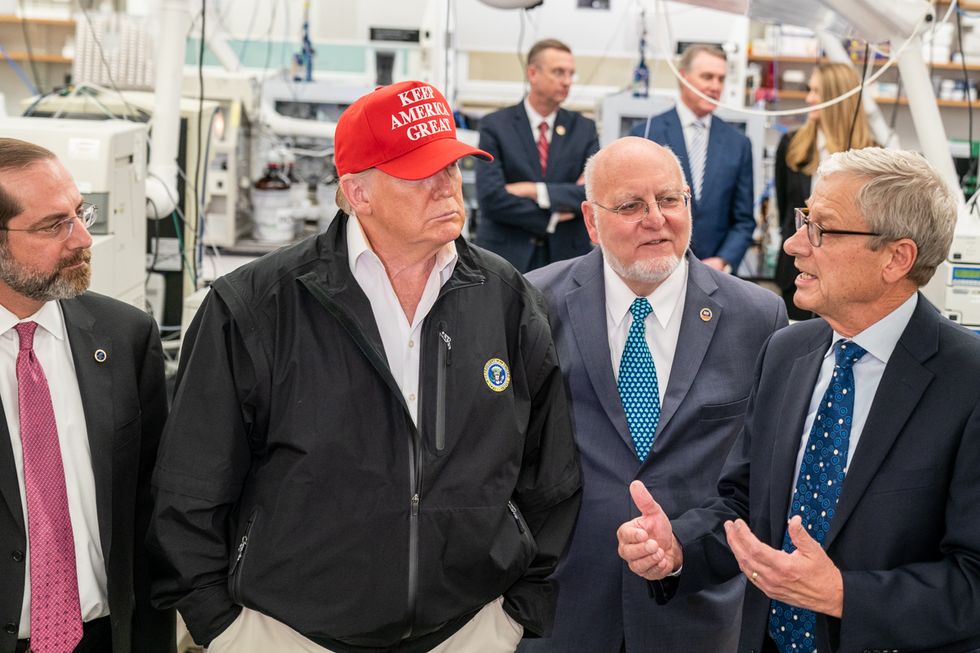 President Donald J. Trump, joined by the Secretary of Health and Human Services Alex Azar, left, and Dr. Robert R. Redfield, director of Centers for Disease Control and Prevention, listens as Dr. Stephan Monroe, associate director of the CDC describes the tour given to President Trump during his visit to the Centers for Disease Control and Prevention Friday, March 6, 2020, in Atlanta. (Official White House Photo by Shealah Craighead)
Alex Henderson
September 17, 2020

As angrily as President Donald Trump rails against the mainstream media — and as much as he complains about “fake news” — he also has a history of trying to manipulate the media to his advantage. But liberal columnist Greg Sargent, in his Post column, argues that Trump is losing his ability to manipulate the news cycle and cites this week’s COVID-19 vaccine controversy as an example.

“President Trump is sometimes said to possess an almost mystical level of control over the news cycle and the public narrative — an otherworldly dominance that is usually depicted with well-worn phrases like ‘Trump is flooding the media zone’ or ‘Trump thrives on chaos’ or ‘Trump’s distractions are working for him,’” Sargent explains. “But if Trump ever did possess such paranormal powers, the real story of the moment is that he’s losing control of them — and they are now operating against him.”

Sargent describes “the rollout of a coronavirus vaccine” as an example of “this emerging dynamic,” noting that a vaccine is “becoming a major issue in the presidential race, but not on the terms Trump originally intended.”

“Trump has now explicitly broken with the head of his Centers for Disease Control and Prevention, Dr. Robert Redfield, on when a vaccine will be widely available,” Sargent notes. “Redfield had said that even if the vaccine is announced in November or December, it won’t be ‘fully available’ until mid- or late 2021. But then, Trump smacked Redfield down, insisting that once a vaccine is announced, it will go to the general public ‘immediately’ — and that ‘under no circumstance will it be as late as the doctor said.’”

Sargent adds, “In saying this, Trump may have thought he was marshaling his reality-bending powers to great effect once again. But it’s actually having the effect of inadvertently upending his own propaganda.”

The Post columnist explains how, noting, “By publicly breaking with Redfield over the timing of the vaccine, Trump defined the debate as one in which the public must choose: either believe Trump, or believe the scientists…. Trump has clarified the choice: (former Vice President Joe) Biden is on the side of science, against Trump.”

Sargent wraps up his column by arguing that when it comes to a COVID-19 vaccine, Trump has undermined his own credibility by fighting with one of “his own scientists.”

“The obvious game plan here is to create the impression that a solution is right around the corner, due to Trump’s stupendous leadership — even if it ends up not materializing — and rely on credulous media to amplify the message in the run-up to the election,” Sargent writes. “But why would the public believe anything the White House says about this, let alone trust Trump to manage the fiendishly complex rollout process that will follow, after seeing him explicitly declare that he should be believed over his own scientists — and after we’ve seen so much other naked subversion of the public interest to Trump’s political needs?”