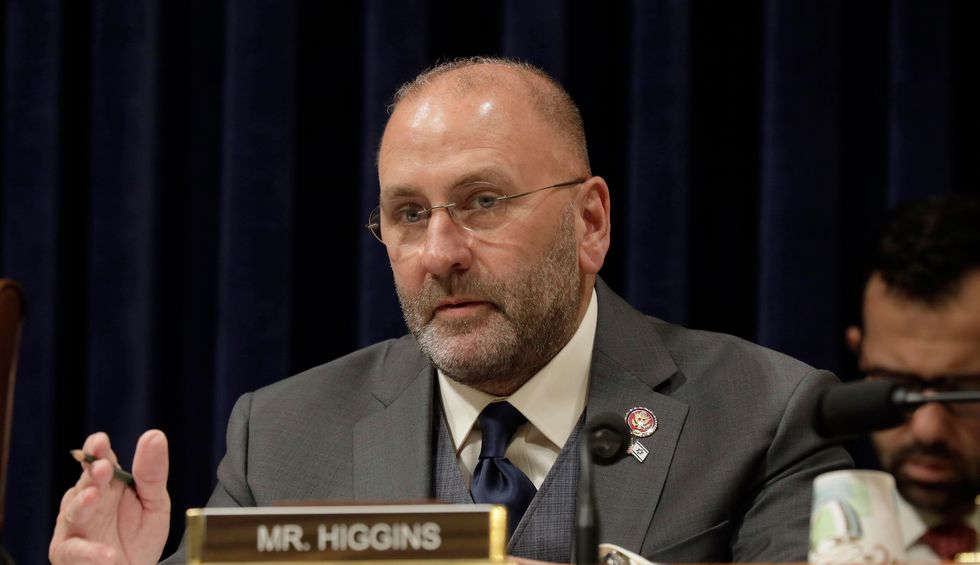 Republican Rep. Clay Higgins of Louisiana has a long and colorful track record of being a right-wing prick who has a strange preoccupation with World War II, though which side he’s most obsessed with remains debatable. But one thing is clear: He likes to dress with flair and really sell his Military Police Corps career, complete with tough talk about hitting heavy bags and “riding Harleys to honor our American flag.” It’s almost like he’s overcompensating for something. (Just saying.) Anyhoo, Higgins is also a big Second Amendment rights and states’ rights guy. Of course, that doesn’t apply to those who aren’t white right-wing, Second Amendment types.

According to The Advocate and Mother Jones, on Tuesday Rep. Higgins posted a picture of armed Black demonstrators on Facebook, captioning it: “I’d drop any 10 of you where you stand.” Higgins seems to be working on the assumption that these demonstrators are out-of-towners with secret agendas—the oldest and most classic fascistic ruse in abusive states dealing with civil unrest. Higgins made sure everyone knew that he wasn’t being racist while he was clearly being racist, since trying to find similar images of white guys in tactical gear and assault weapons “demonstrating” would also include too many MAGA hats. "Nothing personal. We just eliminate the threat. We don't care what color you are. We don't care if you're left or right. if you show up like this, if We recognize threat...you won't walk away," he spewed.

The post disappeared very quickly from his Facebook campaign account. The Advocate reports that Facebook said it removed Higgins’ post as it breaks their “Violence and Incitement” policies. To be clear: Higgins is a big Second Amendment guy. The fact that he chose to use an image of Black American demonstrators with their Second Amendment gear on to stipulate some kind of rebellion or invasion is genuinely racist. Louisiana is made up of almost 40% Black citizens, making it one of the Blackest states in the Union. Louisiana has super lax gun laws, allowing people older than 17 years old to freely open-carry firearms without a permit.

The idea that Rep. Higgins would single out a group of Black demonstrators in Louisiana who are open carrying, as an example of outsiders and interlopers to be potentially targeted for vigilante justice, is not simply abhorrent—it’s straight-up racist and murderous.

So then Higgins posted an image of a bald eagle, and this threat against … the U.S. government, maybe?

America is being manipulated into a new era of government control. Your liberty is threatened from within.

Welcome to the front lines, Ladies and Gentlemen.

I suggest you get your mind right.

I’ll advise when it’s time gear up, mount up, and roll out.

You don’t have to be in the army to know what Higgins is attempting to do here. He and his people didn’t respond to reporters’ questions because Higgins, deep down inside, is a hypocrite and a coward. It’s the reason behind all of his performative machismo bullshit.