Trump’s presidency is a death cult 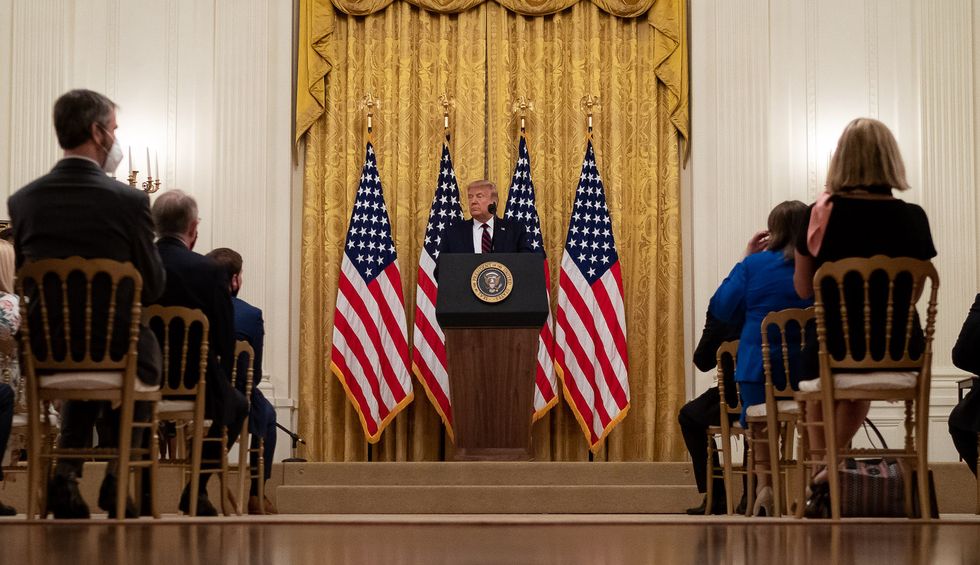 When President Donald Trump was challenged by Axios national political correspondent Jonathan Swan to respond to the fact that, “a thousand Americans are dying a day” due to COVID-19, the president responded as though the grim tally was perfectly acceptable, saying, “They are dying, that’s true. And it is what it is.” While observers were aghast at the callousness of his statement, it should not have surprised us. Trump had warned that the death toll would be high, and he had asked us months ago to get used to the idea. In late March, the White House Coronavirus Task Force had projected that 100,000 to 240,000 Americans would die from the virus. Rather than unveil an aggressive plan to tackle the spread and prevent the projected mortality figures, the president had said, “I want every American to be prepared for the hard days that lie ahead.”

The New York Times saw this warning as a contradiction to Trump’s stance in February and early March when he had said that “we have it totally under control” and “it’s going to be just fine.” The paper seemed to heave a sigh of relief that a few weeks later, “the president appeared to understand the severity of the potentially grave threat to the country.” But the report’s authors failed to grasp that Trump is willing to accept anything—including mass deaths—in service of his political career.

In fact, mass death appears to be part of Trump’s reelection strategy as per a July 30 Vanity Fair report on the administration’s strategy to contain the pandemic. The investigative piece explained that Trump’s adviser and son-in-law Jared Kushner was part of a group of White House staffers that corresponded frequently to discuss the rapidly spreading virus. According to a public health expert who was described as being “in frequent contact with the White House’s official coronavirus task force,” one of the members of Kushner’s team had concluded that, “because the virus had hit blue states hardest, a national plan was unnecessary and would not make sense politically.” The unnamed expert told Vanity Fair, “The political folks believed that because it was going to be relegated to Democratic states, that they could blame those governors, and that would be an effective political strategy.”

If it is true that Kushner embraced the idea of COVID-19 deaths as part of a political strategy for Trump’s reelection, there can be no clearer evidence that the Trump presidency fits the definition of a “death cult.”

But Trump’s team is also deeply inept, and its macabre tactics appear to have backfired. If Kushner expected a highly contagious virus to follow his political rules and relegate itself to Democratic-run states, he was proven very wrong, very quickly with Republican-run states like Florida, Texas, Alabama, Georgia, and Arizona being among the hardest hit.

For years, the Republican Party has cast itself as a self-righteous force for morality, embraced the “pro-life” movement, and claimed to align with “Christian values.” But just as Trump—arguably the most criminal of all U.S. presidents—has adopted a mantle of “law and order” with no hint of irony, the GOP as a whole has also shown time and again that its embrace of morality and law is a purely political tool. Now, as the nation grapples with mass deaths from a disease that a Republican president spectacularly and willfully failed to contain, conservative politicians appear willing to simply accept it. Their silence is deafening compared to the angry denunciations many Republican lawmakers hurled at President Barack Obama over his response to the Ebola epidemic—a crisis that resulted in a nationwide total of 11 infections and two deaths.

Ultimately it may be Trump’s own base that suffers as it internalizes the president’s mixed and confused messaging on ignoring social distancing guidelines, eschewing protective masks, swallowing hydroxychloroquine preventatively, and even accepting the inevitability of their own death (because “it is what it is” according to Trump). Even after more than 150,000 Americans have died from the virus, a majority of Republicans trust Trump’s coronavirus comments.

When Trump loyalist and former presidential candidate Herman Cain died of COVID-19, testing positive 11 days after attending Trump’s Tulsa, Oklahoma, rally without a mask on, his death did not change minds. The 74-year-old was reportedly on a ventilator during his last days, but conservatives are vehemently opposed to “politicizing” Cain’s death. Right-wing commentator and talk show host Ben Shapiro slammed those who made a connection between Cain’s refusal to take the virus seriously and his own infection and death. Shapiro said, “The kind of dunking on people after they die of COVID is pretty gross.” Certainly, Cain did not deserve to be vilified for his own sad fate. But his death offers a cautionary tale about the dangers of the Trump death cult—a point Shapiro of course refused to acknowledge.

We should hardly be surprised at this acceptance of death as inevitable. For years, conservatives have responded to gun violence with angry renunciations of any links to gun proliferation or lax gun control laws, offering instead “thoughts and prayers.” The one exception where Republicans express outrage is over the “death” of fetal cells inside women’s bodies—indicating that the fight is less about “murder,” as the anti-abortionists like to call it, than it is about controlling women’s bodies. By and large, the nation’s right-wing factions have for years wanted us to accept mass deaths and preventable mortality as a price for our “freedom.” They expect the same during a pandemic.

But we do not have to all be members of the death cult. According to a new study, states where people live the longest also have the strictest environmental laws, stronger gun control and stronger protections for minorities. These are also states that tend to be run by Democrats. California, for example, which has among the most stringent protections for minorities and the environment, also has one of the highest average life expectancy rates in the United States.

COVID-19 infections and deaths are hardly inevitable, and Americans are starting to see it. A Texas woman named Stacey Nagy penned an obituary for her late husband David that has garnered widespread attention. She wrote in her local paper that, “Family members believe David’s death was needless. They blame his death and the deaths of all the other innocent people, on Trump, [Gov. Greg] Abbott and all the politicians who did not take this pandemic seriously and were more concerned with their popularity and votes than lives.” Nagy also blamed “the many ignorant, self centered and selfish people who refused to follow the advice of the medical professionals, believing their ‘right’ not to wear a mask was more important than killing innocent people.”

Perhaps the only way out of Trump’s death cult is to speak out as Nagy has done.

The Washington Post, which interviewed Nagy, explained, “Feeling helpless, Stacey approached her husband’s obituary as a chance to speak out about how she felt her country had failed her family.” While Trump’s most loyal supporters might choose death in his service, the rest of us need not be bound by their blind, cultish and suicidal ideology.