Trump says he didn't approve of border wall project, but these key players bragged of his approval 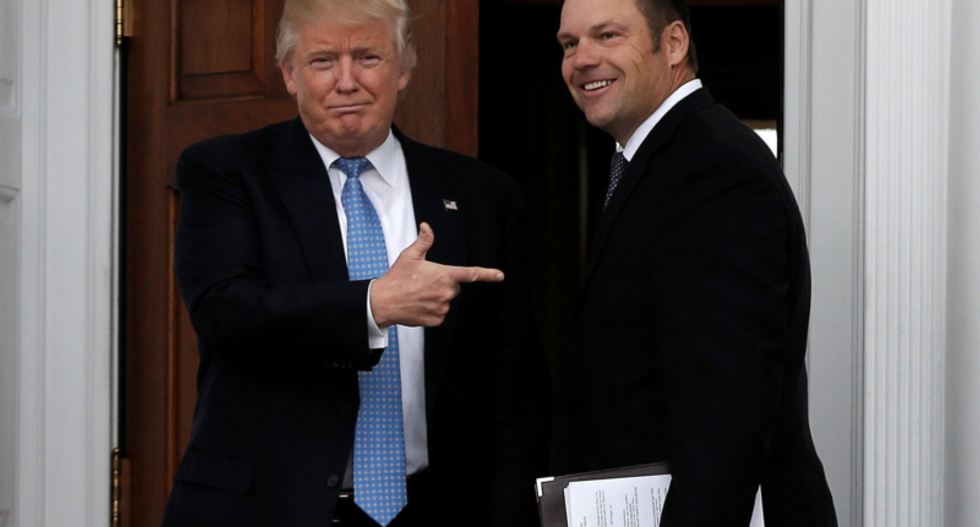 After Steve Bannon’s arrest on Thursday, Donald Trump tried to put a Grand Canyon-sized gap between himself and the “We Build The Wall” border scheme. Bannon, Brian Kolfage, Andrew Badolato, and Timothy Shea were indicted on counts of conspiracy to commit wire fraud and conspiracy to commit money laundering. The federal indictment says the crew pilfered “hundreds of thousands of dollars” and a Bannon-controlled nonprofit received more than $1 million in funds.

The federal government is seeking to take possession of the fraudulently purchased items, like the flashy boat Kolfage purchased and used in recent “Trumptilla” boat parades. Incredibly enough, Bannon and Kolfage recorded a video promoting their scam fund and folks, you are not going to believe this—Bannon actually jokes they are filming in Saint-Tropez in southern France before adding: “We are on the million dollar yacht of Brian Kolfage. Brian Kolfage, he took all that money from Build The Wall.” Kolfage then lets out an awkward laugh. Watch them joke about the fraud below. You cannot make this up.

After you collect yourself, watch the video below this because it just keeps getting better. First up, let’s revisit Trump’s statement trying to put daylight between himself and the We Build The Wall project. He repeatedly says he “didn’t like it” and thought it was “showboating and maybe looking for funds.” In a stumbling response, he repeatedly said he never approved of the project and Bannon aside, that he didn’t know anyone involved. As you’ll see below, most of the folks involved in the project said otherwise.

Let’s listen to former Kansas Secretary of State Kris Kobach, who has been described as a "racist traveling con man" because of his history of helping cities enact racist laws and then billing them to represent them in court cases they inevitably lose.

Kobach is legal counsel for We Build The Wall, because of course he is, and he recorded an “interview” with Jennifer Lawrence, who is also listed on the We Build The Wall website as the communications director for the organization. Listen to Kobach describe his conversation with Donald Trump and brag that Trump said: “I want the media to know this project has my blessing.”

It should be noted that just before Bannon’s arrest on Thursday morning by federal postal inspectors on a yacht off the coast of Connecticut, federal investigators were also serving a warrant on Lawrence and another associate, Dustin Stockton. The pair told CNN that “heavily armed federal agents” served the warrant and confiscated their cell phones.

No doubt, Kobach must be sweating. Going after lower-level employees is a sure sign they’re angling for bigger fish. And while Kobach bragged about Trump’s full-throated approval, he wasn’t alone. Lexi Churchill of ProPublica found other examples claiming Trump's full endorsement. Amanda Shea, wife of the recently indicted Timothy Shea, shared a photo of the crew with Donald Trump in August 2019, with a caption saying: “A summer of winning came to a high note in the Hamptons. I had the absolute pleasure and honor of spending time with President Trump who had a lot of questions about the wall We The People built through We Build The Wall. He was impressed, but more importantly, incredibly personable and easy to talk to. I forgot that I was speaking with one of the most powerful men in the world.”

Churchill also found an interview Kolfage did with The Gateway Pundit in which Kolfage bragged of Trump’s support, saying: “President Trump loves what we are doing."

And wherever a right-wing grift exists, you know Junior isn’t far behind. Of course he promoted the wall and congratulated Kolfage on "[t]his is private enterprise at its finest. Doing it better, faster, cheaper than anything else. What you guys are doing is amazing.”

Trump’s Acting Homeland Security Director Chad Wolf, who a federal court ruled is illegally serving in the role, called the group’s work a "game changer" and said he "welcomed" their efforts.

So it would seem this is another in a long list of lies from Donald Trump. He welcomed this group’s efforts right up until ProPublica reported on the shoddy construction of the privately built wall, which was in danger of falling over. Nevertheless, the contractor, Fisher Industries, was awarded a massive government contract to build Trump’s wall and Trump reportedly "personally and repeatedly" intervened to make sure Fisher was awarded the project.