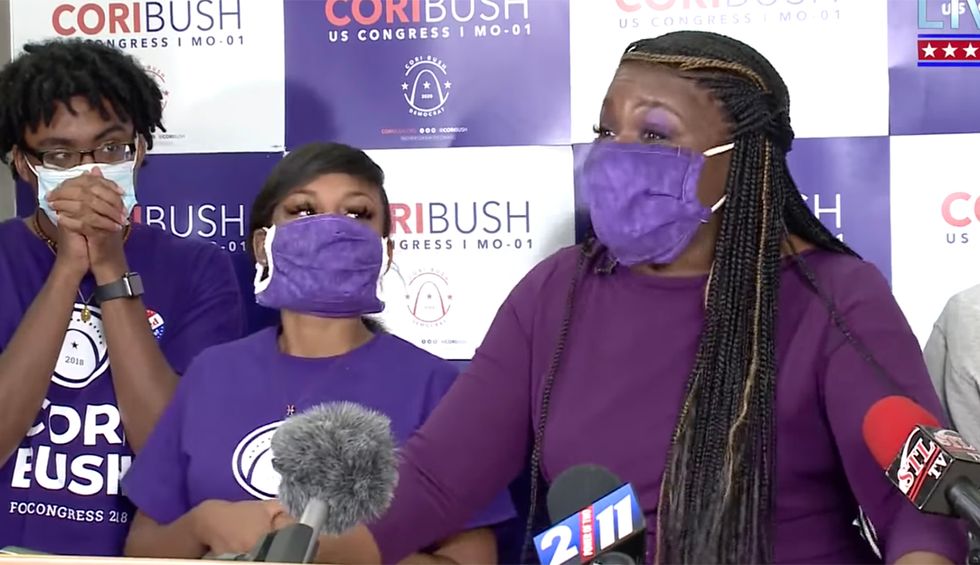 In a major upset, nurse and activist Cori Bush defeated 10-term Rep. Lacy Clay in Tuesday’s Democratic primary for Missouri’s 1st Congressional District. With 150,000 votes in, Bush led the incumbent 49-46. Bush will now be the overwhelming favorite in November in a St. Louis-based seat that backed Hillary Clinton 77-19.

The race featured two strikingly different candidates: Clay’s family has represented this district for over 50 years, while Bush only began her political career a few years ago. It started inauspiciously, with a 2016 Senate bid that went nowhere and ended with a punishing 70-13 loss in the Democratic primary to national party favorite Jason Kander (Kander went on to narrowly lose the general election).

Two years later, Bush sought to challenge Clay but raised little money. However, she earned a prominent endorsement from Alexandria Ocasio-Cortez, who, earlier that summer, had astonished the political world with her own victory against a longtime Democratic incumbent. While Bush didn't replicate AOC's success, Clay only won by a 57-37 margin, a fairly weak showing for a primary that suggested a significant number of voters were unhappy with the congressman.

Bush soon sought a rematch, and this time, the campaign was a far more competitive affair. She raised a credible amount of money and benefited from almost a quarter million in outside spending from two connected groups, the Justice Democrats and Fight Corporate Monopolies. Clay seemed to belatedly recognize he was in some trouble and began running attack ads against Bush in the final week of the race, but according to Politico, the challenger and her allies outspent him badly on the airwaves during the stretch run.

Bush argued during the campaign that Clay had not risen to meet the challenges of this moment in American history. Bush began making a name for herself through her involvement in the 2014 protests against police brutality in Ferguson, which is located in the 1st District, as well as the demonstrations that broke out in the region this spring after the death of George Floyd. Bush contrasted her record with Clay's, rhetorically asking, “When we were getting our butts kicked and I was maced in the face in Florissant a few weeks ago and people were getting beat on by police officers … did he show up the next day to say, ‘You can’t do this in my district, you can’t treat people this way?’ No, no.”

Clay portrayed himself as a traditional, workaday warrior for his constituents—a message he'd long relied on throughout his career—but he also went much further. In pushing back against Bush, who like him is Black, he claimed, “The easy, racist way to lay it out is, ‘Look at Clay—what has he done for his district? I fight for that district every single day.” Clay further denigrated the groups supporting Bush by claiming they were merely using her as a “prop,” insisting, “They use her to raise money to support their infrastructure.” Ultimately, these attacks could not save Clay from his surprise defeat.

Clay’s loss means that, for the first time in 52 years, this area won’t be represented by his clan. Clay’s father, Bill Clay, won a previous version of this seat back in 1968 and went on to become a founding member of the Congressional Black Caucus. The congressman retired in 2000, paving the way for his son, who decisively defeated St. Louis County Councilman Charlie Dooley 61-27 in the primary to succeed the elder Clay in the 1st District.

Clay faced no serious opposition for renomination until 2012, when a new Republican-drawn congressional map led fellow Democratic Rep. Russ Carnahan to run against him after Carnahan's old 3rd District was dismantled. The new seat, though, contained far more of Clay’s constituents than Carnahan’s, which gave Clay a huge advantage from the start.

The new 1st District was also predominantly Black: Carnahan, who is white, argued that he could represent the area’s “minority majority” better than Clay could, a message that got him nowhere. Clay ended up winning by a decisive 63-34 and never faced another electoral threat—until Bush.