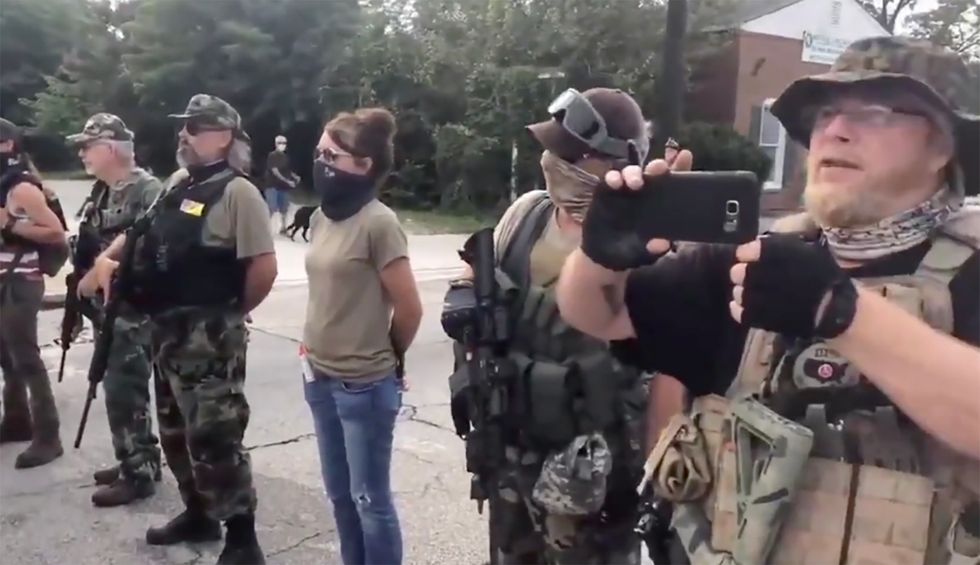 Racial justice advocates on Saturday shouted down white nationalists gathered in the town of Stone Mountain, Georgia, where the groups faced off for a number of hours.

The city of Stone Mountain said Friday that the park—which features the world's biggest Confederate monument—would be closed Saturday, and urged people to stay out of the downtown area out of "abundance of caution."

According to the Associated Press, "right-wing groups led by an Arkansas group called Confederate States III% had applied for a permit to hold a rally in Stone Mountain Park," but the permit was denied, leading the demonstrators to take to the city's streets.

Atlanta's WXIA reported on the action:

The opposing groups were loosely organized on both sides. The white nationalist demonstrators, who appeared to be far outnumbered, were seemingly composed of neo-Confederates and militia groups like the III% Security Force.

The number of protesters swelled at one point 500, the Atlanta Journal Constitution reported. "Militia groups from Arkansas and Florida have joined those from Georgia, but remain greatly outnumbered by counterprotesters from the left," the newspaper noted.

The metro Atlanta chapter of the Democratic Socialsts of America called it an "overwhelming victory at Stone Mountain today, where the fascist right was scattered and run off."

Among those organizing the counterprotest was FrontLine Organization Working to End Racism. The group said on its Facebook page Saturday that the time for the Stone Mountain cared monument to be removed is long ovedue.

"We would like to thank the racists for bringing lots of Confederate flags for people to seize and burn, so many that people on Twitter are making jokes about 'Six Flags Burned Over Georgia,'" the group wrote.

"While this pathetic showing should discourage them from showing up again for a while, as long as the carving still defaces the side of the mountain, these invasions are going to keep happening," the group added. "It needs to come down. The time is long past to #sandblaststonemountain."