'Donald Trump has infected followers with his symptoms': Yale psychiatrist 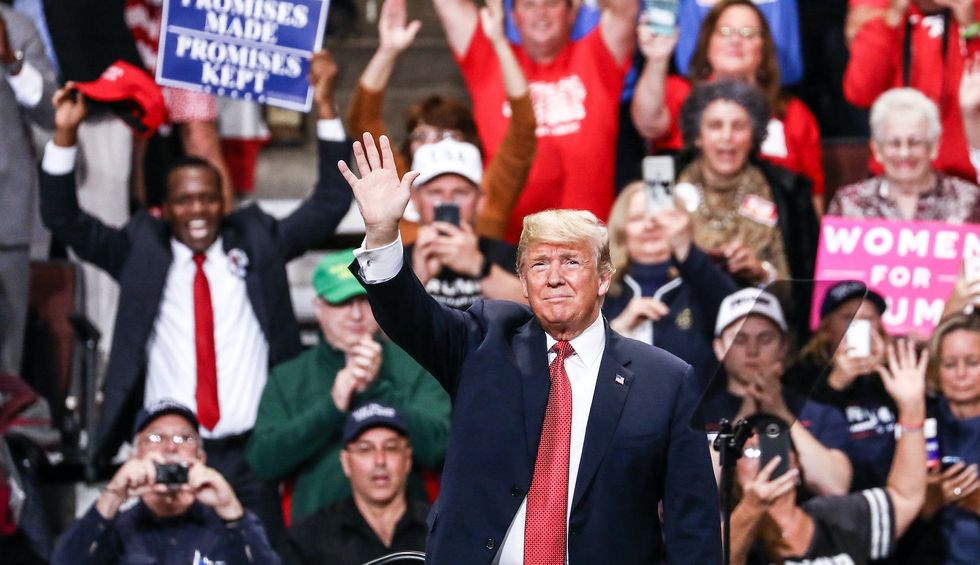 President Donald Trump at a Make America Great Again rally in Rochester, Minn., on Oct. 4, 2018. (Charlotte Cuthbertson/The Epoch Times)
Igor Derysh
and
Salon
August 29, 2020 News & Politics
A Yale psychiatrist who has sounded the alarm on President Donald Trump's mental health for years warns that the party's attempt to stoke fear in the electorate at the Republican National Convention could lead to violence against the president's opponents.

The convention featured an unprecedented number of false claims and downright lies, unhinged conspiracy theories, and hours of racial fear-mongering. Bandy X. Lee, a forensic psychiatrist at Yale School of Medicine who taught at Yale Law School, told Salon that the stoking of fear was so coordinated that pushing back could provoke a violent response.

Lee has studied violence for years. She is the author of the textbook "Violence," editor of "The Dangerous Case of Donald Trump: 37 Psychiatrists and Mental Health Experts Assess a President," and president of the World Mental Health Coalition, which recently issued a "Prescription for Survival Refill" and is releasing a new collection of statements, conference transcripts, and columns called "Documents." She recently interviewed Mary Trump at her new website about the president's mental health.

Lee said that the American Psychiatric Association, which warned against mental health professionals offering their opinions of the president's mental health, had denied the public a full view of what is happening in the White House.

"The public has been deprived of expert knowledge for too long, as it misunderstood and normalized serious pathology to a level of profound danger," she told Salon. "Professional institutions should not function as lackeys of the government but do their public function. I have criticized from the very start the way the American Psychiatric Association intervened to mislead the public into believing that they cannot hear from mental health experts about the mental health of a president. Imagine the American Bar Association prohibiting all legal professionals from commenting on societally relevant legal matters, unless they personally represent the public figures and obtain consent from them to speak about them. It is absurd, and it is about time we stop treating mental health issues so differently and esoterically, when science demands the exact opposite."

Other experts suggest a cautious, precedent-setting approach. "I think the same way that candidates have their physical health scrutinized, they could have their mental health scrutinized," Amy Barnhorst, a psychiatry professor and the vice-chair for clinical services at UC Davis, told Salon in January. "But we have to ask ourselves: What would we do with that information?"

Lee spoke to Salon about the convention and how it could affect the electorate heading into November.

As a psychiatrist who has been sounding the alarm on this presidency for years, what were your takeaways from the convention? Did anything surprise you?

It has not been surprising, but impressive in how well-orchestrated and coordinated the convention was, starting with holding the event on the White House lawn. No breach of rules or actual harm matters, as long as there is impression management, which is the key to psychological conditioning, manipulation and control. Republicans understand this power of the mind and use it perversely. Democrats do not even inform themselves of it to achieve their political goals, let alone protect the population, as we learned from our attempts to obtain consultation. This election will be more difficult than 2016, since Donald Trump has infected his followers with his symptoms, by sheer duration in office. He will also no doubt use the full powers of the presidency now to choreograph his remaining in office, regardless of the means — and I believe people realize by now that there is no limit to what he will do to "win."

Many of the speakers described a very different presidency than we've seen, one that successfully accomplished many things and beat back the coronavirus. Kamala Harris said the goal of the convention was to "soothe Trump's ego." Do you think that's accurate?

That would be the most minimal description, falling far short of what the situation demands. Politics, without grounding in reality, seems to have become a circular enterprise that has to do with nothing but power: this side impeaching only because the other side has in the past, or hesitating with a valid intervention "in case" it backfires. Journalists need to offer grounding in facts, and experts must give evidence based on the best available knowledge. Politics should be based on facts and evidence. Our system is unusual in that we not have freestanding scholarly advisory boards or other means for scientists and other intellectuals to give independent input into governance. This was criticized in the 1970s, and now it is far worse: experts convene only when politicians invite us, for their purposes, and the end result for mental health is that administrations that need consultation the most will be the least likely to seek it.

The president and other speakers repeatedly lied throughout the event. How does that affect the psychology of the overall electorate, to have a four-day stream of lies broadcast by all the major networks for four straight days?

This has now become a societal phenomenon. We do not think of mental symptoms as infectious, but they are potentially far more so than Ebola or coronavirus, since you do not need physical contact for the symptoms to transmit to millions, as long as you have emotional bonds. The end result is dramatic, as we now see before our eyes.

In our individual-oriented culture, not even psychiatrists consider this phenomenon sufficiently, but contagion is well-documented in the literature, and especially my colleague at the World Health Organization, Dr. Gary Slutkin, has long advocated approaching violence as a contagious disease. [Editor's note: Other experts have pushed back on this model.]

It is rather a mistake to believe that mental symptoms cannot transmit, when we have set up the perfect conditions for it. Those who do not succumb also generally grow exhausted and acquiesce. The good news is, like the pandemic, we can contain it if we intervened intelligently and scientifically.

How can Democrats counter Trump's lies? Is it possible to counter this non-stop narrative with facts and reality?

When lies are of a pathological degree, they may arise from delusions, which means they are resistant to facts and reality—all you will likely do is arouse defensive "doubling down." This is what you see with the growing detachment from reality and embracing of conspiracy theories like QAnon.  As evidence of the president's incapacity and criminal-mindedness mounts, increasingly outlandish explanations are necessary to hold onto cherished fixed beliefs: such as that the person one supports is a savior figure who can do no wrong. Donald Trump is masterful at cultivating and stoking this need, since his presidential—or more importantly his psychic—survival depends on it.  This level of denial can be dangerous, as challenging it could provoke a lot of violence.

How to intervene? The situation has gotten so serious, we are at a point where we need specialists. You would not order heart surgery by a politician, just because it is occurring in another politician, would you? And so why do we attempt to tackle a serious mental health problem politically? My colleagues and I have issued a "refill" to our "Prescription for Survival."  People will see that what we issued in March of this year, when we had about 1,000 COVID-19 deaths, is all the more applicable now.

This interview has been lightly edited for length and clarity.