Chaos, shared irrationality and fear: Experts explain why supporters are still clinging to Trump -- despite his many failures 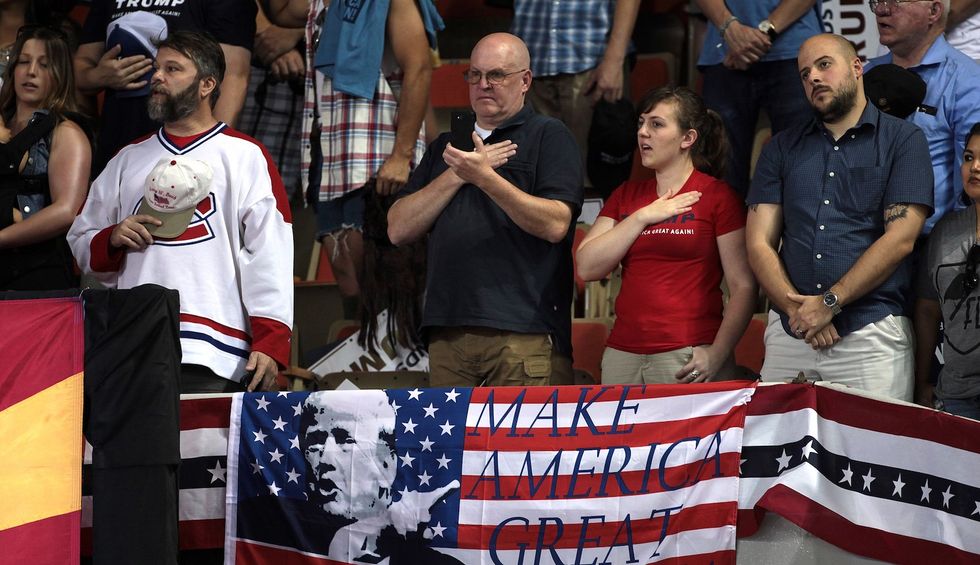 A looming question in today's political climate is:  Why do Donald Trump's devotees continue to support him despite the carnage of his well-documented failures?  Although we are in the middle of a deadly pandemic that is surging and not contained, Trump seems to maintain a base support of 35% to 40%.  What are the psychological factors that influence or underpin his supporters' attraction to him? And might this provide some perspective on how to change these supporters' minds?

Multiple psychological factors seem to influence and explain his supporters.  We have divided these factors into four major categories: Rebelliousness and Chaos; Shared Irrationality; Fear; and Safety and Order.

Some Trump supporters have a strong desire for rebelliousness and chaos, and view Trump as the perfect vehicle for achieving their personal goals.  These supporters tend to become “anti-establishment and anti-government,” even when it is against their best interest. Many are unhappy with their station in life and believe chaos in the political system will bring them important gains.  They seek immediate and sweeping changes and believe a rebellious attitude and rebellious behavior are what is necessary.  They would rather have chaos, even dangerously or regressively so, than the status quo.

These supporters believe in Trump's professed anger and rebelliousness, while often ignoring the content of the issues at hand. Trump’s talk of "draining the swamp" and of eschewing "political correctness" is attractive to them. They react emotionally and irrationally in embracing Trump’s decisions to create chaos, such as by sending federal troops into American cities to provoke hostile conflict with protestors.  They enjoy and thrive upon Trump disavowing norms, rules, and laws. Rebelliousness and chaos can be a major psychological influence, but it can have serious negative consequences such as undermining the chance for real change.

The Dunning-Kruger effect.  Some people are under-informed and misinformed and are completely unaware of their lack of information. They tend to overestimate their level of knowledge and hold onto that position.  They develop "illusory superiority" from their inability to recognize their true lack of knowledge.  In other words, some people think they know more than they do and hold firmly to their opinions. These people are resistant to change their political thinking because they believe they are the knowledgeable ones. Trump and some of his supporters have this psychological phenomenon in common; they are unable to remedy their own limitations of knowledge and their inaccurate thinking.

Magical thinking.  This is the belief that one's thoughts, feelings, ideas, or words can bring about effects in the world. Or, similarly, that one's thoughts, feelings, ideas, or words can cause something to happen. Magical thinking presumes a causal link between one’s internal, personal experience and the external physical world. This often emerges from an inability to distinguish fully between emotions and logical thoughts. Relying totally on emotion or “gut reactions” results in magical thinking. Trump engages in magical thinking almost constantly. This is especially dangerous regarding the pandemic:  "It will disappear very quickly," "We have it under control," "We may have some embers or some ashes…"  Many supporters engage in magical thinking and are encouraged and validated by Trump, leading them to align strongly with him.

Obsession with celebrity.  Some people are obsessed with celebrities and reality television.  Trump entertains them and amuses them.  Some supporters are always waiting to see what outrageous thing he says or does next.  These supporters are happy as long as they are being entertained by him. They act as if life is a “game” or a “show” that is somehow disconnected from the difficult realities of everyday life, but it is not.

Shared omnipotence.  This is a fantasy based in childhood experiences during our earliest years--due to our complete dependency upon parenting persons--that if one can find the "right" leader, then everyone can live harmoniously together forever. While this dynamic is often seen in romantic relationships, especially during the early infatuation period, this exact same dynamic can be seen in political relationships as well.  In this case, some people believe that Trump is the "right" leader who can take them to a place of harmony and never-ending happiness and success. This is an infantile fantasy that is unrealistic and unachievable because it is not rooted in the real world of adult life.  Even so, a childhood fantasy can be intense and not easily given up.

Brain reactivity to threats.  Research shows that some people have an exaggerated fear response to threats.  When presented with specific perceived threats--immigrants, democrats, protestors, socialism--conservatives' brains light up in activity and experience a need to seek safety. Trump actively encourages his supporters to experience exaggerated fear responses, such that their brains remain energized.

Fear mongering.  Terror management theory explains why fear mongering works.  When people are reminded of their mortality, which happens with fear mongering, they reflexively defend those who share their world view and their natural and ethnic identity.  Tribal identification is an outgrowth of fear mongering. Racism and bigotry are related to fear. Trump appeals to racist and bigoted supporters when he calls Muslims "dangerous" and Mexican immigrants "rapists and murderers."  This fear mongering by Trump is aimed at supporters who are vulnerable to racist and bigoted thinking because it fits with their world view. Another major fear among Trump supporters is falling behind financially and losing the economic capacity to control their lives and protect themselves.  A third major fear among Trump supporters is of socialism and believing that capitalism is being threatened and even destroyed. Trump is very adept at focusing on these specific fears among his supporters, using key words and names to trigger and stoke their emotional concerns. Trump supporters believe that he is capable of protecting them from their fears. And when they feel protected, they overlook his offensive and outlandish behavior.

Conspiracy theories.  Certain people are attracted to conspiracy theories because of their vulnerable personalities and even by mental illness.  Life is complex and perplexing and at times dangerous. It is not simple or safe. Research shows that feelings of anxiety make people think more conspiratorially. A conspiracy theory can provide comfort by identifying a convenient scapegoat and thereby making the world seem much more straightforward and controllable. Fantasies that remove fear and doubt can be especially attractive, even if they are unrealistic and irrational. People who believe in conspiracy theories are more likely to overestimate the likelihood of co-occurring events, to attribute intentionality where it is unlikely to exist, and to have lower levels of critical thinking. Trump has voiced many conspiracy theories: Spygate, Obamagate, Deep state, Trump Tower wiretapping, and others.

Authoritarianism.  Several traits characterize authoritarianism: deference to authority, aggression toward outgroups, a hierarchical view of the world, and the belief that the world is dangerous and threatening. Some people believe in having an authoritarian leader because they feel protected and safe by a strong, powerful presence. Trump's authoritarian leanings are highly attractive to these supporters. Interestingly, research studies have shown the joint power of authoritarianism and social dominance orientation to predict far-right-wing voting in the United States and Europe.

How To Change Supporters’ Minds

Based on our understanding of these psychological influences, each Trump supporter must be considered individually.  Not all supporters are connected to Trump in the same way or for the same psychological reasons.  For each Trump supporter, an individual assessment is required as to whether it might be best to address rebelliousness and chaos; shared irrationality; fear; and/or security and order.  Rational arguments aimed at each of these categories, separately or in some combination, might be most effective.

Trump supporters are tied to him based on multiple and complex psychological principles and phenomena.  To continue to respond to them as if they are psychotic or evil is a grave mistake and will not lead to change.  Identifying the category or categories of psychological influence for each person can be a much more productive strategy.

There are three months to go before our presidential election.  Let us use this time to focus our energies on changing minds based on an understanding of psychology. Name-calling and dismissive statements will not work. Lumping all supporters together will not work. Psychology holds the answer.

John M. Talmadge, MD, is a psychiatrist in Dallas, Texas.