Chair of US Postal Service board under fire over RNC appearance backing '4 more years!' for Trump 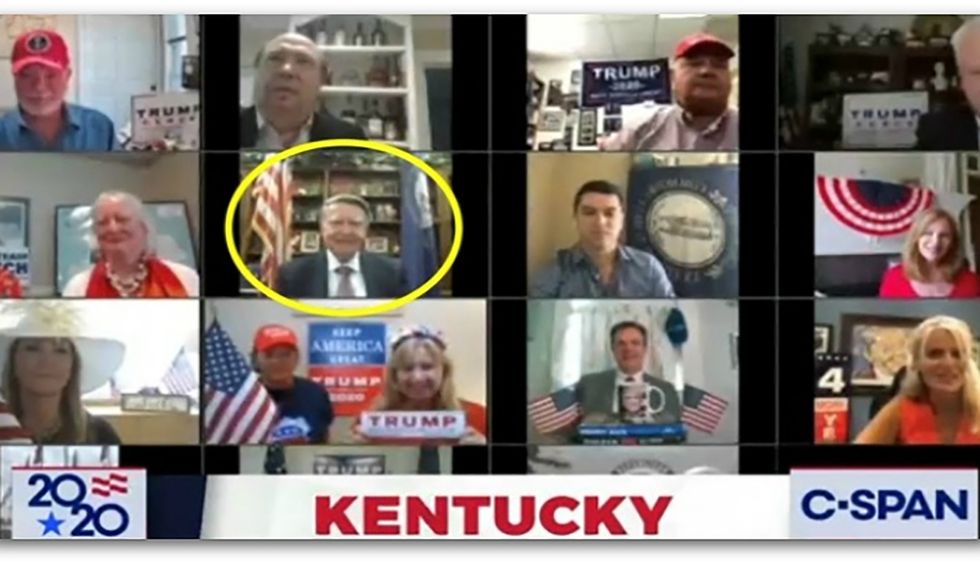 Robert Duncan, the Trump-appointed chairman of the U.S. Postal Service Board of Governors who previously served as head of the Republican National Committee, is facing backlash over his little-noticed appearance in a prerecorded GOP convention video Monday night and calls to resign for his past role in the party's nationwide voter suppression efforts.

Duncan's participation in a convention clip alongside other supporters of President Donald Trump was first highlighted by House Oversight Committee Chairwoman Rep. Carolyn Maloney (D-N.Y.), who noted in a press release Tuesday that the board chair "appeared in a prerecorded video shown at the Republican National Convention in an effort to help President Trump get reelected."

In the seconds-long clip, which aired just hours after the board chairman testified before the House Oversight Committee, Duncan claps and gestures with four fingers as others chant, "Four more years!"

For those who may have missed it, Maloney's office screencapped and spotlighted Duncan's appearance:

Donald Sherman, deputy director of Citizens for Responsibility and Ethics in Washington (CREW), told Common Dreams that while Duncan's participation in the RNC video does not "appear to be a violation of the Hatch Act because he's not using his official authority as a government employee," it is "pretty obtuse given the legitimate concerns raised by Congress and the public about potential partisanship at the Postal Service."

"It certainly doesn't give the American public confidence that he and the Trump donor that he helped install as postmaster general are going to take concerns about voting by mail and about potential partisanship seriously," Sherman said. "Instead of bowing out of this widescreen video conference call at the RNC, he decided to put himself in the center of it."

Appointed to the USPS Board of Governors by Trump in 2017 and confirmed by the Senate in 2018, Duncan has largely flown under the radar amid the national uproar over Postmaster General Louis DeJoy's mail operation changes that have dramatically slowed package deliveries nationwide just months ahead of an election that could hinge on mail-in ballots.

According to the New York Times, Duncan suggested DeJoy—a Republican megadonor to President Donald Trump—as a postmaster general candidate earlier this year, despite DeJoy's potential conflicts of interest and lack of experience working for the Postal Service. The board unanimously appointed DeJoy in May after one experienced board member resigned in protest.

In a statement Tuesday, Maloney slammed Trump for installing a "GOP partisan as chairman of the Board of Governors, who turned around and inserted his fellow Republican fundraiser as postmaster general."

"Both of these officials are longtime Republican operatives, fundraisers, and megadonors," added Maloney, "and they are overt about their efforts to help Donald Trump win in November."

Duncan and DeJoy both testified before the House Oversight Committee Monday amid nationwide outrage over mail backlogs, the removal of mail-sorting machines, and other changes to USPS service under DeJoy's leadership of the nation's most popular government institution. Voting rights advocates and postal workers have warned that the changes constitute a deliberate effort to sabotage the November election and privatize USPS.

While DeJoy was the target of the majority of lawmakers' questioning, Rep. Raja Krishnamoorthi (D-Ill.) spotlighted the fact that Duncan—while serving as the top official on the USPS Board of Governors—is simultaneously on the boards of two major Republican super PACs: the Senate Leadership Fund and American Crossroads.

Krishnamoorthi also pointed to Duncan's bio on the official USPS website, which notes that as chairman of the RNC from 2007 to 2009, Duncan "raised an unprecedented $428 million and grew the donor base to 1.8 million—more donors than at any time in RNC history."

The Illinois Democrat went on to note that Duncan was quoted in a 2008 Republican fundraising letter saying, "The Obama-Biden Democrats and their liberal special-interest allies are trying to steal their election victories from Republicans."

Duncan responded that he has "no knowledge" of the letter. When Krishnamoorthi quoted another 2008 fundraising letter in which Duncan was quoted warning that "Democrats will soon be trying to pad their totals at ballot boxes across the country, with votes from voters that do not exist," Duncan said he doesn't "believe anyone at this point who is a nominee of the major parties is trying to steal the election."

"That," Krishnamoorthi replied, "would be in contravention of what the president said in a tweet on August 20: 'They are trying to steal this election.'"

In a letter (pdf) to Duncan on Monday, Kyle Herrig, president of watchdog group Accountable.US, raised alarm about the USPS board chair's "extensive past involvement in voter disenfranchisement efforts" and urged him to resign from the Postal Service immediately.

Herrig noted that during Duncan's time "as general counsel of the Republican National Committee and as a member of the Kentucky Republican Party's executive committee, numerous state parties—including Kentucky's—were accused of coordinated voter suppression efforts via the banned practice of voter caging in an attempt to sway the 2004 election."

Your role in the potential voter suppression tactic deployed by Kentucky's Republican Party is particularly suspect given your positions in both the state party and the Republican National Committee, as internal emails suggest the groups were in close coordination to carry out these efforts.

Your history in Kentucky alone should be reason for grave concern about your ability to protect Americans' access to voting. But paired with the Republican National Committee's 2008 effort to reverse the voter caging ban while you served as Chairman, you have demonstrated that you do not have the requisite commitment to preserving our democracy and have no place serving on the USPS Board of Governors, let alone as its chairman, at this critical time.

"As we continue to weather the Covid-19 public health crisis and infection risk remains high, experts expect to see more requests to vote by mail in many states than during any previous election cycle. It is therefore more crucial than ever that USPS leaders are committed to protecting voters'—all voters'—ability to cast mail-in ballots easily, efficiently, and successfully," Herrig wrote. "Your extensive history of involvement in voter disenfranchisement efforts prove that you are not fit to fulfill that grave responsibility."