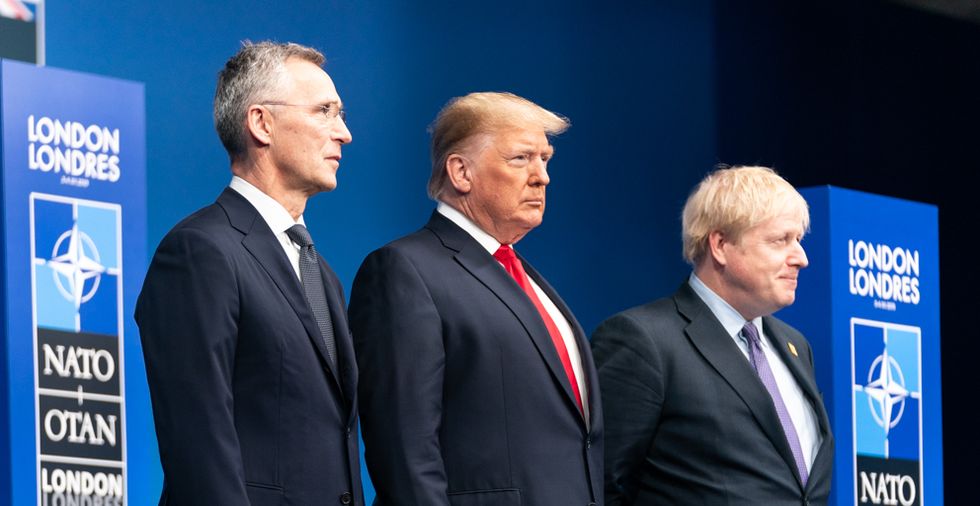 The Trump regime defines its nationalism largely negatively by focusing on three components: Obama, Obamacare, and globalization. These are what it blames most for what ails U.S. society, for the “un-Americanism” that it most opposes. The Trumpian opposition wraps itself in thin “philosophical” rationales. One of those is racism expressed through an obsessive rejection of Obama and all things Obamian. The racism must simultaneously be explicitly denied the better to cover its implicit, repetitive operation. The second is a primitive libertarianism. It rejects Obamacare as government intrusion upon individual liberty. The third (derived in part from ideologues like Steve Bannon) is a rejection of globalization. This emerges from Trump’s hostility toward immigrants and China and also his many invocations of “America first.”

Trump’s nationalism is clear, but is U.S. capitalism turning nationalist too?

Broadly, U.S. employers neither think nor care much about racism. Some use it to divide employees, keep them from unifying around workplace issues, labor unions, unwanted political initiatives, etc. Most ignore it unless and until gross racism brings victims and anti-racists into the street in ways that threaten their commerce or the economic status quo. Then lip service against racism flows. Corporations make mostly cosmetic adjustments hyped by major public relations efforts. At best, a few genuine, usually marginal improvements are achieved in racial integration and the excruciatingly slow decline of institutional racism.

U.S. employers care less about Obamacare. They know and appreciate that it was a compromise endorsed by the medical-industrial complex. On the one hand, they worry a bit, as usual, about enhancing the government’s position in private health care markets. But also as usual, when government intervention profits private capitalists, they are very interested and supportive. If Obamacare can help shift health care costs from employers onto the general public and onto employees, most employers will support it. Once again, fickle corporate support for laissez-faire, conservative, libertarian ideals can and will irritate the advocates of those ideologies.

Employers are much more concerned and agitated about the Trump regime’s turn toward economic nationalism. It threatens the profitability of the already huge U.S. corporate investments in the production of goods and services overseas and in global supply lines. It risks advantaging foreign competitors in overseas markets over U.S. multinationals active or interested there. Globalization meant profit-making capitalism practiced internationally (with limited government intervention) by private capitalist corporations, state capitalist enterprises, and partnerships between and among them. The beneficiaries of globalization lament when nationalist economic policies disrupt global supply lines, provoke trade and tariff “wars,” and rationalize government attacks on individual corporations. U.S. multinationals may allocate donations to Trump vs. Biden, GOP vs. Dems—and likewise their vast media spending—according to what best supports the globalization they favor.

So far, the Trump regime has wobbled ambivalently between base-pleasing nationalist rhetoric and a necessary subservience to globalized U.S. capitalism. The regime hoped that a massive profit-oriented corporate tax cut in late 2017 would buy global corporations’ acquiescence in a nationalist turn. That hope has not been realized. Instead, we have herky-jerky Trump policy. First it promises global compromise and resurgent world trade and investment, then it rails against untrustworthy, evil trade and investment partners. It raises and lowers both tariffs and threats to impose tariffs, often in dizzying sequence.

Only parts of the U.S. business community are focused exclusively on the domestic market or do not depend on imported inputs. Those parts remain too small by themselves to sustain a Trump turn to nationalism. Consider one statistic: tariffs as a share of the value of U.S. imports fell from almost 50 percent right after the Civil War to 1.2 percent in 2008. The protectionism so central to economic nationalism was largely abandoned across recent U.S. history. Therefore, the political project of shifting the United States toward economic nationalism poses a heavy lift for any government. The key question becomes whether enough U.S. corporations might change their many-layered investments in globalization and become backers of a nationalist turn.

The answer hinges on capitalist competition. U.S. corporations’ competitive growth opportunities since the 1970s focused heavily on technical change and foreign investments in the context of increasing free trade globalization. Telecommunications, the internet, social media, robots, and artificial intelligence continue to drive very profitable industries. Relocating formerly U.S.-based production abroad and producing for fast-growing foreign markets have been and are very profitable. Globalization has been the reality and the consequent policy imperative especially over the last half-century.

But the U.S. global capitalist leadership of the last 50 years is now ebbing. A recent Foreign Affairs article flatly declares that U.S. hegemony is now ending and “isn’t coming back.” China is the chief competitor, but other countries too are fielding or threatening soon to field effective competitors. If a U.S. multinational is losing its competitive edge in a global market, it might support nationalist measures giving it privileged, discriminatory access to a still large U.S. market. U.S. multinationals might be willing to leave to others the competition to capture a fast-growing Chinese market if those U.S. firms got privileged access, via nationalism, to a slower-growing U.S. market and/or if U.S.-China hostilities sharpen. If a nationalist turn in U.S. policy were combined with massive new U.S. government subsidies and further tax cuts for U.S. multinationals, the latter might support that nationalist policy turn. If they did, it would signal a high degree of U.S. corporate desperation.

A nationalist turn in the United States would provoke more or less matching and retaliatory nationalist turns elsewhere. In that case, all participating countries would likely lose economically. The world’s other major economies—their business communities and their leading politicians—are watching closely as Trump’s foreign trade and investment policies evolve. They hesitate to incur the large costs of possible nationalist turns inside their countries. They are waiting to see if what Trump has so far done ambiguously will harden into the dominant U.S. policy over the coming years, with or without Trump. A Biden victory might abandon the nationalist turn and renew the largely pro-globalization consensus before Trump. Then again, if confronted with corporate pressures the other way, centrist Democrats would likely bend.

Perhaps the plan (even if not yet explicit and conscious) is to rebuild U.S. hegemony. This time “multilateralism” would not be the mechanism that sustained it. That worked well over the last 75 years, but it may now be exhausted. A new U.S. nationalism might then aim to subordinate each other part of the world (country or region), bi-laterally, as a “partner.” Perhaps such a plan could obtain the loyalty of nationalists without compromising the basic interests of globalists.

In short, more than a viral pandemic, a global capitalist crash and climate change weigh on world trade and investment. So too does the question of whether globalized capitalism produced so many victims and critics that it cannot survive no matter how it might be reconfigured. If so, will the consequent transition hold on to capitalism but drop “globalization” to become instead a tense, dangerous world of contending nationalist capitalisms? Or, alternatively, will we see a transition to a post-capitalist global system of quite differently organized enterprises, political institutions (including nation-states), and movements of productive resources and products across its geography?