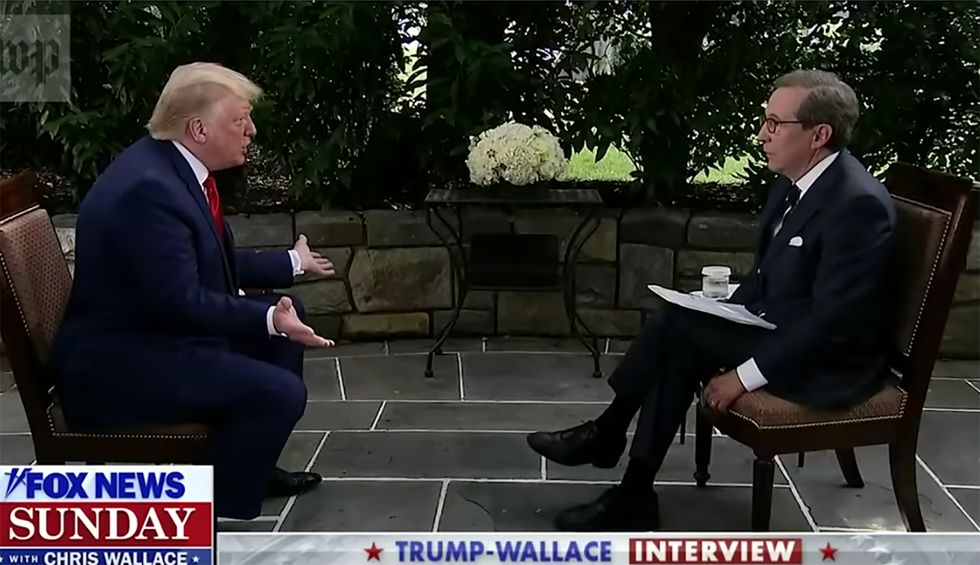 If you have difficulty getting through interviews with Donald Trump. Brace yourself for his latest. On Fox News Sunday, Trump discussed a variety of topics with host Chris Wallace this morning including his take on the Confederate flag. Not only did he defend his stance against removing Confederate symbols and statutes throughout the country, but he added the flag did not offend him because it serves as a representation of the South—once again failing to acknowledge its racist history.

"When people proudly hang their Confederate flags, they're not talking about racism. They love their flag, it represents the South,” Trump said. He even had the audacity to attempt to compare it to movements against racial injustice.

"I'm not offended, either, by Black Lives Matter," Trump said. "That's freedom of speech." This statement, like others made by Trump,  contradicts former allegations he has made including calling a Black Lives Matter sign in New York a “symbol of hate.”

He continued on to deflect and make use of a Republican popular phrase “cancel culture.” Trump said: “You know the whole thing with cancel culture—we can’t cancel our whole history. We can’t forget that the north and the south fought.”

Earlier this month, Trump also criticized NASCAR's ban of the Confederate flag from events arguing that it inflicted on one’s freedom of speech. But it doesn’t end there; he also threatened to veto an amendment bill to the National Defense Authorization Act that would remove the names of Confederate generals from military bases within a year. The fact that the bill has support from military leaders and both parties in Congress does not matter to Trump.

"I don't care what the military says. I'm supposed to make the decision," he said. "Fort Bragg is a big deal. We won two world wars—nobody even knows General Bragg. We won two world wars." He continued on to question what the military bases would be renamed to. "What are we going to rename it? You going to name it after the Reverend Al Sharpton? What are you going to name it, Chris?"

Trump’s interview follows nationwide calls to rename bases and knockdown symbols of Confederate leaders still standing throughout the country. During the ongoing protests against both police brutality and racial injustice, some of these symbols have been removed but many remain in prominent locations. These statues and monuments symbolize the racist history America is made of and systemic injustice it still perpetuates. They must be removed for the country to progress. Failing to acknowledge the importance of renaming military bases in addition to removing such statutes is not only ignorant, but depicts a lack of leadership.

Here are some highlights from the interview, including Trump’s segment on the Confederate flag.