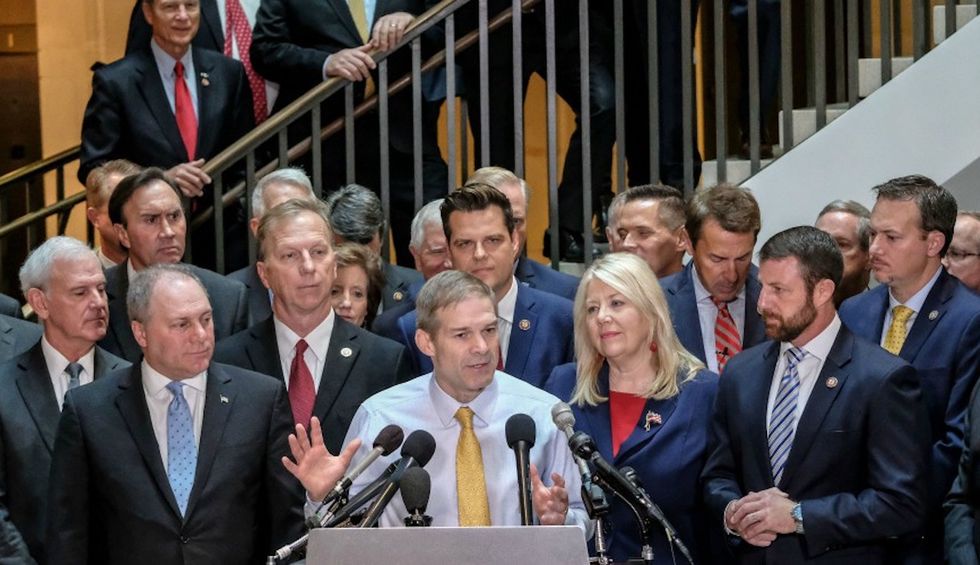 Even if November's electoral tsunami is still just a rumor on the horizon, that big blue wave already is rocking Republican boats. We can sense something different in the distance, not only because the polls say so but because political journalism has departed from its banal narrative.

Instead of the repetitious dullness of "Democrats in disarray," there is the freshly entertaining spectacle of "Republican civil war."

Indeed, the Democratic Party appears exceptionally united, following a primary season that threatened to erupt in division over its own ethnic, gender, geographic and ideological diversity. Instead of the angry and sometimes ugly recriminations that marred the aftermath of the 2016 primaries, which contributed heavily to Hillary Clinton's defeat in the Electoral College, the 2020 competition concluded with affirmations of common purpose. And unlike 2016, the followers of Bernie Sanders seem ready to fall in behind the nominee, as their candidate promptly and fervently urged them to do. Very few Sanders supporters are telling pollsters that they will vote for anyone except Joe Biden.

In this cycle, the Republican Party is tearing itself apart from within rather than marching in their normal obedient lockstep. The prospect of doom rarely unites any political constituency, particularly when that group is motivated by power rather than principle or patriotism. What was once the Grand Old Party is now merely Grifters on Parade -- and as President Donald Trump's approval ratings decline, GOP elected officials are looking for someone to blame. This time they're aiming at each other.

Within the House Republican Conference, the ultra-right Trump cultists revolted this week, aiming to oust Rep. Liz Cheney, R-W.Y., the only woman in their leadership. Florida Rep. Matt Gaetz and Ohio Rep. Jim Jordan, among others, accused Cheney of insufficient loyalty to the president and demanded that she step down. Although Cheney actually votes more reliably with Trump than either Gaetz or Jordan, she had the temerity to suggest that Republicans follow the advice of Dr. Anthony Fauci, the government's chief epidemiologist, since the coronavirus pandemic is now raging out of control across the red states.

Using science to stem a disease that has taken nearly 150,000 lives in four months is now Republican heresy.

On the other side of the Capitol, Sens. Ted Cruz, R-Texas, and Rand Paul, R-Ky., are furious with Sen. Tom Cotton, R-Ark., Majority Leader Mitch McConnell, R-Ky., and other members of their caucus for considering another round of economic assistance for families, states and municipalities. Confronted with the bankruptcy of fiscal "conservatism," the senators can't agree on whether to pass a new COVID-19 relief bill. Evidently, Cruz and Paul would let families and cities starve, while Cotton -- and perhaps Trump -- fears the political consequences of that cruel and destructive attitude.

So unemployment benefits are due to expire at the end of July, leaving tens of millions of Americans in potential destitution because the Senate Republicans fumbled this responsibility.

If the election were held today, the Republicans would risk losing the White House, the Senate majority and even more House seats. The peril to their party expands every day, as this president continues to fail in dealing with the pandemic and the economic ruin it has wrought. As public confidence in Trump vanishes, his most devoted followers in the House and the Senate only become more obsequious. But the brighter Republican officials are starting to realize that this disastrous presidency may destroy their party, and that obsessive loyalty to Trump may become a suicide pact.

The strife now erupting among Republicans is a product of Trump's incompetence and corruption, none of which disturbed his party until they noticed that their own hides might be in danger. For months and years, they have let him and his ruinous administration run wild, either too cowardly or too cynical to utter a word of dissent.

Now the waters are getting rough; the ship of state is starting to founder; and soon the rats will be leaping over the gunwales. Trump is perfectly cast as the mad and selfish commander of a sinking vessel.

If the fate of the nation weren't at stake, this would be highly entertaining. Bring popcorn anyway.