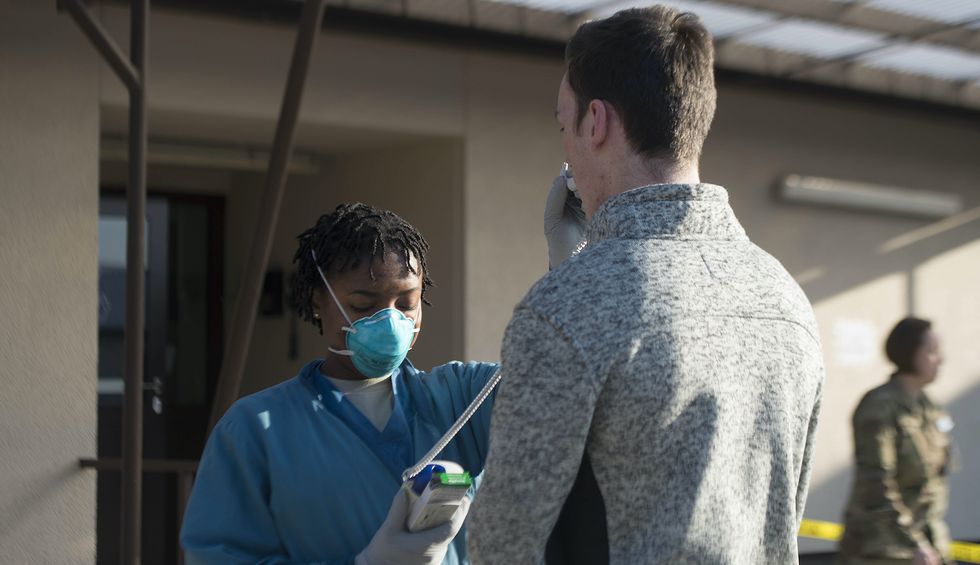 President Donald Trump has claimed that testing in the United States for the coronavirus is "the best in the world" and has even suggested there is too much testing.

But the "short answer" to a New York Times' headline asking on Friday, "Is Your State Doing Enough Coronavirus Testing?" is that moststates are not, the director of the Harvard Global Health Institute said Friday.

According to researchers at the institute and the Covid Tracking Project, the number of daily coronavirus tests being conducted in the U.S. is only 39% of the target rate needed to mitigate the spread of the virus.

Without a standardized federal testing strategy, states have been left to procure and administer tests themselves, leaving some of the hardest-hit states testing at some of the lowest rates in the nation.

Nationwide, the U.S. tested 634,000 people per day in the last week. According to epidemiologists at Harvard, with an outbreak as large as the one in the United States, 1.6 million people must be tested per day to mitigate the virus. Suppressing the virus, as New Zealand, Iceland, and Vietnam have, would take far more daily tests.

Trump has repeatedly bragged about the nation's testing regiment but called for the testing rate to be slowed down or halted, falsely claiming that more testing is the reason for an increased infection rate. On Wednesday, a Republican state lawmaker in Ohio pleaded with constituents  to "stop getting tested!" and claimed that doing so is "giving the government an excuse to claim something is happening that is not happening at the magnitude they say it is happening."

"We aren't doing too much testing," said Ashish Jha, director of the Harvard Global Health Institute. "We're doing too few."

To meet the level of testing recommended by Harvard experts, the U.S. would have to double its daily rate, the Times reported.

"At minimum there should be enough daily capacity to test anyone who has flu-like symptoms and an additional 10 people for any symptomatic person who tests positive for the virus," wrote Keith Collins at the Times.

Epidemiologist Abdul El-Sayed pointed out that the U.S. has "been at this since February" but still lags behind several other countries in its testing capacity, despite having the world's largest outbreak of Covid-19.

While the U.S. has performed more total tests than any other country, Trump's claim that "America leads the world in testing" is inaccurate based on the per-capita rate of testing, according to FactCheck.org.

Denmark has tested more people per capita than any other country as of July 9. Russia, Israel, Iceland, and Australia have also tested far more people per 1,000 residents than the United States.

FactCheck.org also pointed out that the U.S. fell far behind other countries in the crucial early weeks of the pandemic. South Korea was lauded for its testing capacity in early March, when it was testing 10,000 people per day. At the time, the U.S. provided no public information about how many people it was testing. The U.S. only reached South Korea's daily testing capacity on April 15, when South Korea's case numbers had already begun to fall dramatically.

"Economic researchers at the Federal Reserve Bank of St. Louis noted in an April 22 paper that South Korea's early testing 'seems to have paid off,' while U.S. 'inaction' resulted in more confirmed COVID-19 cases," wrote Lori Robertson and Eugene Kiely at FactCheck.org.