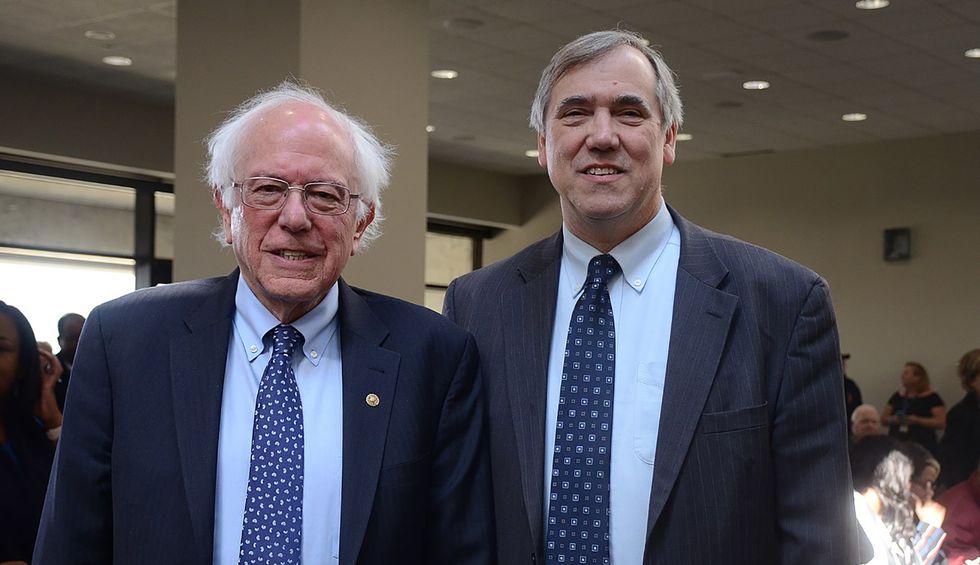 Oregon Sen. Jeff Merkley on Saturday announced plans to introduce an amendment barring the Trump administration from deploying federal law enforcement to U.S. streets as backlash continues over the White House's use of unidentified agents to violently crack down on protests in Portland and detain demonstrators without cause.

"When I get back to D.C. next week, I will be introducing an amendment to the defense bill with Sen. Ron Wyden to stop the Trump administration from sending its paramilitary squads onto America's streets," Merkley tweeted, referring to the National Defense Authorization Act (NDAA) currently under consideration in the Senate. "We won't let these authoritarian tactics stand."

Late Friday, as Common Dreams reported, Oregon Attorney General Ellen Rosenblum sued the Department of Homeland Security (DHS), the U.S. Marshals Service, the U.S. Customs and Border Protection, the Federal Protection Service, and their agents for violating "the civil rights of Oregonians by seizing and detaining them without probable cause."

The legal complaint (pdf) names "John Does 1-10" as defendants because "they have made it impossible for them to be individually identified by carrying out law enforcement actions without wearing any identifying information, even so much as the agency that employs them."

According to the New York Times, "the tactical agents deployed by Homeland Security include officials from a group known as BORTAC, the Border Patrol's equivalent of a SWAT team, a highly trained group that normally is tasked with investigating drug smuggling organizations, as opposed to protesters in cities."

The Trump administration has been using unidentified federal officers to respond to protests over the police killing of George Floyd since early last month, a practice that alarmed journalists, civil liberties groups, and lawmakers.

"We cannot tolerate an American secret police," Sen. Chris Murphy (D-Conn.) tweeted in response to videos of unidentified officers patrolling the streets of the nation's capitol and refusing to answer questions about who they work for.

Oregon's governor, members of the state's congressional delegation, and Portland's mayor, both Democrats, have demanded that the Trump administration withdraw all federal law enforcement agents from Portland.

"This is absolutely unacceptable," Oregon Gov. Kate Brown, a Democrat, said in an appearance on MSNBC Friday. "They only want to escalate. They want to dominate the streets."

Portland's Democratic Mayor Ted Wheeler slammed the federal agents as Trump's "personal army" and said they have only heightened tensions in the city.

"This is part of a coordinated strategy of Trump's White House to use federal troops to bolster his sagging polling data," Wheeler said.

But even as Wheeler—who also serves as police commissioner—called on federal agents to leave Portland, Oregon Live reported Saturday that Portland police have been working "in tandem with federal officers" to beat back demonstrations.

In a statement late Saturday, Portland City Commissioner Jo Ann Hardesty said "we know Portland police are collaborating with this federal occupying force" and implored Wheeler to "stop denying the violence being perpetrated by our own police force."