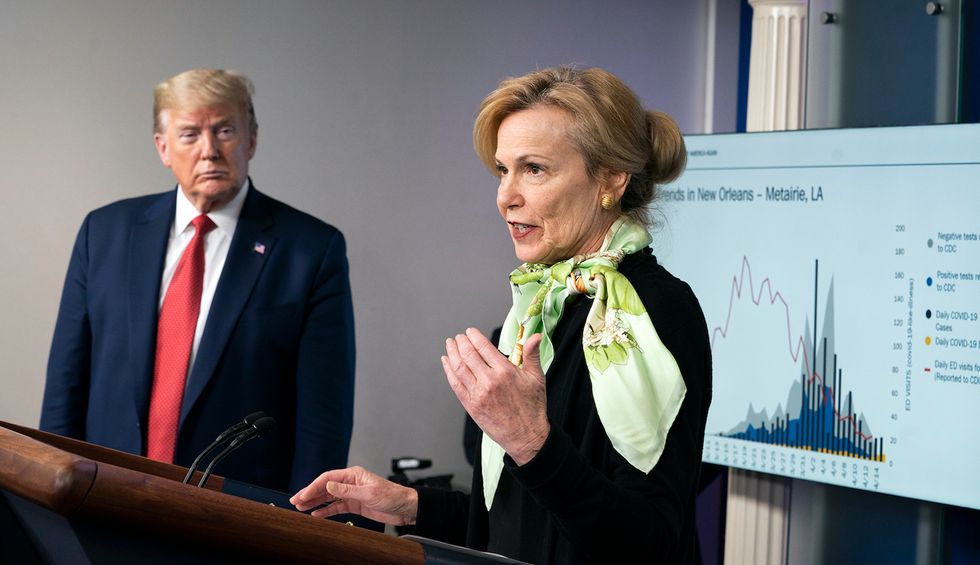 Conducting over two dozen interviews with senior administration and public health officials, and consulting a cache of previously unavailable documents, the New York Times has uncovered what now seems obvious to everyone except perhaps Trump’s dwindling and ignorant base of supporters: the Trump administration deliberately sought to shift blame for its botched handling of the Covid-19 pandemic to the states, in what the Times authors aptly characterize as a “catastrophic policy blunder” and “one of the greatest failures of presidential leadership in generations.”

A team in the White House led by President Trump’s chief of staff, Mark Meadows, met daily on the crisis, but the ultimate goal was shifting responsibility. “They referred to this as ‘state authority handoff,’ and it was at once a catastrophic policy blunder and an attempt to escape blame for a crisis that had engulfed the country — perhaps one of the greatest failures of presidential leadership in generations,” write Michael D. Shear, Noah Weiland, Eric Lipton, Maggie Haberman and David E. Sanger.

Other than Trump himself, two of the officials taking a lead role in causing this catastrophe, according to the Times, were Chief of Staff Mark Meadows and White House Coronavirus Task Force leader Deborah Birx. Birx’s role in delivering deliberately upbeat information to Trump (in the face of dire negative news directly to the contrary) played a major role in Trump’s decision-making, according to the Times, which refers to her as the “chief evangelist” portraying the threat from the virus as “fading.” (The Times article in fact contains an entire, devastating segment explicating Birx’s influence on the policy; she declined to be interviewed for the article).

For scientific affirmation, they turned to Dr. Deborah L. Birx, the sole public health professional in the Meadows group. A highly regarded infectious diseases expert, she was a constant source of upbeat news for the president and his aides, walking the halls with charts emphasizing that outbreaks were gradually easing. The country, she insisted, was likely to resemble Italy, where virus cases declined steadily from frightening heights.

As late as April 11, Birx was telling Trump that the “nation was in good shape,” while Meadows was casting the handling of the crisis in ideological terms, as an issue that the states should handle, rather than the federal government. Birx was also largely instrumental in developing a plan that shunted responsibility for the pandemic away from the federal government and onto the cash-strapped states. Not surprisingly, these were the exact types of messages guaranteed to please Trump (who from Times investigation was clearly too uninterested and self-absorbed to interpret any data himself).

Over a critical period beginning in mid-April, President Trump and his team convinced themselves that the outbreak was fading, that they had given state governments all the resources they needed to contain its remaining “embers” and that it was time to ease up on the lockdown.

The results of this deliberate exercise in self-delusion manifested themselves in an overall attempt to minimize the necessity of lockdowns and social distancing, with the catastrophic results we are now witnessing today. Importantly, the Times investigation makes clear that Trump’s policy was not simply a matter of misjudgments, but “a deliberate strategy that he would stick doggedly to as evidence mounted that, in the absence of strong leadership from the White House, the virus would continue to infect and kill large numbers of Americans.”

It was also a strategy designed solely with Trump’s re-election prospects in mind, and extended to deliberately and “disdainfully” ignoring scientific studies which contradicted the Trump line, “muzzling” voices advocating a more safety-oriented approach, and “continu[ing]to distort reality even as it became clear that his hopes for a rapid rebound in the economy and his electoral prospects were not materializing.”

The Times’ report includes several facts not previously disclosed. First, nearly the entirety of the administration’s policy was formulated by aides with no public health or scientific background whatsoever. Second, Trump’s perverse “campaign” against testing was intentional and in fact directly related to shifting wholesale responsibility to individual states so that he, Trump, would not be blamed for the catastrophe.  Third, the silencing of Fauci through limiting his media appearances was deliberate as they were afraid he would “go off message” and start telling Americans the truth about skyrocketing infection rates; and fourth, California’s governor was told by administration officials that if he wanted bulk deliveries of nasal swabs to test for Covid-19 infections, he would have to call Trump personally and thank him before they would be delivered.

The article also confirms that it was Jared Kushner, as well as administration officials acting on his cues, who was largely influential at the federal level in depriving states of the number of tests necessary to adequately combat the virus.

But the enabler of the administration's failure, at least according to the emphasis implicit within the Times’ report, was Birx. It was Birx who came up with the language referring to individual hotspots and outbreaks as “embers” that simply needed to be tamped down. She repeatedly and persistently likened the situation in the U.S. to the experience of Italy, which turned out to be disastrously wrong. She ignored warnings that the models she continually hyped to White House Officials might not be accurate. The authors of the University of Washington model, in particular, were alarmed when administration officials began using their model to try to predict what would occur if social distancing measures were abandoned.

The Times article is a devastating portrait of a slow-motion train-wreck in the making, with the health and safety of the American public repeatedly treated as an afterthought to Donald Trump’s political fortunes.

Unfortunately, as we now know, that train is now bearing down on all of us.