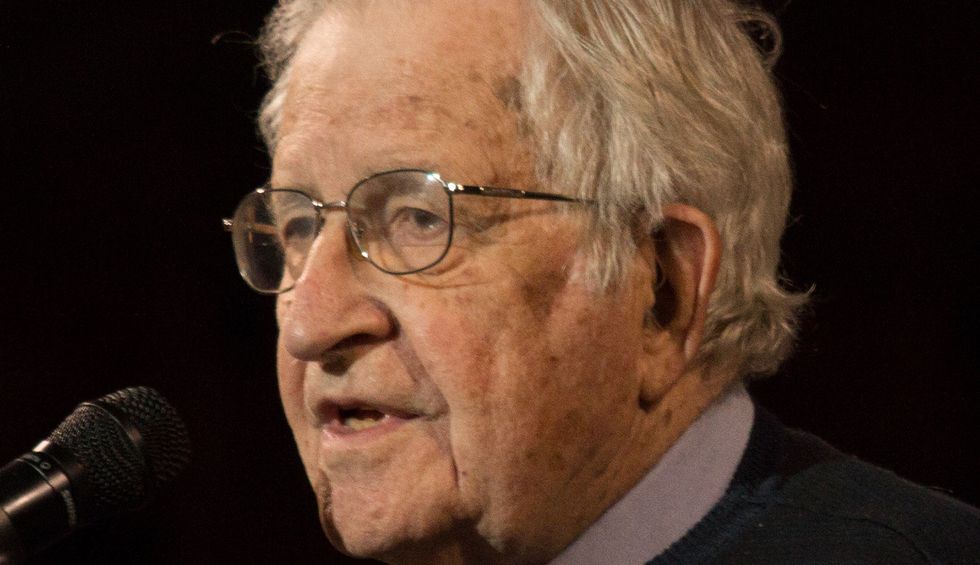 Is the United States being run by a madman? “What can you say about a person who, before speaking before an adoring crowd, raises his eyes to heaven and calls himself the chosen one?” says Noam Chomsky, responding to President Trump’s boast that he aced a mental acuity test.

AMY GOODMAN: This is Democracy Now!, The Quarantine Report. I’m Amy Goodman, with Nermeen Shaikh. We are spending the hour with Noam Chomsky, world-renowned political dissident, linguist, and author, laureate professor in the Department of Linguistics at the University of Arizona, Tucson, and Professor Emeritus at the Massachusetts Institute of Technology, where he taught for more than 50 years. Democracy Now!’s Nermeen Shaikh and I spoke to him Thursday.

AMY GOODMAN: Noam Chomsky, I wanted to play for you what President Trump said on Fox News about the cognitive test he recently took, saying it was difficult.

PRESIDENT DONALD TRUMP: I took a test. I said to the doctor, it was Dr. Ronny Jackson, I said “is there some kind of a test, an acuity test?” And he said, “There actually is,” and he named it, whatever it might be. And it was 30 or 35 questions. The first questions are very easy. The last questions are much more difficult, like a memory question. It’s like you’ll go “person, woman, man, camera, TV.” So they would say, “Could you repeat that?” So I said, “Yeah. So it’s person, woman, man, camera, TV.” “OK, that’s very good.” If you get it in order, you get extra points.

AMY GOODMAN: President Trump saying he aced this test for dementia. He keeps talking about acing this cognitive test, a test that is given to see if someone is suffering from dementia, some kind of cognitive difficulties. This isn’t an IQ test. He continually goes back to it, even when told, “You’re asking to identify an elephant. You are being asked to draw a clock, to count back from 100 by sevens.” This is a test to see if a person is becoming senile. Is the United States being run by a madman, Noam Chomsky?

NOAM CHOMSKY: As you say, the test is given for dementia, incipient dementia, a serious mental illness. But what can you say about a person who, before speaking before an adoring crowd, raises his eyes to heaven and calls himself the chosen one? What can you say about an administration where the secretary of state says, “Perhaps Trump has been sent by the good lord to save Israel from Iran”? The country is being run by madmen.

There is no parallels to this. In fact, you can see it in everything that is happening. You go back to late March or so, the United States was about the same as Europe in the number of COVID-19 cases and deaths. It was roughly the same. Take a look at the chart since. Europe has sharply declined. It is not over the problems, not doing as well as Asia or Oceania, but way down. The United States remains stable. You look at the medical journals, they point out that Trump’s malfeasance and incompetence, whatever, just lack of concern for the welfare of the population, has killed maybe 100,000 people. That’s a pretty significant slaughter.

And that is why he is flailing around wildly to find somebody to blame it on. That is why he is using the current opportunity to send quasi-military forces, more or less paramilitary, to set up violent confrontations with Democratic mayors and governors. And there’s no precedent for sending militarized forces to control a city in opposition—when there is total opposition on the part of the mayor, the governor, the senators, obviously the population. This is treating the country like occupied territory, with the totally clear purpose of trying to set up confrontations which will somehow save him from electoral defeat.

And if there is defeat, he may just refuse to leave the White House, as he intimated on Fox News the other day, in which case you really have to ask, what happens next? Does the military move in and remove him? Or what happens when—or militias start surrounding the White House? We don’t know. This is a situation which has never arisen in a functioning democracy apart from the fascist takeovers in Italy and Germany, some other countries, in the interwar period.

Trump is sometimes, even by experts in the topic, called moving toward fascism. I think, frankly, that gives him much too much credit. Fascism was a serious ideology. I think it’s well beyond his ken or concern. This is more like a minor dictator in a small country that is subjected to military coups over the years. There is no conception of introducing real fascist ideology. In fact, in some ways, we are almost the opposite of it. The fascist systems were based on the principle that the powerful state under the leadership of the ruling party and the maximal leader should basically control everything. They should run and control the society, including the business community. We are almost the opposite. It is the business community controlling the government. And any infringement on their power would lead to a kind of confrontation that is almost unimaginable.

So I don’t think it is fascism. It is essentially tin-pot dictatorship. And he is desperate, will do anything, almost anything imaginable to try to keep himself from being tossed out of the White House. How this will eventuate, we don’t know, but it is going to be a very difficult couple of months ahead.