'I am someone's daughter too': Ocasio-Cortez delivers powerful speech after sexist attack by Florida congressman 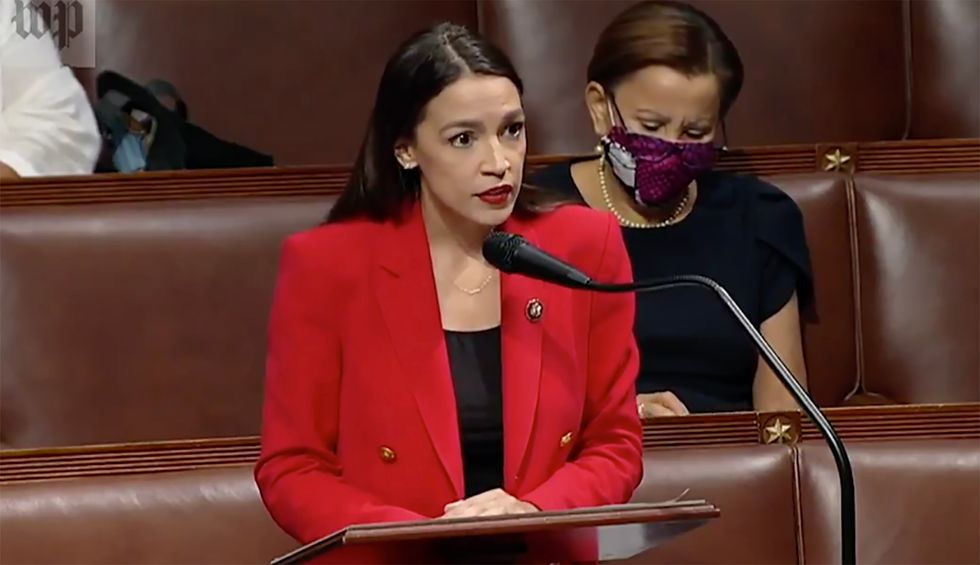 Rep. Alexandria Ocasio-Cortez (NY-14) took to the House floor on Wednesday morning to respond to the vulgar, sexist encounter she had with Rep. Ted Yoho (FL-03) and Rep. Roger Williams (TX-25) on Monday. Ocasio-Cortez was on her way to vote, walking up the steps of the U.S. Capitol when the pair of Republican congressmen angrily confronted her. According to AOC, Yoho was angrily wagging his finger in her face and as he walked away, a reporter from The Hill overheard him exclaim “Fucking bitch.”

The reporter’s account of the encounter sparked a firestorm and House Majority Leader Steny Hoyer and others demanded Yoho apologize for his remarks, which seemed to be in violation of the House Ethics rules. So the first order of business on Tuesday was Yoho issuing an apology on the House floor. Except it wasn’t an apology at all. He denied using the vulgar slur and then used the fact he has a wife and daughter to deflect from his poor behavior. While many media outlets nationwide ran with “Yoho apologizes” headlines, AOC rightly pointed out that he never apologized. He never said her name. He never took responsibility for his language. He apologized for “their misunderstanding”, claiming the reporter’s misunderstood his comment. And then he had the gall to say he would not apologize for “his passion” or for “loving his God.” Nobody asked him to apologize for his religion, they asked him to apologize for being a sexist, violent jerk. And while he didn’t raise his hand to strike her, a much larger man getting in your face, angrily yelling and wagging his finger in front of your face is very much a physical aggression.

With that, AOC stood on the floor to address the controversy in one of her most passionate speeches to-date. She said she intended to let the fury die down and she would move on, but then Yoho refused to take responsibility for his actions and it upset her he brought his own wife and daughter into the controversy, using them as a shield for his behavior. She noted that she is two years younger than Ted Yoho’s youngest daughter and that “she is someone’s daughter too.” She began to choke up a bit as she pondered how her own father, who is deceased, might react to seeing the hateful treatment she is frequently on the receiving of, from just using the subway, to working as a bartender and now in the United States House of Representatives. She said she could not let this go because “this is not new. It is something women face every single day. It is a cultural.

Enough of the recap, watch this deeply powerful speech. It will no doubt resonate with women worldwide.

To the female readers of this website, you know how this feels. There is not likely a woman alive who hasn’t been called a bitch or a fucking bitch, most likely starting before you even finished high school. (H/T The American Independent for the transcript)

REP. ALEXANDRIA OCASIO-CORTEZ (D-NY): About two days ago, I was walking up the steps of the Capitol, when Rep. Yoho suddenly turned a corner — and he was accompanied by Rep. Roger Williams — and accosted me on the steps right here in front of our nation's Capitol. I was minding my own business, walking up the steps, and Rep. Yoho put his finger in my face. He called me disgusting. He called me crazy. He called me out of my mind. And he called me dangerous. And then he took a few more steps, and after I had recognized his comments as rude, he walked away and said, "I'm rude? You're calling me rude?"

I took a few steps ahead, and I walked inside and cast my vote because my constituents send me here each and every day to fight for them and to make sure that they are able to keep a roof over their head, that they're able to feed their families, and that they're able to carry their lives with dignity.

I walked back out and there were reporters in the front of the Capitol, and in front of reporters, Rep. Yoho called me — and I quote — "a fucking bitch."

These were the words that Rep. Yoho levied against a congresswoman, a congresswoman that not only represents New York's 14th Congressional District but every congresswoman and every woman in this country. Because all of us have had to deal with this in some form, some way, some shape, at some point in our lives. And I want to be clear that Rep. Yoho's comments were not deeply hurtful or piercing to me. Because I have worked a working-class job. I have waited tables in restaurants. I have ridden the subway. I have walked the streets in New York City. And this kind of language is not new. I have encountered words uttered by Mr. Yoho and men uttering the same words as Mr. Yoho while I was being harassed in restaurants. I have tossed men out of bars that have used language like Mr. Yoho's. And I have encountered this type of harassment riding the subway in New York City.

This is not new. And that is the problem.

Mr. Yoho was not alone. He was walking shoulder to shoulder with Rep. Roger Williams. And that's when we start to see that this issue is not about one incident. It is cultural. It is a culture of lack of impunity, of accepting of violence and violent language against women, and an entire structure of power that supports that. Because not only have I been spoken to disrespectfully, particularly by members of the Republican Party and elected officials in the Republican Party — not just here but the president of the United States last year told me to go home, to another country, with the implication that I don't even belong in America.

The governor of Florida, Gov. DeSantis, before I even was sworn in, called me a "whatever that is."

Dehumanizing language is not new. And what we are seeing is that incidents like these are happening in a pattern. This is a pattern of an attitude towards women and dehumanization of others. So while I was not deeply hurt or offended by little comments that are made, when I was reflecting on this, I honestly thought that I was just going to pack it up and go home. It's just another day, right?

Which is why I'm rising today to raise this point of personal privilege.

And I do not need Rep. Yoho to apologize to me. Clearly, he does not want to. Clearly, when given the opportunity, he will not. And I will not stay up late at night waiting for an apology from a man who has no remorse over calling women and using abusive language towards women. But what I do have issue with is using women, our wives and daughters, as shields and excuses for poor behavior. Mr. Yoho mentioned that he has a wife and two daughters. I am two years younger than Mr. Yoho's youngest daughter. I am someone's daughter too. My father, thankfully, is not alive to see how Mr. Yoho treated his daughter. My mother got to see Mr. Yoho's disrespect on the floor of this House towards me on television. And I am here because I have to show my parents that I am their daughter and that they did not raise me to accept abuse from men.

Now, what I am here to say is that this harm that Mr. Yoho levied — tried to levy — against me was not just an incident directed at me, but when you do that to any woman, what Mr. Yoho did was give permission to other men to do that to his daughters. In using that language in front of the press, he gave permission to use that language against his wife, his daughters, women in his community, and I am here to stand up to say that is not acceptable.

I do not care what your views are. It does not matter how much I disagree or how much it incenses me or how much I feel that people are dehumanizing others. I will not do that myself. I will not allow people to change and create hatred in our hearts. And so what I believe is that having a daughter does not make a man decent. Having a wife does not make a decent man. Treating people with dignity and respect makes a decent man. And when a decent man messes up, as we all are bound to do, he tries his best and does apologize. Not to save face, not to win a vote. He apologizes genuinely to repair and acknowledge the harm done. So that we can all move on.

But once again I thank my colleagues for joining us today.