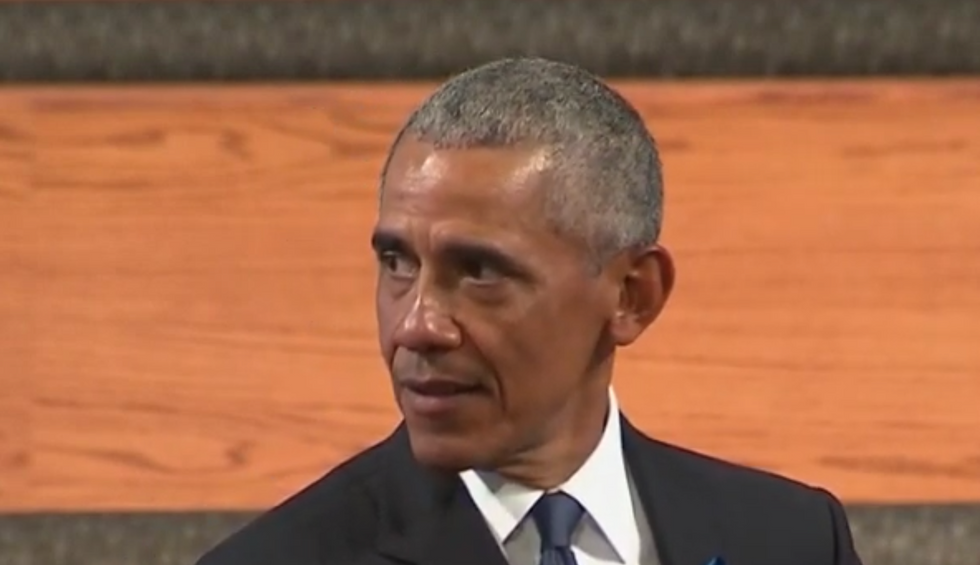 Former President Barack Obama delivered an impassioned, rousing, and at times blistering eulogy on Thursday at a memorial service for Rep. John Lewis. Instead of showing the usual reserve and hesitancy to criticize that has characterized most of his post-presidency, Obama took inspiration from the fallen civil rights hero and aimed his fury specifically at the myriad abuses of the Trump administration and the Republican Party on American freedoms and fair elections.

"George Wallace may be gone, but we can witness our federal government sending agents to use tear gas and batons against peaceful demonstrators," he said, drawing cheers and applause from the attendees. "We may no longer have to guess the number of jelly beans in a jar to cast a ballot, but even as we sit here, there are those in power doing their darndest to discourage people from voting, by closing polling locations and targeting minorities and students with restrictive ID laws, and attacking our voting rights with surgical precision. Even undermining the postal service in the run-up to an election that's going to be dependent on mail-in ballots so people don't get sick!"

For those who might criticize such direct denunciations of the GOP and the president's actions at a memorial service, Obama had a brilliant prepared response.

He explained: "Now I know this is a celebration of John's life. Ther are some who might say we shouldn't dwell on such things. But that's why I'm talking about it. John Lewis devoted his time on this Earth fighting the very attacks on democracy and what's best in America that we're seeing circulating right now."

He also denounced the Supreme Court's decision that gutted the Voting Rights Act, a law that he noted was signed by two previous Republican presidents. And he called out those politicians who gave lip-service to Lewis after his death but have done nothing to support the causes for which he lived.

"If politicians want to honor John — and I'm so grateful for the legacy and work of all the congressional leaders who are here — but there's a better way than a statement calling him a hero. You want to honor John? Let's honor him but revitalizing the law that he was willing to die for," Obama said.

Perhaps most strikingly, Obama endorsed bold actions to restore voting rights, including — if necessary — abolishing the Senate filibuster, which he called a "Jim Crow relic."

"Like John, we've got to fight even harder for the most powerful tool that we have, which is the right to vote. The Voting Rights Act is one of the crowning achievements of our democracy. That's why John crossed that bridge. It's why he spilled his blood," he said. He concluded: "What a gift John Lewis was. We are all so lucky to have had him walk with us for a while, and show us the way. God bless you all. God bless America. God bless this gentle soul who pulled it closer to its promise. Thank you very much."