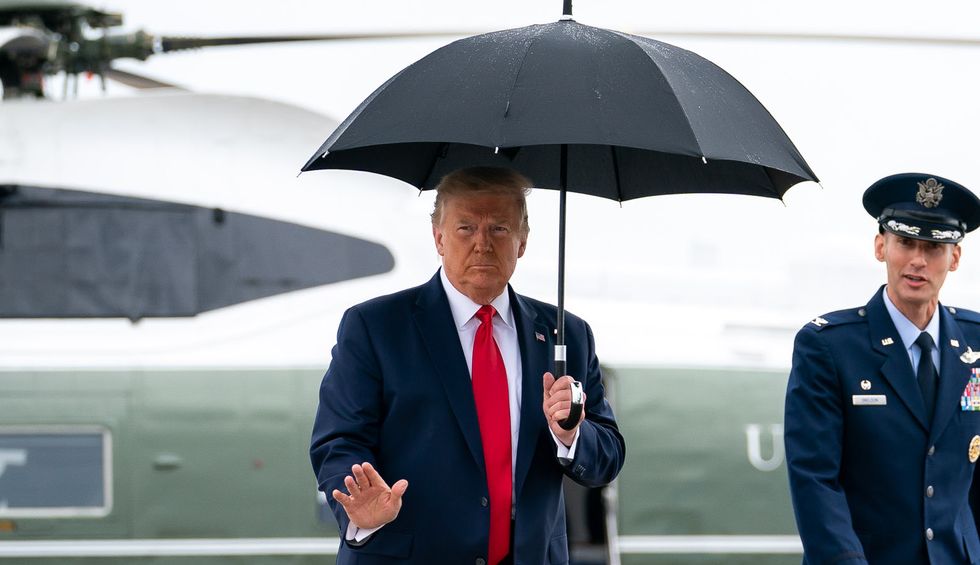 President Donald J. Trump is escorted by Col. Stephen Snelson, Commander of the 89th Airlift Wing, as he walks from Marine One at Joint Base Andrews, Md., Saturday, June 20, 2020, to Air Force One to begin his trip to Tulsa, Okla. (Official White House Photo by Tia Dufour)
Cody Fenwick
June 25, 2020

On Tuesday, New York and Kentucky held major primary elections in their states. What are the results? We have some preliminary tallies and winners in some of the races, but for the final results — well, we're going to have to wait a while.

The reasons for the delay are various, as the New York Times explained: "Record numbers of absentee ballots that are more labor intensive to count; regulations that delay the counting process; fears about in-person voting because of the virus; and legal maneuvering around how late people can vote, including allowing ballots to be postmarked all the way up to Election Day."

It's a frustration for many political junkies and those on campaigns, to be sure. But the reality is that we can wait for the results to be counted.

The real danger is that these slow results are a warning sign for November. With high-stakes contests underway for control of the White House and the Senate, the country will be eager to know who won as soon as possible.

But the answer to key questions — most notably, the winner of the presidential election — may still elude us when we wake up on Wednesday, Nov. 4. The factors causing a delay in vote counting will likely still be with us. In fact, they could be even worse. The virus, currently resurgent, may be in the middle of a full-blown second wave — which could be even worse than the first. The number of mail-in ballot requests is likely to explode, especially if the pandemic is more severe, and turnout could easily surpass states' expectations. Republicans are likely to try their usual slate of voter suppression tricks, adding to the confusion, delay, and legal questions.

We've seen another red flag about the election in recent days coming straight from President Donald Trump's Twitter feed. Clearly shaken and uncertain about how to campaign against Joe Biden, the president has begun laying the groundwork for challenging the legitimacy of November's result:

RIGGED 2020 ELECTION: MILLIONS OF MAIL-IN BALLOTS WILL BE PRINTED BY FOREIGN COUNTRIES, AND OTHERS. IT WILL BE THE SCANDAL OF OUR TIMES!
— Donald J. Trump (@Donald J. Trump) 1592824617

TRUMP: "This will be, in my opinion, the most corrupt election in the history of our country. And we cannot let thi… https://t.co/UgMc5BlEqZ
— Aaron Rupar (@Aaron Rupar) 1592955508

It's extremely dangerous for the president to be casting doubt on the election before it has even taken place. And it also seems like a clear sign of what's to come: If Trump loses, he intends to contest the result.

And this fact, combined with the likelihood that full results are almost certain to be delayed — perhaps for a week a more — indicates that there are at least two major ways election night could turn into a disaster.

First, the initial results could be inconclusive. The vote counts we get on Tuesday night, and early Wednesday morning, may be impossible to interpret without the outstanding mail-in and absentee ballots. It may appear that Trump or Biden has the lead in a certain number of key swing states, but the true result may be impossible to determine until the full results are in.

Trump could use this time to declare himself the victor, perhaps seizing on the preliminary counts that don't include all the mail-in ballots. Since he has already primed his supporters to distrust mail-in voting, he might claim that any additional ballots that alter the result of the preliminary count are illegitimate, fake, or fraudulent.

Alternatively, it's possible that it may appear Tuesday night that Biden has won a decisive victory, even without counting all the ballots. Under certain circumstances, it may be clear that Trump wouldn't be able to make up the necessary gap with any plausible configuration of mail-in voting results — especially if Biden's electoral college victory is overwhelming.

But under this scenario, Trump might pull the opposite play — demanding that any early declaration of the winner is fraudulent until every vote is counted. If he's still the loser when all the votes are counted, he may point to the early declaration of Biden's victory as evidence that the race was rigged from the start.

In either of these scenarios, Trump may take to the courts to contest official results. He may demand recounts. How that plays out is impossible to predict, but it would undoubtedly mire Americans in uncertainty and heighten partisan tensions in the country. It's not hard to imagine how the situation could spiral out of control.

There is a solution to these problems, but it needs to start now. The media needs to start informing people that it's very likely we won't have full election results on Tuesday night.

CNN's election analyst Harry Enten is already on board:

But it's crucial for all the major TV networks to get on board, including, if possible, Fox News. They need to tell viewers that the presidency and other important races may not be decided on Nov. 3 and that this won't be a sign of anything nefarious. It will simply be a sign that election workers are taking their time and doing a thorough job.

Outlets such as the Associated Press may even have to refrain from announcing a victory for one candidate too soon based on mathematical projections to avoid the appearance that the result was pre-determined or illegitimate. We need to start having the conversation now about what is appropriate and what we can expect so that we're not blindsided by chaos in November.