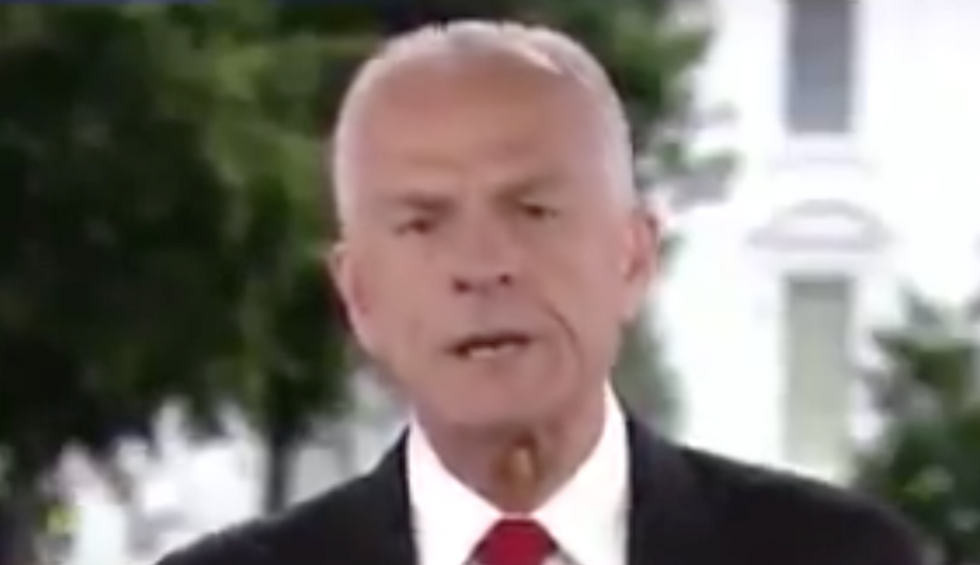 Peter Navarro, one of the top White House officials overseeing trade policy, said on Monday that the elusive deal with China that has so transfixed President Donald Trump has finally collapsed.

He also pushed a warped and inflammatory version of the history of the coronavirus, attributing a malevolent intent behind the pandemic that is in no way supported by the evidence.

Trump "obviously really wanted to hang on to this trade deal as much as possible," MacCallum said. "And he wanted them to make good on the promises because there had been progress made on that trade deal. But given everything that's happened, and all the things you just listed, is that over?"

"It's over," Navarro said, conceding not only a major failure on the president's part but also the collapse of what was once envisioned to be a key pillar of his re-election campaign. Trump clearly wanted to run on the China trade deal, and he has previously promised that it would supercharge the U.S. economy — despite the lack of any substantive reason to believe these boasts. Former National Security Adviser John Bolton recently alleged in his new book that Trump explicitly asked China to agree to make purchases as part of the deal that could help bolster his re-election.

Clearly, though, the time when it was plausible that the election could be decided on the PR about an international deal and the minor economic benefits that might accrue from to select portions of the population because of it has passed. The coronavirus, the recession, and perhaps the protests are likely to be the key issues on voters' minds in November, and they all greatly outpace the potential trade deal in significance. So this may not have felt like much of a concession for Navarro to admit to.

In fact, Navarro proceeded to explain what he thought would be the focus of the election: "jobs, China, and law and order."

He'd rather say "China," of course, than "the pandemic," because he wants to place the blame for the pandemic squarely on a foreign country. But it's hard to believe this message will resonate strongly, given how widely documented Trump's own lies, deceptions, and bungling over the virus are. And while team Trump thinks making China the enemy will benefit the president, this is far from certain — after all, the current crisis emerged on his watch and while he was in negotiations with China. Even if a voter saw China as a devious enemy, what has Trump done to show he can keep the U.S. safe?

To further his anti-China message, Navarro twisted the history of the virus, suggesting that the Chinese government knew of the disease in mid-November — though little credible evidence suggests such a timeline. He also falsely claimed that we only started to hear about the virus after Jan. 15, when in reality American officials discussed it with Chinese officials on Jan. 2. And while China did appear to downplay the threat and go after dissenters early on, Trump downplayed the dangers for much longer and after it was much clearer how devastating the virus could be.

Navarro also claimed that China "sent hundreds of thousands of people to this country to spread that virus." This is an outrageously dangerous lie to spread. It's not only without evidence; it's completely nonsensical. Such a conspiracy theory would seem like a stretch even on InfoWars. While some number of people from China undoubtedly carried the virus to the United States unintentionally, there's no way hundreds of thousands did or that they did it intentionally. Some reports have indicated that Europe may have been the source of many of the original infections on U.S. soil. For a prominent White House adviser to spread this kind of inflammatory misinformation — and to not even be challenged by a TV host — would be truly shocking if we weren't already used to such gross misconduct and lies from this administration.

In fact, MacCallum even seemed to feed into Navarro's paranoid rantings, ludicrously comparing the situation to Japan's attack on Pearl Harbor at the start of World War II: