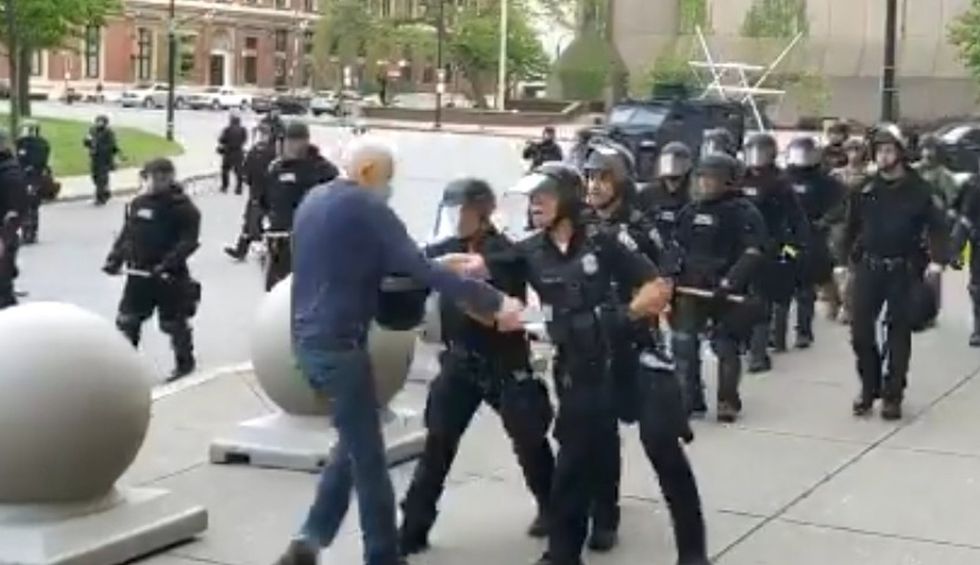 Martin Gugino, the 75-year-old peace activist whose skull was fractured when Buffalo police officers shoved him to the ground earlier this month during a Black Lives Matter protest, is still hospitalized Tuesday and remains unable to walk, according to his lawyer.

Attorney Kelly Zarcone updated media outlets of Gugino's condition following the brain injury and fractured skull he suffered after the officers pushed him, causing him to fall and hit his head on the concrete.

"I am not at liberty to elaborate at this time other than to confirm that his skull was fractured," Zarcone said in a statement to CNN. "While he is not able to walk yet, we were able to have a short conversation before he became too tired. He is appreciative of all of the concern about him but he is still focused on the issues rather than himself."

Gugino has continued to deflect attention from himself during his hospitalization and urged focus instead of issues on social injustices.

The veteran activist captured the attention of President Donald Trump, who suggested Gugino was "an ANTIFA provocateur" who "fell harder than was pushed."

But friends and fellow activists have described Gugino as a supporter of the Catholic Worker movement with a long commitment to the causes of peace and justice.

"The man does not have a violent tendency or has never taken a violent action in his life," Matt Daloisio, a fellow activist and close friend, told the Guardian last week. "He is one of the sweetest, gentlest people I know."

PUSH Buffalo, one of the progressive groups Gugino worked with, described him as "simply a man that shows up to stand for peace and justice."

In a June 6 statement on the incident, the Western New York Peace Center, of which Gugino is also a member, drew attention to harms caused by militarization of police forces and outlined paths to reform.

"We also hope that restorative justice practices will be exercised: including Martin, the police officers involved, and the community in establishing what happened, what was the damage done, and how the damage can be repaired," the group said. "The issue is obviously much bigger than this single incident."

The peace group also directed supporters of Gugino to a GoFundMe page set up to help cover medical bills and legal fees.