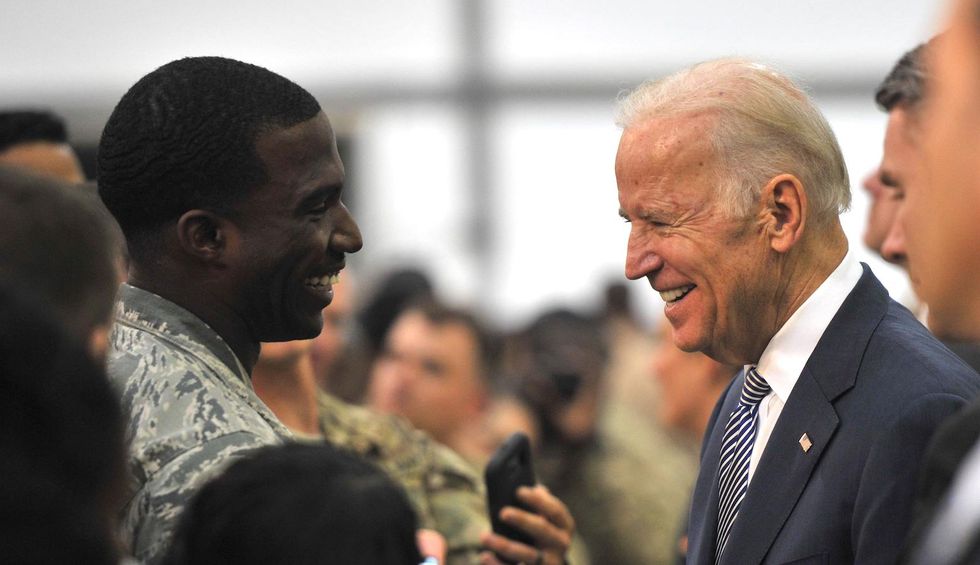 Vice President Joe Biden shakes hands with Staff Sgt. Demetric at an undisclosed location in Southwest Asia, March 7, 2016. Biden and his wife, Dr. Jill Biden, greeted troops and posed for photos with U.S. and coalition members before departing the base for the next part of their Middle East tour. (U.S. Air Force photo/Staff Sgt. Kentavist P. Brackin)
Joshua Holland
and
Joshua Holland
June 24, 2020

The worst political journalism results from a reporter parachuting into a community he or she isn't familiar with, interviewing a handful of colorful characters and spinning what they say into a counter-intuitive "report" designed to attract lots of clicks. This kind of "reporting" requires the journalist to approach their subject as if they just descended from an alien ship and have no prior knowledge of American politics. It privileges anecdotes over data, and ultimately makes readers less knowledgeable about what's going on.

In a "letter to Washington" published on Wenesday, Politico's Chief Political Correspondent, Tim Alberta, provides a master-class on this genre. Alberta visited a  cookout in an affluent suburb of Detroit, where he was "dazed" to find a predominantly African-American crowd "who spent Sunday afternoons sipping Mimosas and playing spades." Patronizingly, he writes that "these were Black people who were going to vote." (The title of the piece is ‘I’m Tired of Being the Help,’ which is less offensive than the right-wing rhetoric about African -American voters being stuck on a "Democrat plantation," but not by much.)

After describing the spread--"eggs, chicken wings, potatoes, shrimp and grits, a fine assortment of cookies and cocktails"--Alberta spoke to a number of Black attendees who conveniently gave him just the counterintuitive storyline that he sought, and one that's guaranteed to cause some hand-wringing among Democrats.

Fifty-five year-old Tonya Griffith told Alberta that she isn't enthusiastic about voting this fall and, "truth be told, she doesn’t know anyone who is." Griffith says the African-American community may be fired up over the Movement for Black Lives now, but she doesn't see that energy lasting.

“I bet our numbers come up, because nobody liked Hillary Clinton, but I don’t think they come up much. And I know they don’t get back to those record numbers from Obama,” Griffith said of Black voter turnout. “We look at Joe Biden and see more of the same. It’s about the era he came up. It’s about his identity—he’s a rich, old white man. What are his credentials to us, other than Obama picking him?

Oddly, every person Alberta spoke to at the cookout shared this sentiment, and all of them predicted Trump would win a second term. “I’m going to vote," said 53-year-old Ursura Moore. "But Trump’s getting back in office either way.” Alberta writes that this was a "recurring theme of my conversations: a fatalism about defeating Trump this fall. Not a single person I spoke with at the cookout told me they believed Biden would win." I say that's odd because as of this writing, Biden leads Trump by double-digits nationally in RealClearPolitics' average, by 6 points in Florida and an average of 6.2 points in Wisconsin, Michigan and Pennsylvania. Given the numbers, one would think that someone at that cookout would expect him to win.

It's a repetitive piece, running over 4,000 words in length and all of it with the same theme. "None of what I will relay to you in this letter should be considered predictive," Alberta writes at the top of the piece to cover his ass. "But make no mistake: If what I heard Sunday in southeast Michigan is at all representative of the Black community across America, Democrats should be disturbed and afraid. Not because they risk losing an election, but because they risk losing the loyalty of an entire class of voters."

Again, this kind of reportage must never cite any public opinion surveys, and Alberta's unfortunately landed on the same day as a New York Times/Siena College poll found that a whopping 83 percent of African-Americans say they are "almost certain" (50 percent) or "very likely" (33 percent) to vote this fall. And only 5 percent of them support Donald Trump, three points below the 8 percent of the Black vote that he won in 2016, according to the exit polls.

It is also striking that Politico's chief political correspondent appears to be unaware of the power of negative partisanship in American elections. Many Democrats, regardless of race, may not be enthusiastic about Joe Biden, but they're fearful of a second Trump term and virtually every indicator over the past three years suggests they're going to enthusiastically vote against him. (A Morning Consult poll released early last month found that voters who dislike both candidates breaking for Biden 46-14 in a head-to-head matchup.)

And while Tonya Griffith has every right to her opinion that African-American turnout won't be much higher for Biden than it was for Clinton, the off-year elections since Trump took office tell a different story. Fifty-one percent of Black voters turned out for the 2018 midterms, according to University of Florida political scientist Michael P. McDonald. That was an all-time high in McDonald's data set, which goes back to 1986. To put that number into perspective, it was ten percentage points higher than Black turnout for the 2010 midterms and a whopping 15-point improvement over 2014.

There aren't good nationwide turnout data for the Democrats' off-year victories in the 2017 and 2019 elections, but high turnout among African-Americans was widely seen as propelling Ralph Northam to a win in Virginia's gubernatorial election in 2017 and John Bel Edwards' victory in a closely contested race for Louisiana governor in 2019. And if one wants to consider anecdotal data, there are those images of African-Americans braving long lines and a raging pandemic to cast primary ballots in a bunch of states in recent months.

None of this is to say that many African-American voters don't feel taken for granted by Democrats, just as white Evangelicals often feel they they're exploited by Republicans without getting much in return. That's the nature of our broad coalitions and first-past-the-post electoral system. Both parties do deliver to their most loyal constituencies but members of those groups often feel that they should be getting more given their importance to their respective parties.

But as Perry Bacon wrote last year, Black voters tend to be pragmatic in their choices and often vote defensively in large part because "they have more to lose than white voters, making them more risk-averse." The idea that after voting in large numbers in three off-year elections in which Trump wasn't directly on the ballot only to stay home against the most explicitly racist president since Woodrow Wilson, or perhaps Andrew Jackson, just isn't plausible. Which may explain why every person Tim Alberta spoke to at that cookout said that they would personally be voting for Joe Biden in November.

Maybe that should have been his take-away.