How many people will be killed as a result of Trump's unhinged re-election campaign? 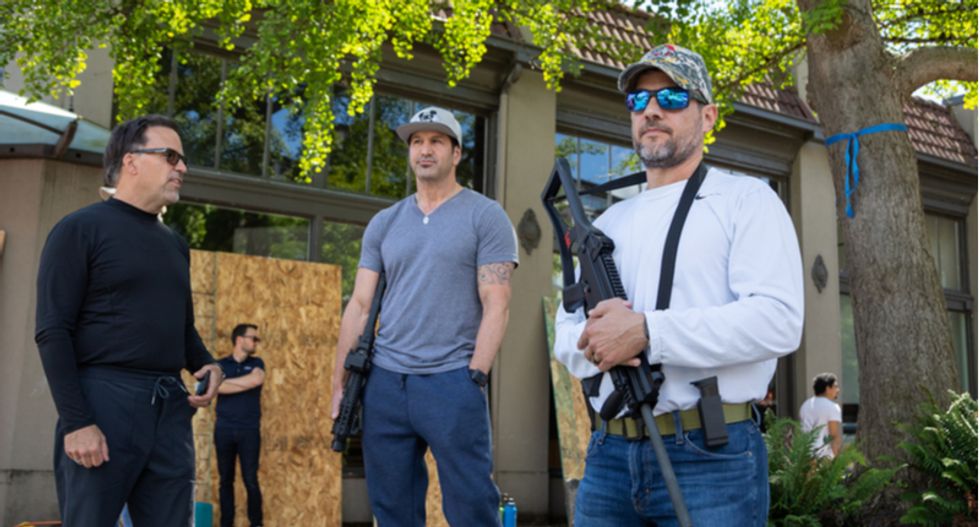 The Economist's predictive model currently gives Donald Trump a 2 percent likelihood of winning more votes than Joe Biden in November, but a one-in-eight chance of winning a second term via the Electoral College. With four months to go before voters cast their ballots, his campaign has so far failed to coalesce around a theme. So far they have flailed from "Keep America Great" to "Make America Great Again, Again" to promising a "Transition into Greatness." According to Politico, Trump's "team built a comprehensive 2020 reelection plan around winning a slice of black and Hispanic voters," which is not going well.

The contours of the right's campaign to retain its grip on the White House are not difficult to discern. Trump is setting up a claim of massive fraud via mail-in balloting. Attorney General Bill Barr hinted over the weekend that John Durham's investigation into the Russia probe will yield fruits this summer. And Senate Republicans are pursuing their investigation into the conspiracy theories surrounding Hunter Biden's work in Ukraine.

But the primary thrust of the campaign will be chaos. The campaign, the conservative press and sundry social media trolls are all relentlessly pushing a message to white conservatives that American cities are in flames as violent leftists riot, their history is being erased, cops are being targeted by fast-food employees and in the end, these monsters will be coming for them and their families. The New York Times reports that thanks to social media amplification, "residents in at least 41 U.S. cities and towns became alarmed by rumors that the loose collective of anti-fascist activists known as antifa was headed to their area... In each case, it was for an enemy that never appeared."

Obviously, none of this is new. Trump launched his 2016 campaign blathering about Mexican rapists, gave a bizarre inaugural address with the theme of stopping "American carnage" and insisted that he's the "law and order president" before having protesters brutally cleared from Lafayette Square so he could take a photo op with an upside-down bible outside St. John's Cathedral.

What is new is the context. We've lost over 120,000 people to Covid-19 and we have the highest levels of unemployment since the Great Depression. Millions of Americans have been cooped up in their homes with minimal human contact for months. And above all, these sustained protests for Black Lives and renewed efforts to rid our public spaces of monuments to white supremacy pose the greatest threat to a segment of white America's sense of their position in this society since the election of a black man with a funny name to the White House. Fear and stress dominate and we're about to enter a long, hot summer.

We have gotten a taste of what's in store during the months ahead. Police say a far-right "boogaloo boi" was responsible for killing two police officers and wounding five others in two separate attacks in California. Three of his fellow extremists who were "armed with Molotov cocktails to target police" attempted to cause riots in Las Vegas. A right-wing militia member shot a protester attempting to remove a statue of a brutal Conquistador in Albuquerque; an armed, off-duty airport cop was arrested for taking a sniper's position above a statue of Robert E. Lee in Virginia. David Neiwert reports that Proud Boys and other extremists are hanging around the Seattle "Capitol Hill Organized Protest," beating people up on side streets when they can. Two weeks ago, the brother of a Seattle police employee drove his car into a crowd of protesters and then shot one of them who tried to block his path. That wasn't an isolated incident--as of a week ago, at least 19 people had driven vehicles into protesters, according to The Washington Post, including a white supremacist who fatally struck a black protester in California. (And while police say multiple black men found hanging in public spaces were victims of suicide, the widespread skepticism about those speedy conclusions is understandable.)

There is a reticence in the mainstream press to connect these assaults to the rhetoric coming from the White House and the conservative media, but while most people will shrug off their hyperbole, it only takes a few unstable and heavily armed people to wreak havoc.  Less than two years ago, "Magabomber" Cesar Sayoc attempted a murder spree inspired by Trump's many conspiracy theories and several acts of murder and terror have been connected to the QAnon craziness.

The reprise of Trump's American carnage campaign is bad politics. While the data suggest that James Comey's 11th-hour announcement that the FBI was reopening its investigation into Hillary Clinton's emails was responsible for Trump's narrow 2016 victory, his take-away was that the demagoguery worked. He tried to reprise it by fear mongering over MS-13 and an invading caravan of refugees in 2018, only to see his party handed its biggest midterm defeat in history.

The problem is that it's the only play in his playbook, he's being beaten badly at this point and neither he nor his movement cares about whether people get killed as a result of their unhinged rhetoric.