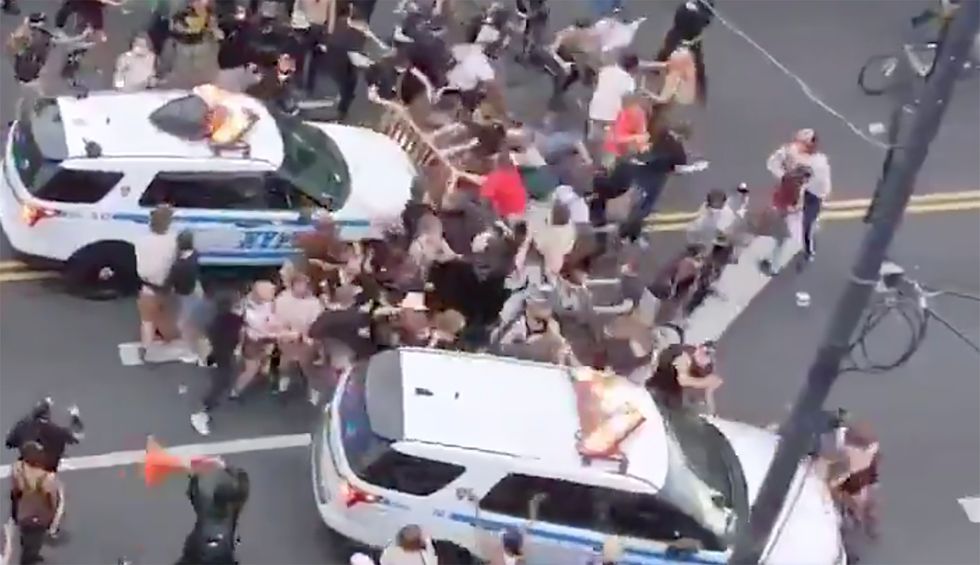 Image via Screengrab.
Jon Queally
and
Common Dreams
May 31, 2020

National Guard and local officers firing paint gun rounds at people standing on their own front porch in Minneapolis, Minnesota.

These were just some of the outrageous and violent scenes captured on video Saturday night amid demonstrations and uprisings in cities across the U.S. in protest of the killing of George Floyd in Minneapolis last week and the long history of police violence and social neglect in the country.

Here's what happened in Brooklyn:

This is what it looked liked when people standing on their front porch in a quiet neighborhood in Minneapolis when the National Guard marched down the street telling everyone to "Get in you house, now!" before ordering "Light up em" and opening fire with paint pellets:

This is what it looks like when police officers push down an elderly man in Salt Lake City:

This was the scene Columbia which left a commentator to declare "we are living in a police state":

In a widely shared commentary on Friday night, philosopher and social justice activist Dr. Cornel West argued that what is being witnessed right now in the U.S. is a "perfect storm" of discontent that blends the fresh outrage of Floyd's killing—and the similar killings of others by police—with the underlying injustice of an American capitalist system that cannot fulfil the human needs of its people and that is soaked in racism and inequality.

"When you talk about the masses of black people—the precious poor and working-class black people, brown, red, yellow, whatever color—they're the ones left out and they feel so thoroughly powerless, helpless, hopeless—then you get rebellion," West said.

Worth repeating that all of the police violence you see happening right now has been happening for a long time befo… https://t.co/ygDXiUnrJ2
— Clint Smith (@Clint Smith)1590929190.0

Rep. Alexandria Ocasio-Cortez in a viral video post on Saturday afternoon said that anyone calling an end to the so-called "unrest" sweeping the nation in the wake of Floyd's death is being nothing but hyppocritical and empty if they are not pairing that demand with calls to reform that systems that fuel such anger and despair.

In response to the specific of police violence displayed Saturday in Brooklyn when the police vehicles tried to mow down protesters, Ocasio-Cortez rejected the argument put forth by New York City Mayor Bill DeBlasio and others that such use of force was justified.

"NO ONE gets to slam an SUV through a crowd of human beings," she tweeted. "Running SUVs in crowds of people should never, ever be normalized. No matter who does it, no matter why."