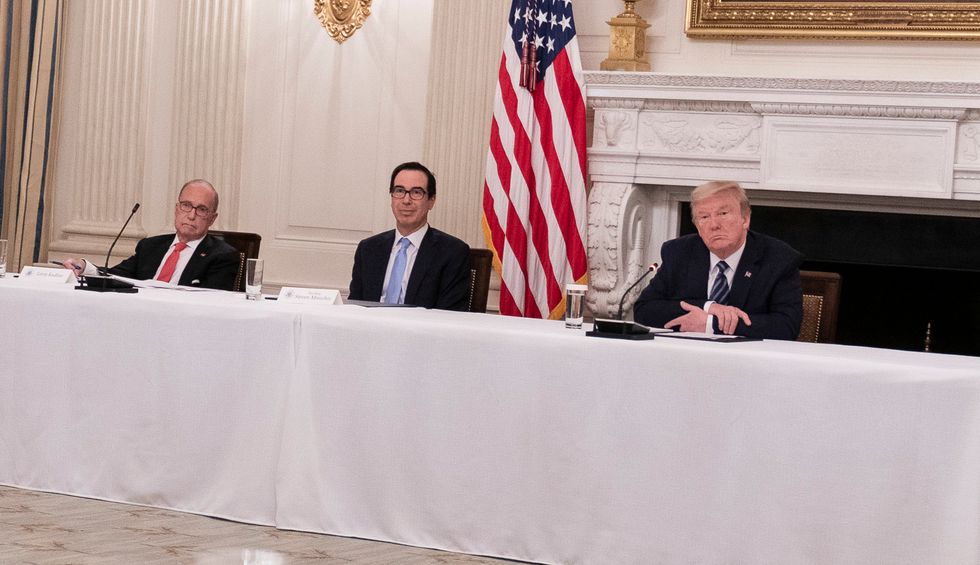 President Donald J. Trump listens to remarks during a meeting with Republican members of Congress Friday, May 8, 2020, in the State Dining Room of the White House. (Official White House Photo by Shealah Craighead)
Amanda Marcotte
and
Salon
May 11, 2020 News & Politics

Donald Trump thinks he can trick American voters into believing it's a good thing that one in six workers is out of a job. That's according to Nancy Cook at Politico, who reports that the mood in the White House was one of jubilation at hearing that the unemployment rate had soared to 14.7% — the highest since the Great Depression. That mood reflected "happiness that the figure wasn't as high as it could have been," Cook writes.

This allows Trump to use a strategy he often rolls out to trick the public into seeing his failures as a win: "Throwing out a huge number — like a future 25 percent unemployment rate, or 2 million deaths from the coronavirus — can, in turn, make lower figures seem like a relief."

It's a trick that Trump no doubt developed during his notorious business career, when he often tried to trick investors and banks into backing one failing venture after another by using trickery or outright lying, at least until the whole thing collapsed and he skated away, his personal assets intact, while the business went bankrupt.

Trump is trying to handle the American economy much the same way he handled his many failed business ventures: By lying about the numbers to make things seem better than they are, while moving money around with accounting tricks in hopes of fooling investors — or voters, in this case — into sticking around just a little longer, buying Trump time to figure out how he can escape personal consequences when the whole thing inevitably collapses.

In Trump's business, that was a matter of driving his companies into bankruptcy while minimizing his personal losses. When it comes to the American economy, Trump plans to bamboozle the voters into thinking things are better, just long enough to get re-elected in November. After that, no doubt, he could care less if the entire economy completely collapses.

Trump has decided his path to re-election is to present himself as the savior of the American economy, fighting against the evil progressives who overreacted to the coronavirus pandemic with draconian economic lockdowns. But no one should be mistaken: This is a lie, like almost everything Trump says.

In reality, Trump isn't the economy's savior at all. He's the main reason the economic devastation in this country is so bad in the first place. His current actions are only likely to make things worse, especially in the long run.

Trump may want to blame the current economic devastation on state governors, on China or on public health officials, but really, the blame lays largely with him. As Tim Dickinson writes in Rolling Stone, the lengthy stay-at-home orders are a direct result of Trump's refusal to take the virus seriously and implement mitigation measures before things spiraled out of control.

That failure was twofold. First, the White House advised Americans, back in February, not to change anything about their daily lives. If we had all adopted social distancing then, there's a strong chance that the viral spread could have been checked, preventing the more extensive stay-at-home orders that are currently laying waste to the retail sector and threatening the long-term survival of many businesses. But Trump, forever a short-term thinker, was incapable of adopting shutdown policies that might have avoided far longer and more stringent stay-at-home orders down the road. He bought himself a few weeks in February, but the price we're paying is the loss of April and May — and probably many months into the future.

Second, and more important, the administration didn't let the public have the coronavirus tests needed to safely reopen the economy. As Dickinson writes:

Blind to the virus's penetration and unable to target mitigation where it was needed, the administration and state governors had to resort to the blunt instrument of shuttering the economy, says Dr. Ashish Jha, director of the Harvard Global Health Institute. And the lack of testing kept us in limbo. "Our economy is shut down because we still do not have adequate testing," Jha says. "We have been woefully behind from the beginning of this pandemic."

Trump could have saved the economy, but he didn't, due to his laziness and short-sightedness, not to mention his misplaced confidence that he can BS his way through any situation. That 15% unemployment figure is hardly a victory — it's a sign of Trump's utter failures as a leader.

Nor can the administration claim ignorance. The Trump administration knows that adequate testing can prevent the need for draconian quarantines. Top administration officials — including Vice President Mike Pence, HHS Secretary Alex Azar and Surgeon General Jerome Adams — are not going into quarantine, despite exposure to the virus. They get to move about freely because they have access to regular testing, in some cases on a daily basis. But the rest of the country, thanks to Trump's negligence, is deprived of the testing that we need in order to be safe, so we're stuck at home.

All of this is likely to get worse. Trump continues to be short-sighted and largely focused on lying his way through this crisis, and has successfully pressured large parts of the country to "reopen" without remotely adequate precautions or testing. So it's quite likely we'll have another round of what happened in the late winter and early spring: The virus starts to spread rapidly, forcing more shutdowns and layoffs, drawing out the economic devastation far longer than would have been necessary under a more rational plan.

Trump isn't interested in an actual economic recovery. He intends to use accounting tricks and lies to create the illusion of a healthy economy just long enough to drag him across the finish line in November. That's evident in the White House proposal to raid Social Security for money to stimulate consumer spending in the here and now. As the Washington Post reported, "The proposal calls for giving Americans $10,000 upfront in exchange for curbing their federal retirement benefits, such as Social Security."

This is tantamount to sacrificing the long-term economic health of the nation in order to inject just enough cash into the economy to get Trump to November, at which point he'll almost certainly dump the American economy, just like he dumped every other business venture once it got too hard. Make no mistake, if a bunch of people find their retirement money drying up years or decades from now because of this cockamamie scheme, that will damage the economy big time. Trump, of course, does not care about the economic future of anyone but himself. He cares about getting to an Electoral College victory on Nov. 3, after which he can quit even pretending to care.

There are other sources of cash the U.S. government could tap that wouldn't strip money from the retirement funds of ordinary Americans. For instance, the government could borrow trillions of dollars at the near-zero interest rate currently offered by the Federal Reserve and, when the crisis is over, pay it back by repealing the multi-trillion-dollar tax cut that Trump gave the wealthiest Americans early in his presidency. Indeed, that move would likely bolster the nation's economic health in the long run, by getting more money out of the hands of the wealthy few and pushing it out into the larger economy.

Trump doesn't actually want a healthy economy, any more than he wants Americans to have healthy bodies. He wants to create the illusion of both, just long enough so that voters — like the suckers who invested in Trump's businesses only to see their money go up in smoke — re-up him for another term. Then he can keep on grifting and dodging legal trouble for his myriad crimes, which are his only important goals, while the rest of us watch thousands of people die and the economy fall apart around us.