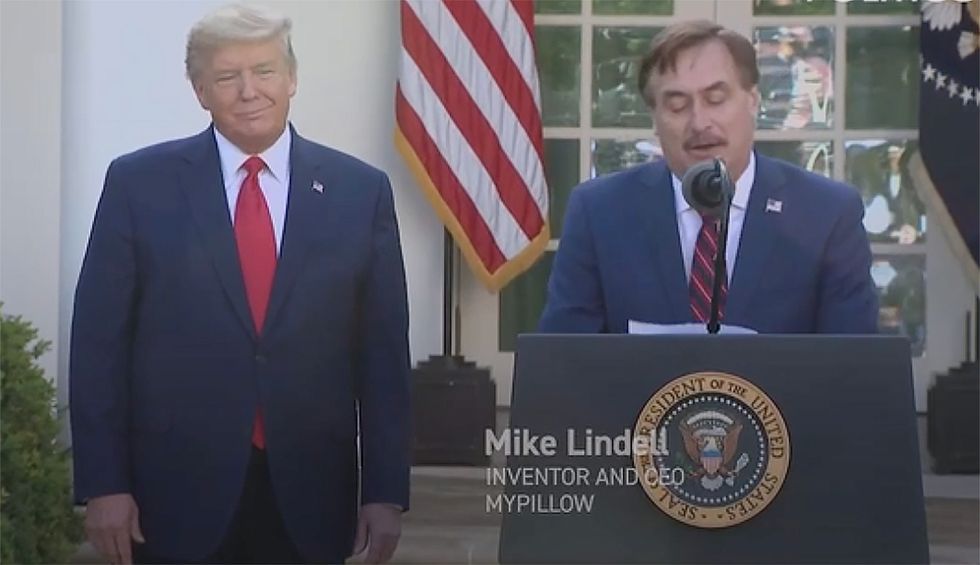 Image via Screengrab.
Roger Sollenberger
and
Salon
May 07, 2020 News & Politics

Mike Lindell, the founder of the MyPillow Company, has made good on his Rose Garden promise to produce and distribute medical masks to healthcare facilities around the country, a spokeswoman told Salon.

But in what would appear to be a previously-unannounced dimension to the operation, Lindell is also apparently "sourcing" masks, the spokeswoman said.

The CEO has allegedly converted more than 75% of his company's pillow production capacity since he first announced the program in late March on national TV during a presidential Rose Garden pandemic response briefing at the request of President Donald Trump.

During that address, Lindell, a former drug addict turned born-again Christian who has donated more than $200,000 to Trump's election efforts, went off-script, proclaiming to the nation that Trump had been "chosen by God."

"God gave us grace on Nov. 8, 2016, to change the course we were on," Lindell said, a reference to Trump's election. "Taken out of our schools and lives, a nation had turned its back on God."

In a later interview with the Epoch Times, Lindell explained how he ramped up the production process, calling MyPillow's serendipitous fitness for the job a "blessing."

"We had to make sure we had the right fabric," he said. "It was a blessing. The MyPillow fabric was perfect for it. We just had to not do two processes of printing. So we had to do a different process, but not a big switch. Had to get the right elastic."

However, Lindell's production facilities were not, and according to his spokeswoman, are still not equipped to make masks that meet FDA standards, such as the high-demand N95 respirators. That, she said, is the reason Lindell began to look elsewhere.

She did not know how those facilities use the MyPillow brand cloth masks, which do not have FDA approval, though healthcare providers have purchased them.

Lindell claims to have made good on his stated goal of 50,000 masks a day, but some details remain unclear.

First, this is not a charity effort: Lindell is selling those 50,000 daily masks to U.S. healthcare facilities, which includes a mix of public and private hospitals and nursing homes. The spokeswoman would not disclose the names of the facilities or of the additional sources Lindell tapped, though a report favorable to Lindell strongly suggested overseas connections.

The spokeswoman also declined to divulge financial information. However, if Lindell has not ramped up production further and is selling 50,000 masks each day, the specialty project would by now have generated close to three million dollars in sales, assuming weekday production and a low-price point of $2.00 a mask.

"Every time I go into those prisons, and I ask my guys how many of them had their sentences reduced and they raise their hands, I know I'm doing God's work," he said. "And I thank you for that."

Brewer confirmed he led Lindell's task force and said he was busy sourcing equipment and coordinating logistics. He declined to comment further, citing concerns about looming stories in the press and referring questions back to MyPillow's office.

"Media folks have been poking around trying to do negative stories," Brewer explained. "I just want to keep doing what I can to help people."

"Mike talks about the Bible," he added. "There's some satanic things coming out."

The Trump administration has taken near-constant fire for its failed efforts to patch up a grievous shortage of medical masks as coronavirus infections broke across the country. This includes confusion over guidance on whether members of the public should wear masks, and if so, what kind. This confusion coincided with a mask shortfall, which itself coincided with a spike in cases concentrated mainly around New York and New Orleans.

That also coincided with the Rose Garden briefing, and a push to enlist private sector companies such as Hanes and Fruit of the Loom — and MyPillow — in a national production effort to make deliver millions of masks to Americans through the U.S. Postal Service. The project was ultimately scrapped, but Lindell is apparently still producing.

The administration last month awarded a mask procurement contract worth eight times the going rate to a bankrupt company with no employees and no mask-making experience. Now shadow task force coordinator Jared Kushner's botched operations are the subject of a whistleblower complaint filed with the House Oversight Committee.

The complaint includes allegations of favoritism to Trump loyalists, such as for a request from Fox News host Judge Jeanine Pirro to deliver large shipments of masks to an unnamed New York hospital. Kushner has reportedly moved on from the mask game to captain a White House task force dedicated to shepherding a vaccine, through collaboration with the private sector.

Lindell, for his part, is apparently focused on the future, assessing demand for specialty products that are not currently manufactured in the U.S. His factories have staggered shifts and breaks and implemented other social distancing measures, but they have not scaled back production, according to his spokeswoman.