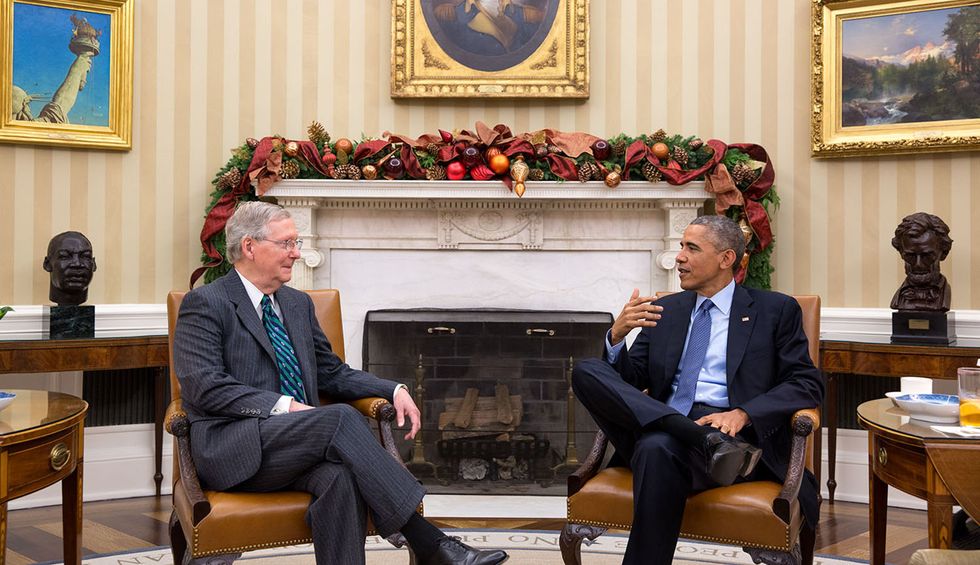 President Barack Obama meets with Senate Minority Leader Mitch McConnell, R-Ky. in the Oval Office, Dec. 3, 2014. (Official White House Photo by Pete Souza) This official White House photograph is being made available only for publication by news organizations and/or for personal use printing by the subject(s) of the photograph. The photograph may not be manipulated in any way and may not be used in commercial or political materials, advertisements, emails, products, promotions that in any way suggests approval or endorsement of the President, the First Family, or the White House.
Bob Brigham
and
Raw Story
May 12, 2020

The Kentucky Republican reportedly said that, “clearly the Obama administration did not leave to this administration, any kind of game plan for something like this.”

Ron Klain, who served as Ebola Czar in the Obama administration, listed three reasons why McConnell was wrong.

“We literally left them a 69-page Pandemic Playbook…. that they ignored,” Klain noted.

“And an office called the Pandemic Preparedness Office… that they abolished,” he continued.

“And a global monitoring system called PREDICT .. that they cut by 75%,” Klain added.

We literally left them a 69-page Pandemic Playbook.... that they ignored And an office called the Pandemic Prepa… https://t.co/r2RJYJxTrp
— Ronald Klain (@Ronald Klain)1589245975.0