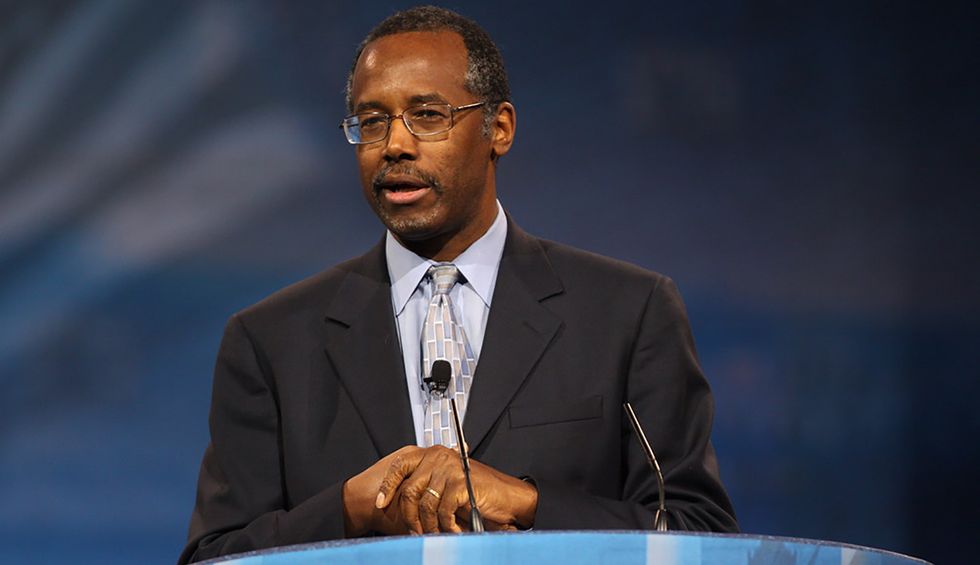 President Donald Trump has tasked an advisory council led by Housing and Urban Development Secretary Ben Carson with developing a plan to restore minority communities to "full economic health" following the impact of the coronavirus pandemic.

"Furthermore, the council will seek input from the private sector and community leaders on how we can best support minority and distressed communities," Trump added, suggesting the new task force would include corporate interests alongside volunteer organizations with a track record of advising the administration, such as the Urban Revitalization Coalition.

The council will also help Congress determine what kind of funding to provide underserved communities in future rounds of financial relief, the president said.

The president also thanked Sen. Tim Scott, R-S.C., the only black Republican in the Senate, during the briefing for being "so helpful with the Opportunity Zones." Scott last year defended a tweet by Trump that likened the impeachment process to a "lynching."

The coronavirus pandemic has had a disproportionate impact on minority populations across the country, from the infection itself to the economic fallout precipitated by effort to combat it.

"We have a particularly difficult problem of an exacerbation of a health disparity," Dr. Anthony Fauci, director of the National Institute of Allergy and Infectious Diseases, said. "We've known literally forever that diseases like diabetes, hypertension, obesity and asthma are disproportionately afflicting the minority populations, particularly African-Americans . . . Health disparities have always existed for the African-American community, but here again with the crisis, how it's shining a bright light on how unacceptable that is."

The virus has been more than twice as deadly for black and Latino populations in the city of New York, and the economic crash has been particularly acute for Latino communities.

"We're really building ourself a strong base, and we're building ourself a wall that's very different from the kind of walls that you've been hearing me talking about," Trump said Wednesday, describing the returns he expects from the ORC. "But it nevertheless, in many ways, performs the same function, and hopefully, it's going to perform it equally as well."

Trump created the ORC with a 2018 executive order, which defined its purpose "to encourage public and private investment in urban and economically distressed areas, including qualified opportunity zones."

The council is led by Carson, a pediatric brain surgeon and the only black member of Trump's Cabinet. It comprises 13 other Cabinet heads, as well as official economic advisers.

Though the list of "private sector and community leaders" with whom the council will collaborate remains unclear, if history is any indication, the list will likely include members of the Urban Revitalization Coalition (URC), a nominally volunteer organization with close ties to the Trump administration and campaign.

URC founders Kareem Lanier and Darrell Scott — an official Trump campaign advisor — were instrumental in creating the Opportunity Council. The two are close with Carson and met regularly at the White House while advising the administration.

Politico reported in February that the URC was holding campaign-tinged events with cash giveaways for black voters in poor communities. The watchdog Citizens for Responsibility and Ethics in Washington (CREW) raised "serious concerns that the organization is engaged in political activity aimed at promoting the President's reelection effort in violation of IRS regulations governing section 501(c)(3) organizations."

Darrell Scott, who presents himself as a reformed from a life of drugs, received an honorary doctorate in 2004 from the unaccredited St. Thomas Christian College. He is also the founder and pastor of the non-denominational New Spirit Revival Center, which is headquartered in a former Jewish synagogue and has its own radio station.

And Darrell Scott is close with Trump. A routine visitor of the White House, he has traveled with Trump multiple times on Air Force One and watched the 2018 midterm returns with the president. Darrell Scott can frequently be seen on the sidelines when the administration and the campaign makes appeals to black voters.

The URC's tax status bars it from political activity. CREW revealed in February that the URC received a $238,000 grant from America First Policies, the dark-money affiliate of Trump-backing Super PAC America First Action. But "despite being founded in June of 2017, URC does not appear to have a publicly available tax return, raising questions about whether the group ever filed the required forms," CREW said.

Salon can report that the URC filed for tax-exempt status in 2018, though it did not receive the status until 2019.

The URC operates what appears to be a purposefully dysfunctional website: the "donations" button does not work, and it lists a fake phone number and email address.

Lanier and Darrell Scott are also members of the National Diversity Coalition, a minority-advocacy group created by former Trump lawyer Michael Cohen in 2016. Cohen later released a taped conversation with Trump in which the two discussed hush money for a former Playboy model. In that conversation, Cohen brought up Darrell Scott, at the time a campaign adviser, whom Trump confused with another black man on his campaign.

When Trump signed the executive order creating the Opportunity Council, he called on Darrell Scott by name. He called on Sen. Tom Scott moments earlier.

Carson, Lanier and Darrell Scott did not respond to Salon's request for comment.