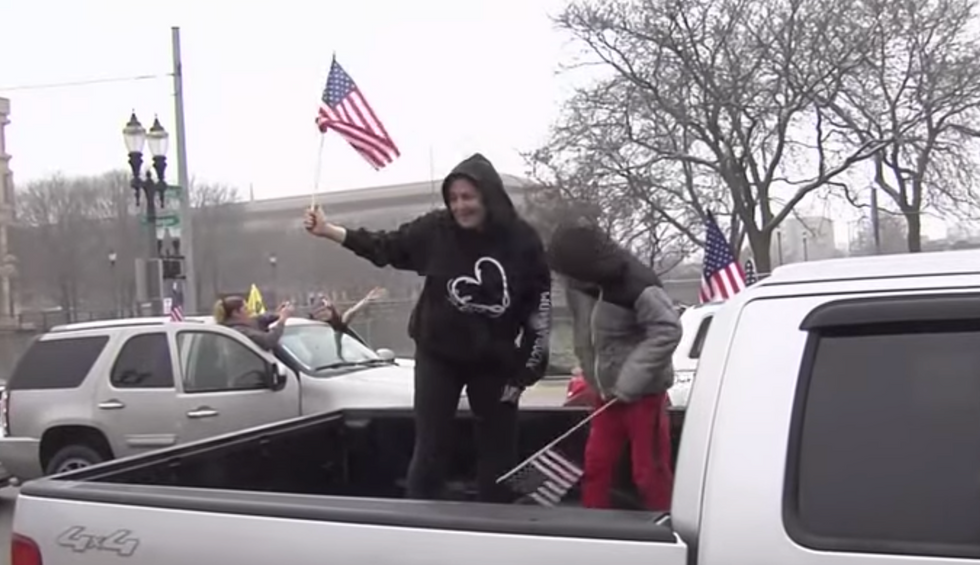 As reporting Wednesday revealed an internal government document warning of "a significant risk of resurgence" of the coronavirus even in a phased reopening scenario, right-wing activists in Michigan staged protests outside the state capitol to boldly defy Gov. Gretchen Whitmer's extended stay-at-home order designed to protect public health.

Dubbed "Operation Gridlock," the event was organized by the Michigan Conservative Coalition and Michigan Freedom Fund. The groups called on people to circle their vehicles around the state capitol building in Lansing in order to create a traffic jam.

That Facebook event call-to-action asks participants to stay in their cars, but videos and photos shared on social media show many people standing outside the building. Those protesters appear to be participating in a simultaneous protest launched by the newly created Michiganders Against Excessive Quarantine. Those protesters, many standing on the steps of the capitol, are seen not adhering to social distancing guidelines, openly carrying weapons, holding pro-President Donald Trump flags, and singing chants including "Recall Whitmer."

"Half protest, half Trump rally is how I would characterize #OperationGridlock in Michigan," MLive reporter Malachi Barrett said on Twitter.

The action came in for criticism from advocacy group Progress Michigan.

According to Lonnie Scott, executive director of the progressive organization, "These fringe groups have one goal: attack Gov. Whitmer for anything, even if it means sending a dangerous message about the importance of social distancing during a global pandemic."

"Normally we wouldn't give these childish games the time of day," added Scott, "but we think it's important that the people of Michigan know who these people really are and the fact that a group supported by one of Trump's cabinet members, Betsy DeVos, is at the helm of this dangerous ship."

The action in Michigan Wednesday came the same day the Washington Post published a leaked draft of an internal planning document by the CDC and FEMA in which government officials warned of a "significant risk of resurgence" of the infectious disease even with a controlled reopening of schools, businesses, and other public activity.

According to the Post, the draft strategy document "warns of a 'large rebound curve' of novel coronavirus cases if mitigation efforts are relaxed too quickly before vaccines are developed and distributed or broad community immunity is achieved."

As of this writing, there are over 601,472 confirmed cases of COVID-19 in the United States and over 24,429 deaths. Michigan is the state with the fourth highest number of confirmed cases—27,001. There have been 1,768 Covid-19-related deaths in the state.