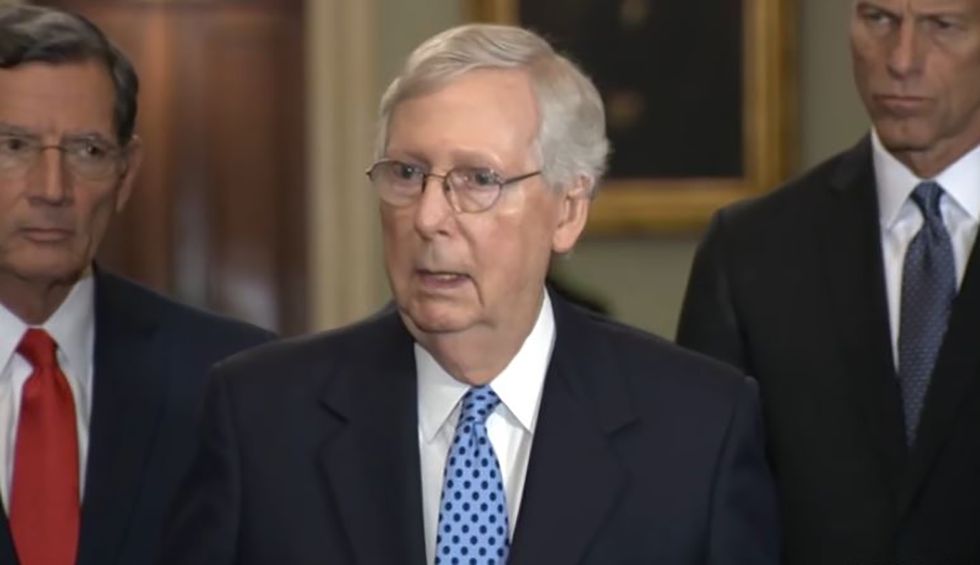 If you're listening to politicians, you hear them sing bipartisan praise for the heroes who march bravely into the viral storm every day. They constantly eulogize doctors and nurses, cops and firefighters, but also those who maintain essential services amid the coronavirus catastrophe -- from grocery clerks to delivery drivers to sanitation workers, train conductors and traffic engineers. Suddenly, we have all realized that those good people, whose thankless toil we took for granted, deserve our gratitude and respect.

Or so it seemed until Mitch McConnell opened his mouth and proved that, to him at least, those civic accolades mean nothing.

When the Senate majority leader told a right-wing radio host this week that he opposes any further federal aid to states and localities, encouraging them to seek bankruptcy protection instead, his message could not have been clearer. As far as McConnell is concerned, every city and town in America devastated by the coronavirus, and every state that will be, should simply drop dead -- and so should its heroic employees. His sneering reference to "blue state bailouts" piled demagogic insult onto the grave injury he means to inflict.

That injury would only begin with the abrogation of hard-won pensions, health care and other benefits won by unionized public employees -- including cops, firefighters, emergency workers and teachers whose contribution to society we have supposedly learned to value in this crisis. Driving the states and cities into bankruptcy will damage every working family as schools and colleges decline, parks deteriorate, critical services falter and every aspect of public life decays.

For a partisan extremist like McConnell, "we're all in this together" is a slogan for suckers. Both his selfish ideology and his servility to wealthy special interests mock any sincere appeal to patriotism, shared sacrifice or civic duty. Only political expediency can ever force him to do the decent thing, and he will invariably attempt to steer every act toward a self-serving result.

It is the same attitude that dispatches a press release from McConnell's office with a nasty headline about "blue state bailouts" when he knows full well how falsely that slur reflects our country's fiscal reality. The cosmopolitan, free-spending blue states have subsidized red states like his old Kentucky home for the past century. Every year, blue states pay billions more in federal taxes than they ever receive from Washington in benefits, while red states receive billions more than they ever send.

New York, as Gov. Andrew Cuomo noted the other day, is among the states that receive the least and cough up the most, with the difference adding up to almost $27 billion in fiscal 2019. Kentucky fares far better, depending on the metrics used, with both its residents and its state government collecting billions more than they pay in federal taxes.

Which is why Republicans like McConnell complaining about federal entitlements is so laughable. Nobody acts more entitled than a "fiscally conservative" senator with his palm outstretched.

Their enduring debt to the blue states has never stopped McConnell and his red-state caucus from biting the hands that literally feed them. Three years ago, when congressional Republicans passed the Trump tax bill, which swindled the middle class on behalf of billionaires, they included a provision cutting the state and local tax deduction -- a calculated attack on the economic health of mostly Democratic states with higher taxes and better services. (President Trump's endorsement of that spiteful scheme is one more reason why he and his family, along with Treasury Secretary Steven Mnuchin, will forever be despised in their hometowns.)

Nobody can truly be surprised by McConnell's open hostility toward his fellow Americans, whom he regards only as political enemies. "Moscow Mitch" is friendlier to America's adversaries in Moscow and Beijing than he is toward his compatriots in New York, Los Angeles or Boston. Like Trump and most of the Republican leadership, he doesn't hesitate to aggravate regional, racial or cultural divisions in pursuit of power. Starving the cities and state during a pandemic would only be another chapter in that bleak narrative.

In this unprecedented moment, however, McConnell may not get away with his usual vandalism so easily. Governors of both parties, including his own state's popular Democratic governor, Andy Beshear, have bluntly rebuked his shortsighted rejection of federal aid. On Friday, Cuomo went further, daring McConnell to pass the legislation necessary to allow states to go bankrupt. "You want to send a signal to the markets that this nation is in real trouble? You want to send an international message that the economy is in turmoil? Do that," said the New York governor.

Whatever McConnell does, Americans should remember that when the Republican leader showed his true colors, they were not red, white and blue.