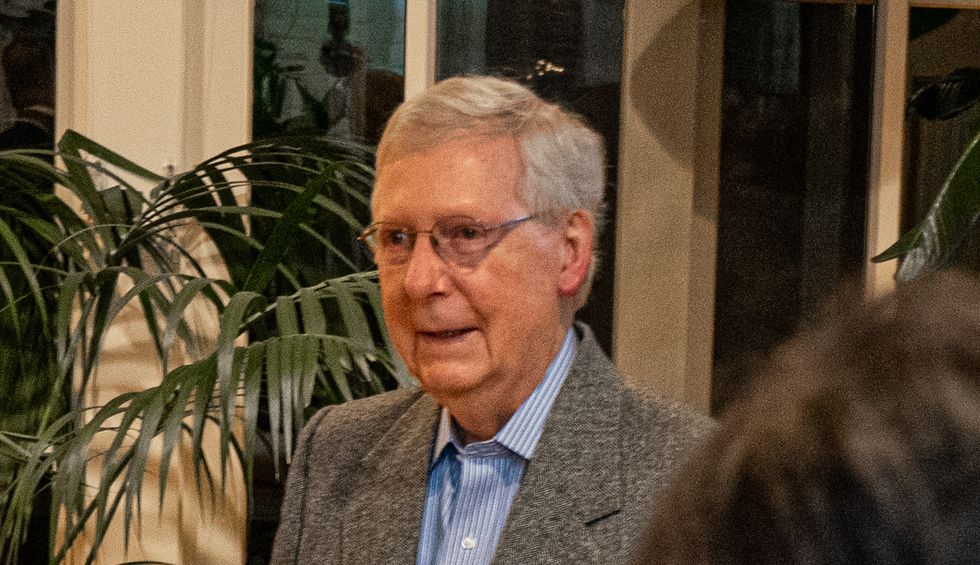 When supporters of President Donald Trump are asked what they like about Senate Majority Leader Mitch McConnell, judges are often at the top of the list: the Kentucky Republican has been quite forceful when it comes to getting far-right judicial nominees confirmed by the U.S. Senate. And NBC News journalist Leigh Ann Caldwell reports that getting even more judges confirmed will be a high priority for McConnell when the Senate is back in session.

Caldwell explains that in recent weeks, judicial nominations have been “sidelined” because of the coronavirus pandemic. But when the Senate is in session again, according to Caldwell, those nominations will be McConnell’s top priority.

“McConnell’s decision to bring the Senate back to Washington with no immediate plans to take up additional coronavirus relief legislation has left some members uneasy about traveling when stay-at-home orders remain intact in most states and the congressional attending physician recommends that Congress stay away for now,” Caldwell reports. “But McConnell, R-KY, has said the pandemic isn’t going to get in the way of confirming judges, telling a conservative radio host recently that his ‘motto’ for this year is ‘leave no vacancy behind.’”

The “conservative radio host” Caldwell is referring to is Hugh Hewitt. Last week, during an appearance on Hewitt’s radio program, McConnell asserted, “As soon as we get back in session, we’ll start confirming judges again. My motto for the year is ‘leave no vacancy behind.’ That hasn’t changed. The pandemic will not prevent us from achieving that goal.”

McConnell, according to Caldwell, is “particularly focused on two controversial Appeals Court nominees who, if confirmed, would leave no more vacancies on the Circuit Court level.” One of them is U.S. District Judge Justin Walker, who has been nominated for a position on the D.C. Circuit Court of Appeals; Walker, Caldwell notes, was a “vocal defender” of U.S. Supreme Court Justice Brett Kavanaugh during his Senate confirmation hearings in 2018. And the other is Fifth Circuit nominee Cory Wilson.

Much of the focus on McConnell’s record with judicial nominees has been on nominees for the U.S. Supreme Court. Infamously, McConnell refused to even consider President Barack Obama’s last nominee: Judge Merrick Garland, whose judicial record was quite centrist. But after Trump became president, McConnell did everything he could to ram through his Supreme Court nominees: first Neil Gorsuch in 2017, then Brett Kavanaugh in 2018.

But McConnell’s influence on the judiciary goes way beyond the U.S. Supreme Court, and in an article published by The Federalist on November 21, 2019, writer Erielle Davidson pointed out that “almost 30% of Circuit Court judges in the United States” were “Trump appointees.” Davidson asserted that Trump, with McConnell’s help, has had a “tremendous impact on the federal judiciary —  reverberations of which will likely continue for decades after his presidency, particularly given the younger age of most Trump appointees and the lifetime tenure that accompanies a judicial appointment. Trump has appointed and confirmed double the number of Circuit Court judges that Obama appointed and confirmed at the same point in his presidency.”

McConnell’s record with judicial nominees is one of the main reasons why Democrats are hoping to obtain a majority in the U.S. Senate this year. Even if Trump is reelected, he would have a hard time getting far-right judicial nominees through a Democrat-controlled Senate.

When Davidson wrote that Federalist article in November, she noted that “leave no vacancy behind” was McConnell’s new motto for the judiciary. And as Caldwell’s reporting for NBC News demonstrates, it’s a motto that — unfortunately — the Senate majority leader still takes seriously.