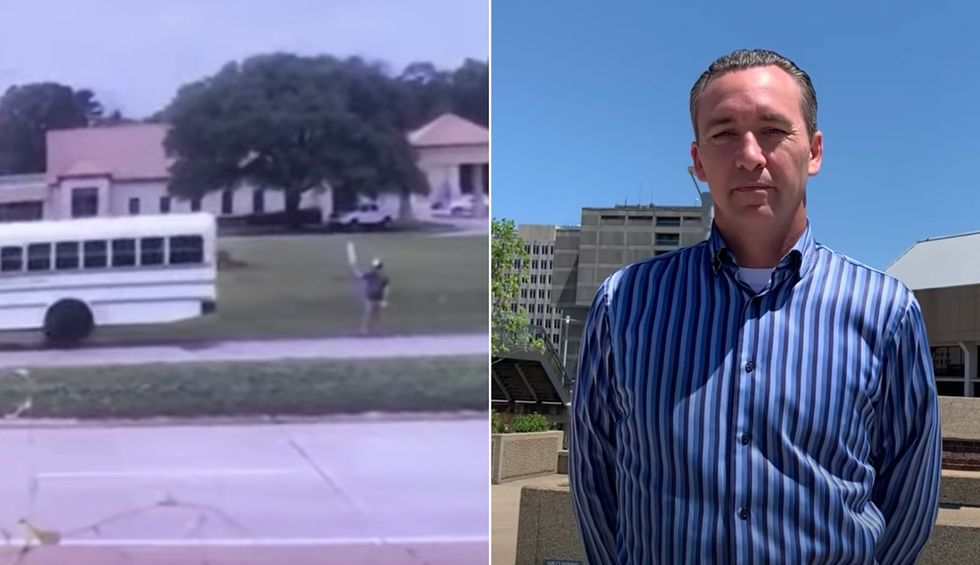 Pastor Tony Spell, who has previously been arrested on misdemeanor charges for holding crowded church services in spite of Louisiana’s stay-at-home orders limiting crowd sizes to slow the spread of the novel coronavirus pandemic, was arrested again as of Tuesday morning. What are the allegations this time? The arrest warrant accused Spell of aggravated assault, spurred by footage that appeared to show Spell reversing a church bus toward a protester. According to the Associated Press, Spell turned himself in at the station, where he was charged with improper backing and aggravated assault. As KSLA reports, because the building is closed, Spell was arrested in the parking lot. He was released a few hours later, where parishioners greeted him in the parking lot.

In the video embedded in the middle of this post, the white bus appears to be moving backward toward a protester outside of the Life Tabernacle Church in Baton Rouge, Louisiana. In an interview with WAFB, Spell confirmed that it was he driving the bus. He did not hit the protester.

“I was pulling in from my bus route, picking up black children who haven’t eaten because of this sinister policy that has closed schools. I was going to approach this gentleman and ask him to leave,” he told the local outlet, adding that the man allegedly “shouts vulgarities” and displays “obscene finger gestures.”

"A fair viewing of the video will prove that Spell did not attempt to run over the protester, and the protester did not feel threatened, as he never moved when the bus came near," Joseph Long, one of Spell’s attorneys, said on the incident.

The protester, Tony Bennett, tells a different story. “I could see him driving the bus,” he alleged to WFLA. “He was honking his horn loudly at me and making gestures suggesting he was yelling while he was driving. It didn’t seem real until it was physically in my face with a bus.” He denies profanities and obscene gestures and maintains his protest was a peaceful one. Here is that video:

According to WAFB, one of his protest signs reads: “CAUTION: Coronavirus incubator. Do not enter. You may die.”

The pastor says reports that a 78-year-old member of his church has died from the coronavirus is a lie, and that the man in question actually died because of separate medical issues. He has also gotten media attention by encouraging parishioners to donate their $1,200 stimulus checks to the church. Why? Because “evangelicals” and “missionaries” do not get stimulus packages, as he suggested to CNN in an interview.

He has a “stimulus challenge” video up on YouTube:

"They're trying to make a mockery of this, like he's some kind of victim. No one, not one person, is trying to stop him from preaching the word,” police chief Roger Corcoran told NBC News in an interview about their efforts to enforce the statewide stay-at-home order.