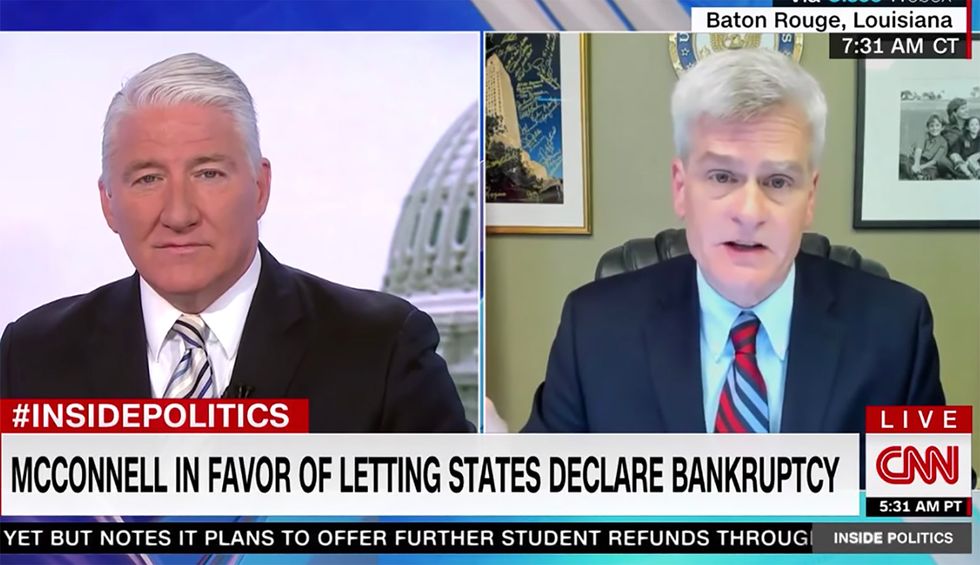 CNN’s John King was forced to cut off and fact-check a Republican Senator on Sunday morning who tried to dismiss Donald Trump’s comments about using common household disinfectants as a means to cure coronavirus patients.

Speaking with Sen. Bill Cassidy (R-LA), who was a gastroenterologist before entering the Senate, host King asked about Trump’s startling comments that the president later claimed were “sarcastic.”

“You’re a senator, but you’re also Dr. Cassidy,” King began. “I’m interested in your perspective. If you look at Google searches this past week, after the doctor talked about sunlight and using disinfectants, you see a spike for searches for inject yourself with disinfectant. We’re in the position this past week where the Centers for Disease Control and U.S. Surgeon General had to put out public statements saying, and this is my translation, don’t listen to the president, be careful here.”

“As a doctor, what goes through your mind when the president dispenses medical advice and have you ever thought about picking up the phone and saying, ‘Sir, please, don’t,'” he asked.

“I need to interrupt there, I hope you’re right,” King interjected. “If you talk to the — on the Maryland hotline, they got a lot of phone calls. He [Trump] puts the nugget in people’s minds. If he hadn’t mentioned it, those searches don’t happen, those phone calls don’t happen, the time is not wasted and we can get to the point you’re trying to make.”

“So, we can talk about Lysol, if you want to, John, we really can,” the Republican shot back. “What we should be talking about is how do we use data in order to keep people safe and reopen an economy.”

“That’s not Lysol, but it is what opens our economy and that’s what I focus on,” he continued.

“We also have to cover the president of the United States when he says things,” King replied.