A fox guarding the henhouse: How Trump's labor secretary failed workers as the pandemic raged 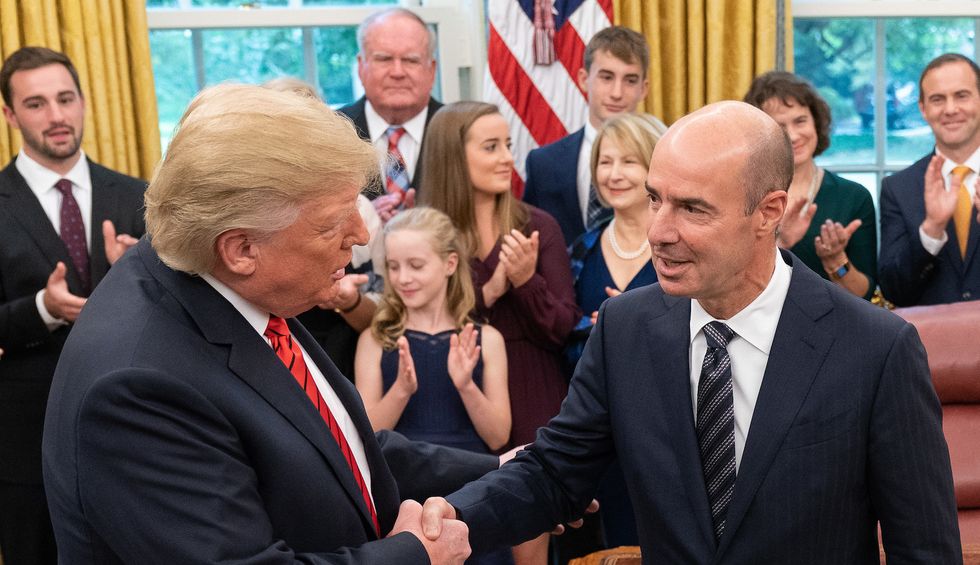 Thousands of workers across America begged the Occupational Safety and Health Administration (OSHA) to investigate when their employers failed to take steps to protect them from COVID-19. They reported a lack of face masks, gloves, soap and hand sanitizer. They warned of having to share desks and stand right next to one another on production lines, despite the need for social distancing to slow the spread of the disease. They put their faith in OSHA and waited for the agency to come to their aid.

OSHA—the agency responsible for America’s workplace safety—left workers to fend for themselves during the biggest health crisis in recent history.

There’s a reason for the agency’s dereliction of duty.

Scalia—the son of the late right-wing Supreme Court Justice Antonin Scalia— made a fortune at a Beltway law firm helping greedy corporations cheat workers out of decent pay and skimp on safety.

He criticized OSHA for overzealous inspections. He opposed rules to protect Americans from repetitive strain injuries. He opposed health care benefits for low-wage laborers and argued that workers, not employers, should pay for personal protective equipment (PPE) needed on the job.

Now, with Scalia in charge, it’s no wonder OSHA ignores demands for inspections and turns a blind eye when workers request respirators, gloves and other measures to save them from COVID-19.

Even during a pandemic, Scalia wants to make sure corporations don’t spend a penny more or go a step further than they deem strictly necessary. His disregard for working class people makes the virus all the more dangerous.

He failed workers just as the labor unions and other advocates that opposed his confirmation knew he would.

Right now, many workers remain under government orders to do their jobs at home to slow the spread of the coronavirus.

But millions of Americans—health care professionals, delivery drivers and manufacturing workers, for example—put their lives on the line and go to work every day because that’s what the nation needs them to do.

They’re the heroes of America’s economy and deserve whatever protection the nation can give them.

Labor unions, including the United Steelworkers (USW), are leading the fight for worker health and safety.

In March, a group of unions demanded that OSHA implement an emergency, temporary infectious disease standard that would specify the steps employers must take to keep workers safe. Consistent, uniform safety controls and precautions would help slow the virus’ spread, and enforcement measures would ensure employers’ compliance.

In a crisis like this, federal law authorizes OSHA to avoid the usual, time-consuming rulemaking process and implement an emergency, temporary standard to keep workers from getting sick and dying.

Labor unions implored Scalia to invoke this power. He refused. Because of that, workers paid a heavy price.

It isn’t just workers’ health that’s at stake. The coronavirus can sweep through workplaces, shutting them down and disrupting the nation’s production of food and other essential goods.

Instead of promulgating rules and holding employers accountable for worker safety during the pandemic, OSHA merely provided guidance that employers are free to accept or reject.

Many ignore the guidance and continue to operate as if the health crisis didn’t exist.

Since January, more than 3,000 workers contacted OSHA to complain about employers’ failure to take basic steps to protect them from COVID-19.

One person warned about a call center where workers sit only 2 feet away from each other, even though social distancing guidelines call for a separation of at least 6 feet. Another worker reported a delivery company that forced drivers to disinfect their vehicles without any training on safety and health practices.

Other complaints came from retail workers who reported unsanitary conditions, health care professionals who decried a lack of respirators and laborers at meat-processing plants forced to stand almost on top of each other.

Although OSHA prioritizes complaints about conditions in health care settings, it’s expected to forgo fines except for the most egregious violators.

What’s more, complaints from workers in other industries just fall into a black hole. OSHA all but refuses to investigate them.

Instead, it wants employers to investigate the complaints themselves and notify the agency about any corrective action they take. If OSHA is dissatisfied with the corporation’s response, it will consider an inspection.

In other words, OSHA chooses to rely on the good faith of employers to correct hazardous conditions they never should have permitted in the first place.

Under OSHA’s rules, many employers don’t even have to investigate whether a worker with COVID-19 contracted the virus on the job.

That will only make it more difficult to control COVID-19 in the workplace and get an accurate tally of how many workers died after contracting the virus at work.

When OSHA abandoned workers, some states stepped up to fulfill the responsibility.

That kind of regulation is better than nothing. But consistent federal rules—applying to employers in every state—are what’s really need to control the pandemic.

On Tuesday, the nation will mark Workers Memorial Day—an annual occasion for America to mourn those lost in workplace incidents over the past year and rededicate itself to improving occupational health and safety.

Because of the pandemic, the day takes on added significance this year.

COVID-19 added to the toll of workers killed on the job and underscored the low priority that Scalia’s OSHA gives to workers’ lives.

Workplace infections and deaths from the coronavirus could be prevented, if only Scalia lived up to his title as labor secretary and empowered OSHA to do its job.