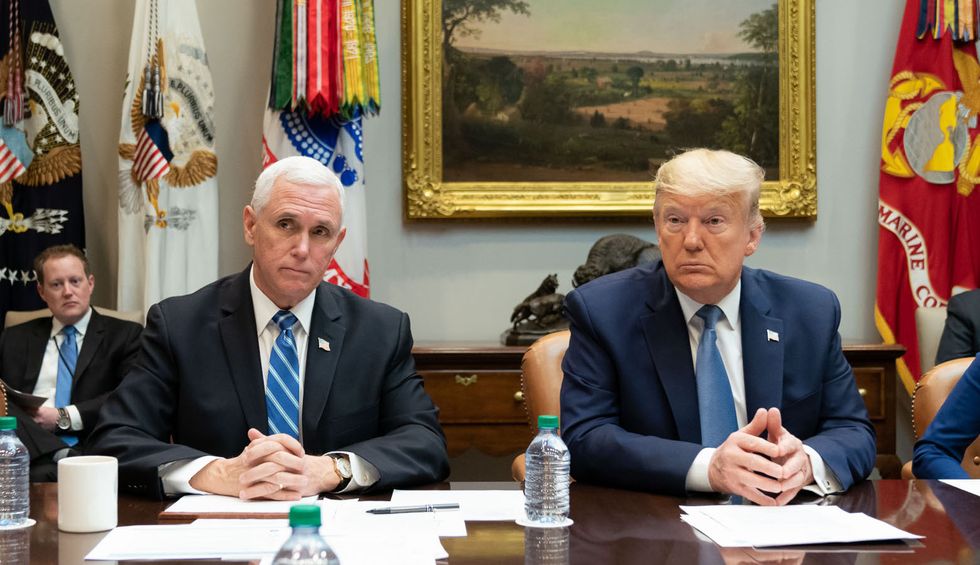 This time, Donald Trump’s decisions are costing American lives. Congressional Republicans are complicit because they didn’t reign him in, and haven’t called him out.

He ignored two years of warnings that America was not equipped to handle a pandemic, that his approach would lead to the loss of lives, and that his ongoing cuts to our defenses would make America vulnerable to the “significant probability of a large and lethal modern-day pandemic.”  Now the pandemic has hit, and we’ve never been less prepared, thanks to Trump’s actions and inactions.

In 2018, he fired Homeland Security Adviser Tom Bossert, who had called for a comprehensive biodefense strategy against pandemics. A month later, Trump’s National Security Council advisor John Bolton disbanded the entire team of Timothy Ziemer, Trump’s senior director for global health, and never replaced it. Dr. Luciana Borio, the NSC's director for medical and biodefense preparedness, left in May 2018 and was also not replaced.

The administration’s pandemic response chain of command is in disarray. Trump agency heads and advisers clash over who’s in charge. State leaders bemoan the lack of a clear leader.

In November 2019, a blue-ribbon bi-partisan commission warned “the American people are far from safe,” and urged  Trump to reestablish strong leadership on health at the NSC and invest more in biodefense. “The U.S. must either pay now [or pay] much greater…human and economic costs” when a pandemic hits,” it argued.

Instead, Trump proposed defunding the Centers for Disease Control’s (CDC) efforts to help other countries combat epidemics and prevent infectious diseases from invading America.  He also proposed to cut discretionary funding for the CDC.

Trump’s 2020 budget slashed the CDC 10%, and the U.S. Department of Health and Human Services (HHS) 12% --  “devastating” cuts at a time when state and local health departments have 50,000 fewer workers than they did in 2008. Also cut was a $30 million emergency response fund created under Obama to deploy experts in the event of a crisis.

As a result, not only has there been a shortage of corona test kits, but the kits sent to labs weren’t usable for weeks. 300 million respirator masks are needed by healthcare workers; the government had only 12 million, many of which had expired.

On March 5, Trump finally signed an $8.3 billion bill to fight coronavirus (which he might not have needed to do if he hadn’t decimated funding for the CDC, HHS and others). But it was too late to instill calm, particularly in the markets. In the two days following the law’s announcement, the Dow Jones plummeted 1224 points. At present writing, it’s more than 5000 points off its pre-corona high (29,551 on February 12).

It’s the president’s job to calm the country in a crisis. But it’s hard to believe a president who has told more than 16,000 lies and counting, who repeatedly contradicts his public health experts, and who blames everything on his critics.

Trump told us  “the risk to the American people remains very low.”  The World Health Organization told us that the outbreak presents the “highest level” of risk for the world.”

Trump said the mortality rate from coronavirus was 2% and the number of cases in the U.S would "within a couple of days [be] close to zero.”  But U.S. cases are proliferating, and health experts warn the virus will continue to spread. The World Health Organization says the mortality rate among documented cases so far is 3.4%, and actual mortality could be higher, depending on the quality of the local healthcare system.

Trump calls 3.4% mortality a “false number.” But it’s his numbers that are misleading.  He cited the March 6 tally of coronavirus in the U.S. -- 225 cases and 14 deaths -- and high recovery rates, as evidence health risks are low. But we missed the bulk of U.S. cases due to problems with testing protocols.  At present writing, in the U.S. there are actually 1,016 cases, 31 deaths, and 15 recoveries we know of.  That’s a 3% mortality rate, and both the incidence and the mortality rate are trending up.

Trump claimed that his administration was very close to a vaccine. His acting Homeland Security Secretary Chad Wolf promised it would be ready within “several months.” The WHO begged to differ, saying a vaccine would take "at least a year to a year and a half at best.”

Trump said the vaccine would be affordable for those who need it. On the same day, Health and Human Services Secretary Alex Azar  told Congress, “we can’t control that price.” Azar ought to know; he was head of operations for pharmaceutical giant Eli Lilly. His concern may be more about Big Pharma profitability than containing the virus.

Trump’s supporters and Republicans in Congress have tolerated Trump’s incompetence, corruption, tailoring foreign policy for his own financial gain and coddling Vladimir Putin and Kim Jong-un. None of those things made much of a dent in Trump’s core support.

But this is different. Trump’s actions are costing American lives, and that may cost him some support.  He once boasted, “I could stand in the middle of Fifth Avenue and shoot somebody and I wouldn’t lose any voters.”  It seems that theory is about to be tested.