Trump's incompetence made the COVID-19 outbreak worse. Now he may spread the disease further to save his own skin 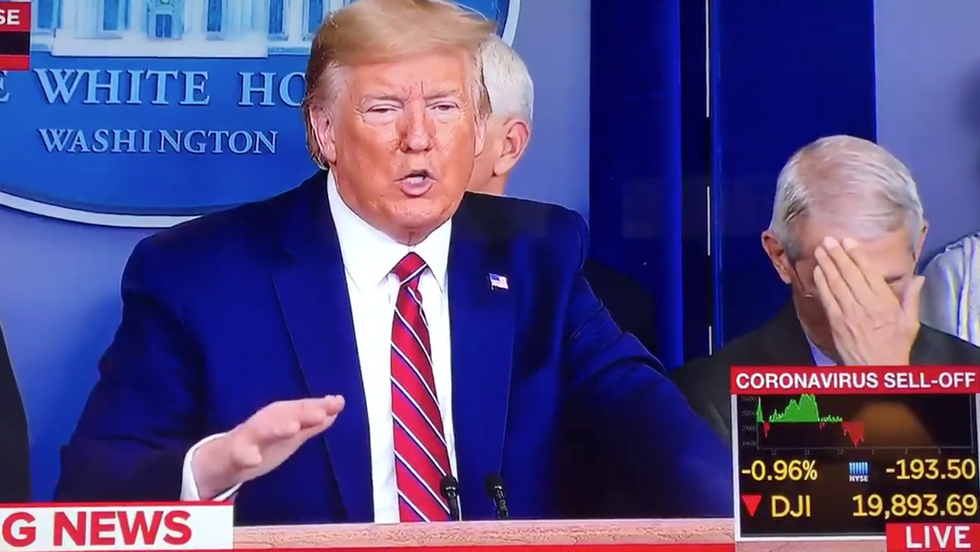 The reason why tens of millions of Americans are staying at home, watching their retirement accounts drop if they're lucky enough to have one, is that the United States was woefully unprepared to conduct proper disease surveillance in the early stages of the COVID-19 pandemic. If we had had sufficient testing early enough, we could have identified and isolated the infected. Because we didn't--and because we still lack testing capacity even now, months into the outbreak--we have to isolate the healthy in order to drag out the spread of the infection so a surge in new cases doesn't overwhelm our healthcare system, and hopefully for long enough that effective vaccines and/or antivirals can be developed and brought to market.

Our underfunded disease surveillance system predated Donald Trump's presidency, but his leaderless regime aggravated the problems by disbanding the NSC's pandemic team and cutting funding for the CDC and other relevant agencies.

And he is directly and personally responsible for spending weeks downplaying the severity of the outbreak instead of ordering ramped-up production of testing equipment, masks, etc. Even today, Trump claims to be a "wartime president" but he refuses to act like one...

This should be getting **much** more attention than it is: according to @nytimes, @USChamber and unnamed corporatio… https://t.co/t7IZEK1pyM
— Richard Yeselson (@Richard Yeselson)1584971497.0

On the testing side, The Washington Post reported that "interviews with a dozen laboratory experts and government health officials reveal a six-week series of glitches, missed opportunities and delays that contributed to the shortage."

“They’ve simply lost time they can’t make up. You can’t get back six weeks of blindness,” said Jeremy Konyndyk, who oversaw the international response to Ebola during the Obama administration and is a senior policy fellow at the Center for Global Development. “To the extent that there’s someone to blame here, the blame is on poor, chaotic management from the White House and failure to acknowledge the big picture.”

While that lost time can't be made up, the "social distancing" now underway in most communities has proven effective in "flattening the infection curve." But in his short-sighted obsession with his own electoral prospects, Trump seems intent on making the situation even worse, according to a report in today's WaPo.

President Trump is weighing calls from some Republican lawmakers and White House advisers to scale back steps to contain the coronavirus despite the advice of federal health officials as a growing number of conservatives argue the impact on the economy has become too severe, according to several people with knowledge of the internal deliberations.

Loosening restrictions on social distancing would override the internal warnings of senior U.S. health officials, including Anthony S. Fauci, who have said the worst of the pandemic has yet to be felt in the United States.

“WE CANNOT LET THE CURE BE WORSE THAN THE PROBLEM ITSELF,” Trump said in a late-night tweet Sunday. “AT THE END OF THE 15 DAY PERIOD, WE WILL MAKE A DECISION AS TO WHICH WAY WE WANT TO GO!”

It's impossible to overstate how irresponsible and destructive this would be. If the surge in demand for hospital beds, respirators, drugs and protective equipment for healthcare providers overwhelms demand, hundreds of thousands of people may die needlessly. And if that happens--if the bodies start piling up outside of hospitals and clinics--people are just going to stay home anyway and the economy won't recover anytime soon.

We can shut it down now, before we experience widespread morbidity and mortality, or it can shut itself down after the worse has come. These are our choices.