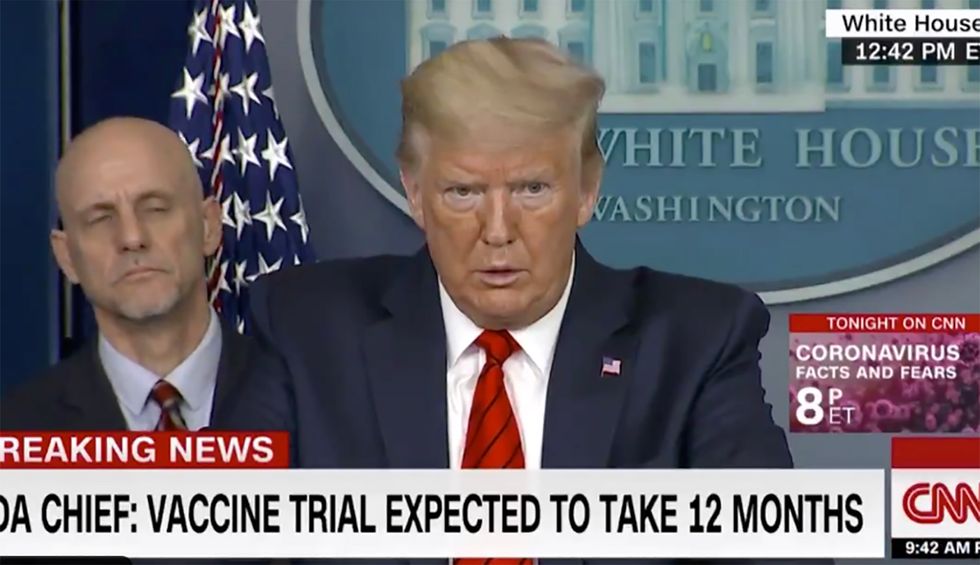 Appearing on CNN's "New Day," national security expert Juliette Kayyem scoffed at a promise that Donald Trump made on Twitter Sunday night, where the president claimed his administration would have a good idea about how to handle the coronavirus pandemic in 15 days and go from there.

According to Kayyem, the president is selling hope and not facts.

Speaking with host John Berman, Kayyem noted the president's all-cap proclamation, "WE CANNOT LET THE CURE BE WORSE THAN THE PROBLEM ITSELF. AT THE END OF THE 15 DAY PERIOD, WE WILL MAKE A DECISION AS TO WHICH WAY WE WANT TO GO!"

"It's a surprising tweet, so let me just make it clear," she began. "No country has done this in 15 days -- not even the most aggressive totalitarian countries. The 15 days was a way of sort of making it easy on us, but we're not doing aggressive nationwide social distancing, so it's a bit of an experiment."

"Social distancing buys us time, but what does it buy time for?" she asked. "On the far end the vaccine, which no one thinks will be distributed for 18 months. But well before that there's going to be mitigation measures, treatment, greater capacity to help the doctors and the nurse. There's going to be other ways that we can protect people; more testing for example. We're just buying time."

"This 15 days is bogus," she insisted. "I mean, it's just a number out there. We will see where we are in 15 days and my concern with this tweet -- and I've been wondering what Trump's plans are -- is that he has been looking for a quick fix, a vaccine, treatment. There's no quick fix."