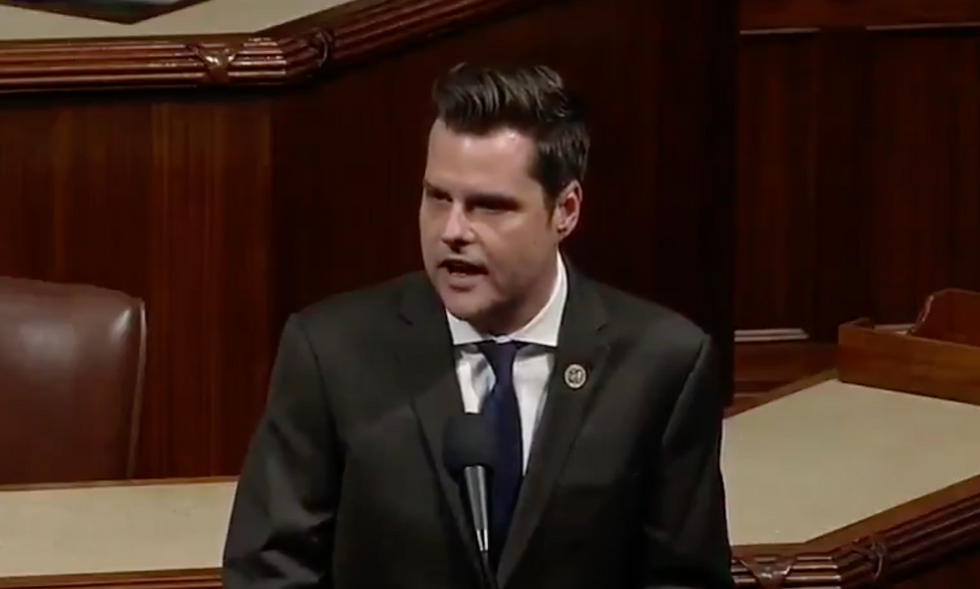 Republican Rep. Matt Gaetz is such a tool that it’s hard to write anything that doesn’t begin with the sentiment that Matt Gaetz is a tool. He’s a dull tool for sure, and he’s also the man who has threatened witnesses, is a security threat to the United States, and has in general been an all-around prick. He also likes to pull stunts because, not unlike most conservative charlatans, he doesn’t have much else going for him in the way of ideas or intellect.

That being said, on Wednesday Matt Gaetz went around Washington having his photo taken and doing his elected, official work … wearing a full-on gas mask. The only silver lining to this idiotic display of dumb is that if you have ever worn a gas mask before, you know that Rep. Matt Gaetz is walking around realizing he really shouldn’t have decided to wear a gas mask all day. You can see the dumbassery for yourself below.

Gaetz was there to vote on a coronavirus spending bill, which he did indeed vote for. Reportedly, Gaetz told the press that "Members of Congress are human petri dishes. We fly through the dirtiest airports. We touch everyone we meet." Well, can you blame him for being something of a germaphobe? I can’t. Of course, I can be a little cynical and suspect him of stunting for his dad’s home healthcare business, as some of the money coming into Florida to fight the coronavirus will definitely find its way into Gaetz’s inheritance.

People were quick to point out that even here, Gaetz is doing the public harm by not doing what experts say one should do.

And if you want to see footage of Gaetz’s buffoonery on the floor of the House of Representatives in the United States Congress, you can watch this clip of him interacting with his fellow Republicans.

And, of course, Matt Gaetz is dumb.

But the general responses to Matt Gaetz were exactly what you hope for from Twitter on a good day.

And of course, #MattGaetzIsATool began to trend once again.

Could somebody tell Matt these masks work better when absolutely no air enters and give him some Saran Wrap? Please?#MattGaetzIsATool #CoronaVirus https://t.co/gvNzUzyCMZ

Also in the news.

However, when all is said and done, this Tweet may have won the day.