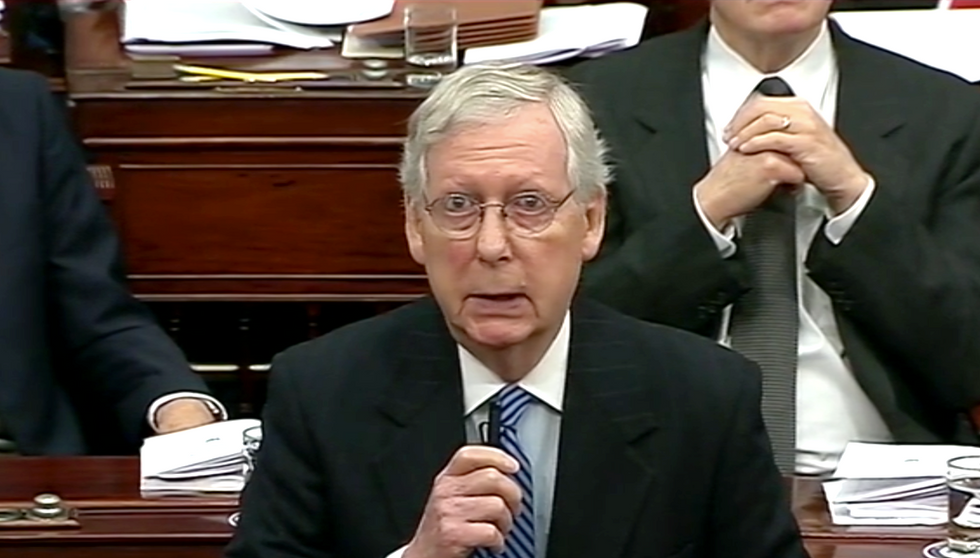 Senate Republicans late Sunday failed to force through a $1.8 trillion coronavirus stimulus package that Democratic lawmakers, union leaders, and progressive advocacy groups condemned as a massive bailout for corporate America that would have done little to address the urgent economic and medical needs of ordinary people.

A procedural motion to advance the Republican bill, formally known as the CARES Act, received just 47 votes Sunday, well short of the 60 needed for passage. Every Senate Democrat present voted no.

"Republicans can't seriously expect us to tell people in our communities who are suffering that we shortchanged hospitals, students, workers, and small businesses but gave big corporations hundreds of billions of dollars in a secretive slush fund."

Senate Majority Leader Mitch McConnell (R-Ky.) scheduled another procedural vote on the legislation for Monday morning at 9:45 am ET as talks over the bill continued through the evening Sunday.

One of the most contentious sticking points in rapidly moving negotiations over the Republican measure was its call for the creation of a $500 billion business relief program that would be controlled by the Trump Treasury Department, headed by former Goldman Sachs banker Steve Mnuchin. The fund would set aside around $58 billion for the airline industry and $17 billion for "sectors considered critical to national security," Roll Call reported.

Democrats and progressive critics condemned the program as a corporate "slush fund" and demanded that any bailout money for businesses come with strict oversight and conditions, such as strong worker protections against layoffs and a permanent ban on stock buybacks.

"In the midst of an unprecedented national crisis, Republicans can't seriously expect us to tell people in our communities who are suffering that we shortchanged hospitals, students, workers, and small businesses but gave big corporations hundreds of billions of dollars in a secretive slush fund," Sen. Patty Murray (D-Wash.) said in a statement announcing her opposition to the GOP legislation.

Progressives like Sen. Bernie Sanders (I-Vt.) are also demanding $2,000 in monthly cash payments to every person in the United States instead of the means-tested, one-time payments proposed by the Republican legislation.

"The job of Congress right now is to do everything we possibly can to protect Americans' lives and wellbeing—not hand out welfare checks to huge corporations," Sanders tweeted.

During a press conference Sunday, President Donald Trump refused to vow that none of the bailout money in the Republican stimulus package would go to his own properties:

"This is a wake-up call," Sen. Elizabeth Warren (D-Mass.) tweeted following Sunday's vote. "Our government needs to take bold action on a grassroots stimulus for the health experts on the frontlines of this pandemic, and for workers and families who need help now. No more slush funds or no-strings-attached handouts. Real relief for the American people."

"We're asking the government to provide grants that keep every aviation worker on payroll, with full pay and benefits, for the duration of the crisis."

Sara Nelson, president of the Association of Flight Attendants-CWA, wrote in an op-ed for The Atlantic Sunday that any coronavirus stimulus legislation must "make sure paychecks and benefits keep flowing for as many working people as possible."

"We're asking the government to provide grants that keep every aviation worker on payroll, with full pay and benefits, for the duration of the crisis," Nelson wrote. "Companies must agree to honor all existing collective-bargaining agreements. And any company that files for bankruptcy as a result of this crisis must be required to put workers first in bankruptcy."

"This bill as introduced is a monumental failure by a shameless group of privileged politicians who have no idea what working people are going through," Shelton said. "This bill must have grants—yes, GRANTS—not just loans—directed to payroll to keep workers employed—and protections for workers and their collective bargaining agreement during any bankruptcy after a bailout. Voting on this package without ensuring workers come first would make this a historically embarrassing day for the United States Senate."