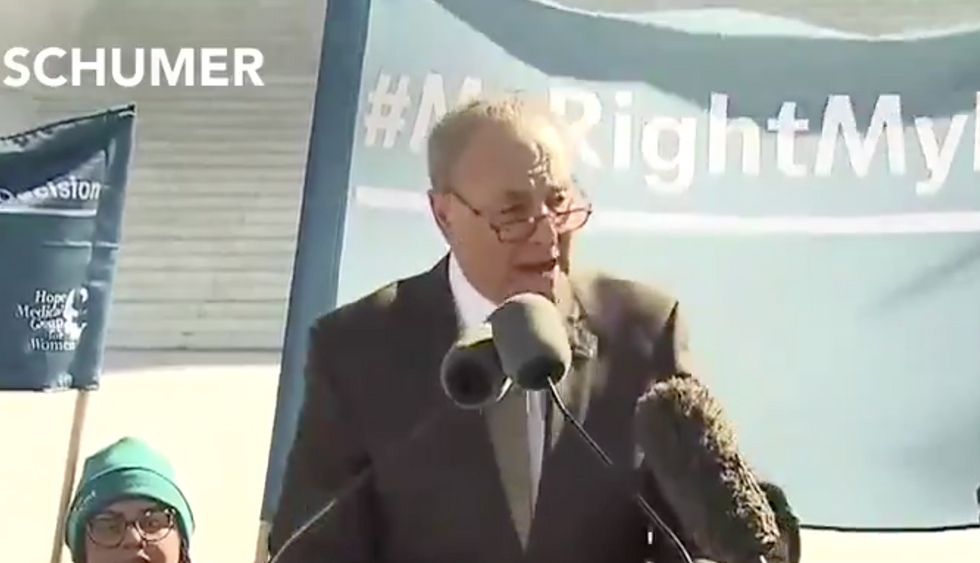 Schumer held a rally outside the Supreme Court on the day it held oral arguments in a case that could prove pivotal in the fight of abortion rights in the United States. At one point, he called out the two justices who were appointed by President Donald Trump and issued a threat.

In response, Roberts denounced the minority leader's attacks in an evening statement:

This morning, Senator Schumer spoke at a rally in front of the Supreme Court while a case was being argued inside. Senator Schurner referred to two Members of the Court by name and said he wanted to tell them that “You have released the whirlwind, and you will pay the price. You will not know what hit you if you go forward with these awful decisions.” Justices know that criticism comes with the territory, but threatening statements of this sort from the highest levels of government arc not only inappropriate, they are dangerous. All Members of the Court will continue to do their job, without fear or favor, from whatever quarter.

Such direct responses to a politician's comments from the chief justice are exceedingly rare. Roberts, in particular, is deeply committed to keeping the court above the political fray as much as possible. One exception to this pattern was his rebuke in 2018 of Trump's remarks about "Obama judges."

As he was then, Roberts was absolutely correct to now to call out Schumer. Justices are not meant to be held accountable for their rulings to the public in the way legislators and presidents are for their policies; they are only subject to impeachment as a check on their power. So there's no plausible excuse for Schumer's threat, and Roberts was right to call it "dangerous." If, as many fear, the conservatives on the Supreme Court do impose their views on the country beyond what is thought to be acceptable, there could be legitimate avenues for checking the justices' power. These include passing constitutional amendments or even, potentially, changing the size of the court or passing a rule mandating a retirement age. But while these reforms might be warranted, they should not be considered making Kavanaugh and Gorsuch "pay a price."