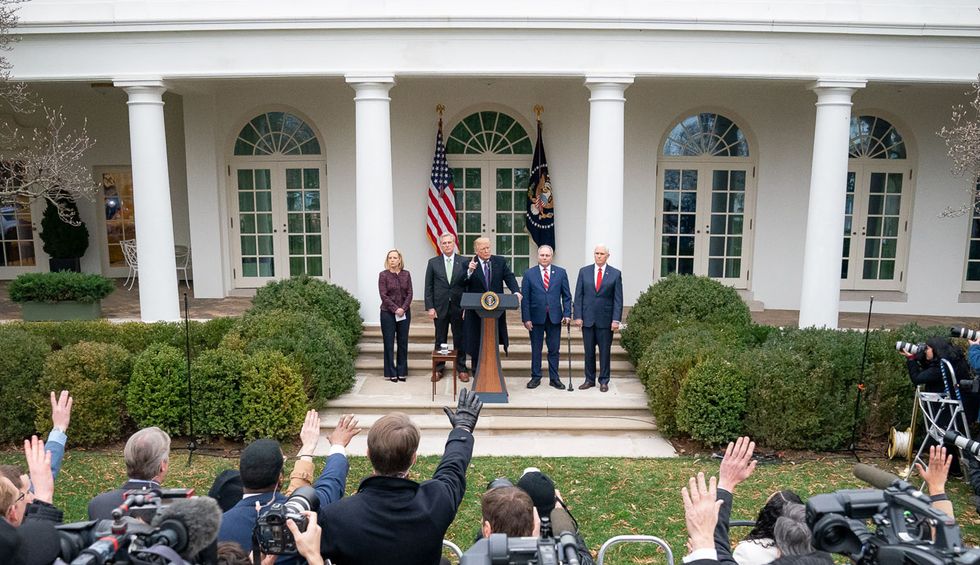 In professional wrestling circles, the "Legion of Doom" is a name that conjures up the fearsome physiques and painted faces of one of the great tag teams of all time. In the political arena today, the same moniker aptly describes an even more daunting and dangerous duo: the profits-over-people corporate wing of the Democratic Party and the belligerent, bigoted, and brutal GOP of Donald Trump. There’s really no better way to describe a pairing that literally imperils our democracy and our planet at the same time.

The foundation for this forbidding alliance—"bipartisanship" at its worst—is simple. Both of these powerhouses are beholden to the same benefactors: an assortment of status-quo-defending behemoths that includes Wall Street, the oil and gas industry, health insurance companies, Big Pharma, military contractors, and mainstream media conglomerates. They therefore share the same no-holds-barred commitment: making sure that progressive victories are few and far between.

Of course, unlike their predecessors on the mat, today's Legion of Doom don't rely on brute strength and frightening visages to subdue opponents. Rather, their seeming stranglehold on our politics comes from the bottomless wealth of the self-serving 1% and from the use of manipulative narratives—"political mind games"—designed to mislead us about what's happening, what's right, and what's possible.

As a psychologist, I've studied these propaganda appeals. The ones that tend to be most effective in confusing and misdirecting us target five core concerns that govern how we make sense of the world—namely, issues of vulnerability, injustice, distrust, superiority, and helplessness. Each is linked to a basic question, like this.

First, are we safe? The Legion of Doom are ready with the answers that best serve their corporate backers. Sometimes that means fearmongering about how progressive policies will threaten our wellbeing. Encouraging panic over Medicare for All fits the bill—even though tens of millions of Americans lack the health insurance they need. At other times, they instead offer unfounded assurances to allay our legitimate fears. Thus, they falsely insist—contrary to scientific data—that the destructive consequences of climate change are overblown and no cause for alarm.

Second, are we being treated fairly? Here the Legion of Doom are quick to prey on our uncertainties about right and wrong. One frequent ploy revolves around disingenuous claims that they're fighting for justice. Corporate school reformers become ultra-wealthy entrepreneurs by promising to help underprivileged children, and massive defense contractors fill their coffers by posing as defenders of human rights. Another ploy involves misleading arguments in which shameful injustices—unconscionably extreme inequality, astronomical CEO salaries—are portrayed as the just outcomes of so-called free markets.

Third, who should we trust? Our doubts in this arena are soft targets for the Legion of Doom's manipulative appeals. So they tell us that particular groups—perhaps communities of color, or immigrants, or those who are poor—are "different" and that their grievances are best viewed with suspicion. And they warn us that progressives and other critics of the status quo are purportedly dishonest, misguided, or misinformed—despite overwhelming evidence that the current system rewards the few by depriving the many.

Fourth, are we good enough? Often the Legion of Doom aim to win our loyalty with deceitful declarations that everyone benefits from the greed-driven pursuits they present as high-minded endeavors. They defend health insurance giants with false notions of protecting "choice," and they promote anti-labor "right to work" laws with cunning tributes to "freedom." At the same time, they depict dissenters as unappreciative and "un-American"—even though alternative policies like Medicare for All and a Green New Deal are broadly popular and would improve countless lives.

And fifth, can we control what happens to us? Here the Legion of Doom turn our concerns about helplessness to their advantage. Sometimes they duplicitously insist that transformative changes—a living wage for all, an end to homelessness, healthcare as a human right—are pipe dreams impossible to achieve due to unconquerable forces. At other times, they instead warn us that a progressive agenda will jeopardize our autonomy, as though returning power to the people would be a step away from—rather than toward—greater democracy.

All of these manipulative mind games (and more) are central to the Legion of Doom's 2020 electoral strategy. Establishment Democrats have already unleashed them in an effort to undermine progressive primary candidates at every level—most notably against Senator Bernie Sanders of Vermont. If he and others nonetheless emerge victorious, the GOP is patiently waiting its turn before November's general election. They're ready with a second barrage of these propaganda ploys, all aimed at wrestling our hopes for meaningful change into submission.

But another round of potentially catastrophic Legion of Doom victories doesn't have to be our destiny. This status-quo-defending, donkey-and-elephant tag team—committed to continued self-aggrandizement rather than solidarity with those who have less—can be defeated. First, by resisting and debunking their misleading appeals, and by helping others to do the same. Second, by offering an honest and compelling alternative narrative, one with the straightforward message that insecurity, mistreatment, and crushed aspirations shouldn't be a routine part of so many lives. And third, by building a coalition of Americans that's large enough, diverse enough, and fearless enough to show the Legion of Doom that their domination of our politics is over. As Bernie Sanders said at a recent debate, quoting Nelson Mandela, "It always seems impossible until it's done."

Roy Eidelson is the former executive director of the University of Pennsylvania’s Solomon Asch Center for Study of Ethnopolitical Conflict, and a past president of Psychologists for Social Responsibility. His latest book is, Political Mind Games: How the 1% Manipulate Our Understanding of What’s Happening, What’s Right, and What’s Possible.