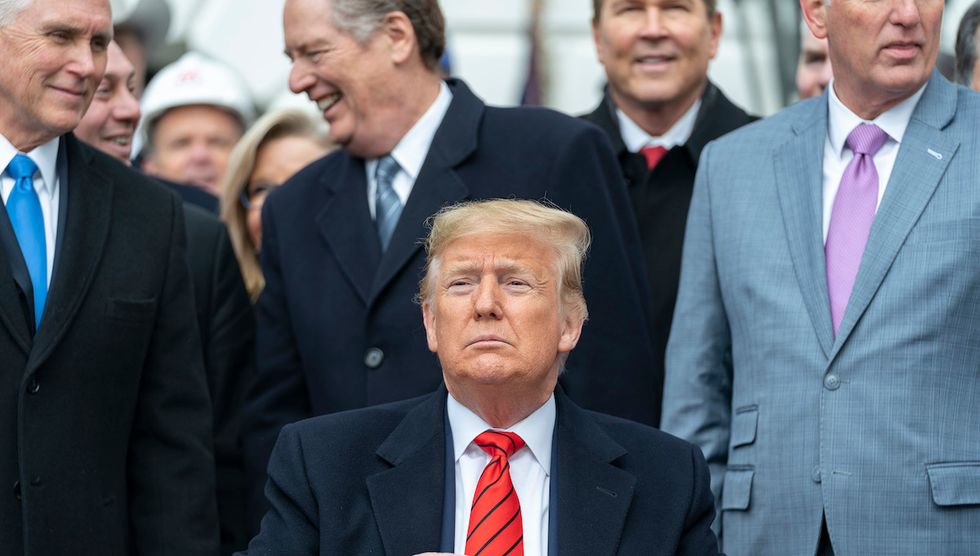 In a move that drew outrage from labor unions and progressives, President Donald Trump this week quietly took steps to slash a scheduled pay raise for millions of federal workers from 2.5% to 1% due to supposed concerns about "keeping the nation on a fiscally sustainable course."

"I have determined that for 2021 the across-the-board base pay increase will be limited to 1.0%," Trump said in a message to Congress on Monday. "This alternative pay plan decision will not materially affect our ability to attract and retain a well‑qualified federal workforce."

The president's proposed "adjustment" to the scheduled pay raise will take effect in January 2021 unless Congress passes legislation to override the change.

Just a day after his message to Congress, Trump tweeted, "BEST USA ECONOMY IN HISTORY!"

Critics highlighted the disconnect between the president's justification for cutting the planned raise for federal workers and his boasts about the state of the U.S. economy.

"Trump claimed we had the 'BEST USA ECONOMY IN HISTORY' and cited 'serious economic conditions affecting the general welfare' to justify limiting pay increases for federal workers," tweeted Rep. Steve Cohen (D-Tenn.). "These are contradicting claims. They can't both be true."

This is just the latest action in @realDonaldTrump’s war on civil servants. He held their pay hostage during the fa… https://t.co/9CAU2W4NvS
— Steve Cohen (@Steve Cohen)1581475082.0

Slate's Elliot Hannon wrote Wednesday that "cutting the 2.5% raise set for 2021 to 1% for millions of federal workers seems a bit austere in the face of such self-proclaimed boom times."

"Even more absurdly, Trump is justifying ordering the cut on the grounds that the country is in the midst of a 'national emergency or serious economic conditions affecting the general welfare,' which the White House says authorizes the president to 'implement alternative plans for pay adjustments,'" Hannon added. "So which is it? The best economy in the history of economies or a national economic emergency? Either way, somebody's lying."

Pat Garofalo, managing editor at Talk Poverty, tweeted that warnings about fiscal sustainability are not credible coming from the president who signed into law $1.5 trillion in tax cuts for the rich in 2017.

The administration approved trillions of dollars in tax cuts for the wealthy and corporations, but sure, shortchang… https://t.co/1UafnSyz9A
— Pat_Garofalo (@Pat_Garofalo)1581510426.0

Trump's move came on the same day he proposed his budget for fiscal year 2021, which proposes cutting federal workers' retirement benefits as well as Medicare, Medicaid, and Social Security.

"For an administration that has added $3 trillion to the federal debt, gouging federal employee pay and benefits in the name of deficit reduction is ridiculous," Reardon said in a statement. "NTEU will fight these regressive proposals on retirement while supporting existing legislation calling for a 3.5% pay increase in 2021."