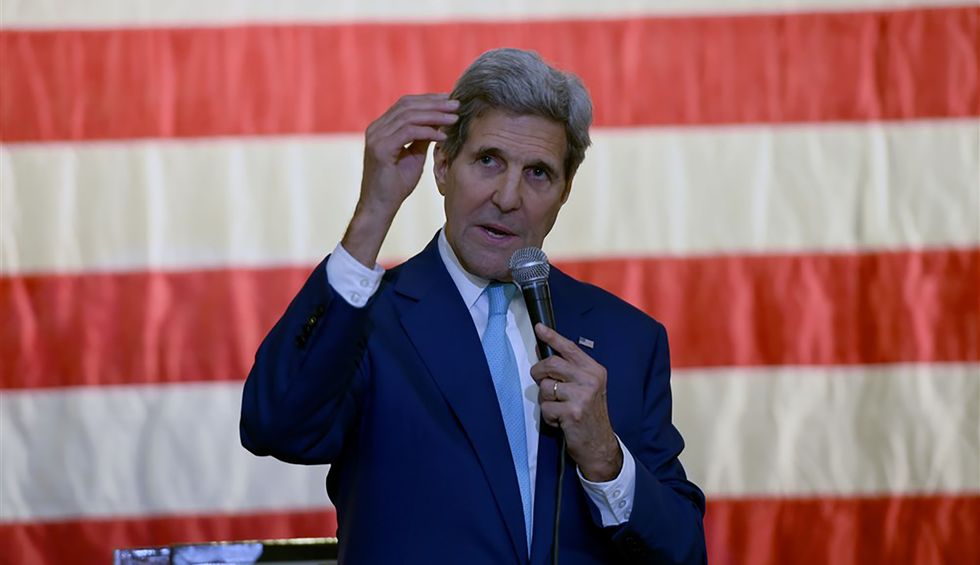 Former Secretary of State John Kerry is considering throwing his hat in the ring for the 2020 Democratic presidential nomination if Sen. Bernie Sanders cannot be stopped.

That's according to NBC News, which reported Sunday that one of the their analysts overheard a phone conversation between Kerry and an unknown second person in the lobby restaurant of the Renaissance Savery hotel in Des Moines, Iowa.

"Maybe I'm fucking deluding myself here," Kerry said as he tried to figure out the logistics of such a move.

The fact that the former secretary of state would have that conversation in earshot of reporters was surprising to NBC News reporter Alex Seitz-Wald.

"If you're John Kerry in a Des Moines hotel the day before the Iowa Caucus, assume people will overhear you loudly spitballing about entering the presidential race!" tweeted Seitz-Wald.

If you're John Kerry in a Des Moines hotel the day before the Iowa Caucus, assume people will overhear you loudly s… https://t.co/Wh29clP7oZ
— Alex Seitz-Wald (@Alex Seitz-Wald) 1580678161.0

Kerry said in the conversation that he feared "the possibility of Bernie Sanders taking down the Democratic Party—down whole" and that billionaire donors would have to "raise a couple of million" for such a bid.

Sanders leads in polling in Iowa, New Hampshire, and nationwide and is close to the lead or within the margin of error in other important primary states South Carolina, Nevada, California, and Texas.

As NBC News reported, Kerry would have to disentangle himself from a number of commitments in his private life such as a lucrative speaking career and his position on the board of Bank of America.

Kerry is in Iowa campaigning for former Vice President Joe Biden, who has seen his once-sizable lead over the rest of the Democratic primary field shrink. Biden is now polling in second in Iowa in the Real Clear Politics average of polls, and lower in some individual surveys.

If Kerry was serious, his entry would mark the latest in a series of moves by the party establishment seen by Sanders supporters as trying to game the system to deny Sanders the nomination.

The former secretary of state denied considering a run on Twitter Sunday.

As I told the reporter, I am absolutely not running for President. Any report otherwise is categorically false. I’v… https://t.co/BCIkCTBTpy
— John Kerry (@John Kerry) 1580680466.0

Progressives were unimpressed by the report.