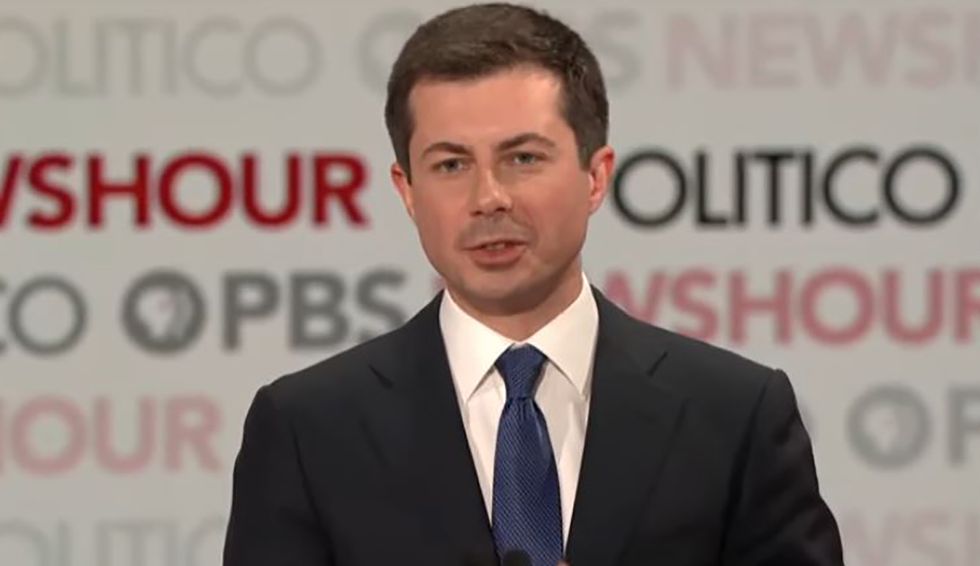 This weekend, Pete Buttigieg told supporters that he became a viable candidate for president “on the strength of our vision” and “the urgency of our convictions.” Such rhetoric fits snugly into a creation myth about his campaign that Buttigieg has been promoting since early 2019.

Summing up the gist of that myth, Buttigieg began this year by standing at a whiteboard and looking into a camera while he talked about the genesis of his run for the presidency. “We launched as an exploratory committee, not even a full year ago, with a few volunteers, zero dollars in the bank,” he said—and “without the personal wealth of a millionaire or a billionaire.”

And Buttigieg offered reassurance to those concerned about big money in politics, saying: “What we built in 2019 we were able to put together without any contributions from federal lobbyists, or from fossil-fuel executives, and not one dollar from corporate PACs.” But, as Aldous Huxley wrote in the introduction to his classic novel of dystopian technocracy, Brave New World, “the greatest triumphs of propaganda” are accomplished by maintaining “silence about truth.”

Buttigieg has remained silent about what made the ascent of his campaign possible—the early, major and continuing support from extremely rich people enmeshed with powerful and destructive corporate interests—enabling the Pete for America campaign to get off the ground and gain altitude. Buttigieg’s rise was propelled by the rocket fuel of funding from—and bonding with—wealthy corporate operators, who bundled big checks from other donors and provided an establishment seal of approval that resonated with mainstream media.

The deft spin from the Buttigieg apparatus and the huge media hype about him have obscured the significance of his deep-pocketed backers. Key information about those ties has rarely gotten into the mass-media echo chamber. Yet, occasional reports have offered a window into the big-money support for Buttigieg that he is eager to leave unmentioned.

Buttigieg may have started his presidential campaign a year ago “with a few volunteers” and “zero dollars in the bank” -- but it wasn’t long before plenty of millionaires and billionaires flocked to back him with their own money and piles of checks from wealthy associates.

“Pete Buttigieg Is the Only Top 2020 Democrat Taking Money from Lobbyists,” HuffPost reported in April. “Buttigieg’s campaign said the donations wouldn’t influence his policy positions and noted he isn’t taking donations from corporate PACs or fossil fuel interests.” Later, the Center for Public Integrity explained in mid-summer, Buttigieg “reversed his stance and refunded more than $30,000 from federal lobbyists. . . . But Buttigieg has nonetheless continued to rely on wealthy and well-connected ‘bundlers’ to help him fundraise -- and to great effect, raising more money of late than most other 2020 presidential candidates.”

As summer began, Buttigieg’s star was ascending on Wall Street. There, the New York Times reported, “donors are swooning over Mr. Buttigieg enough to open their wallets and bundling networks for him.”

By October, under the headline “Pete Buttigieg Takes Lead as Big Business Candidate in 2020 Field,” Fortune magazine was reporting that “when it comes to opening hearts (and wallets) of business leaders across America, Buttigieg is shining.”

It was the middle of October when Buttigieg defended his reliance on big donors with a memorable comment: “We’re not going to beat Trump with pocket change.” However, as Common Dreams pointed out, “Critics noted that (Bernie) Sanders and (Elizabeth) Warren are the top fundraisers of the Democratic primary, raising $46 million and $35 million mainly through small donations.”

In early November, the Washington Post reported that “Wall Street donors have a new favorite candidate in the 2020 Democratic presidential field: Pete Buttigieg. . . . Buttigieg leads his rivals in collecting contributions from the securities and investment industry, pulling in $935,000 through the first three quarters of this year, according to figures from the Center for Responsive Politics.”

By then, Buttigieg was neck-and-neck with frontrunner Joe Biden for largesse from billionaires. In December, Forbes documented that “40 billionaires and their spouses have donated to Pete Buttigieg’s presidential campaign, according to an analysis of federal election filings, making the South Bend, Indiana mayor a favorite among America’s richest people.”

The outlines of Buttigieg’s high-roller fundraising strategy came into sharper focus in mid-December when his campaign released the names of about 150 wealth-connected supporters who had each “raised at least $25,000 for our campaign.” At the same time, Newsweek reported, “disappointed Twitter followers are requesting their money back from Buttigieg under the #RefundPete hashtag. Some say they are disappointed by his taking large donations, some say they're disappointed by his consultation work, some say they felt ‘fooled’ by his behavior and donated earlier in his campaign.”

The effectiveness of the Buttigieg campaign’s creation myth will soon be gauged by vote totals. Running for president in an era of oligarchy, Pete Buttigieg has chosen to be an antithesis of Bernie Sanders (who I actively support), resembling countless politicians so eager to take big money from the wealthy that it’s unclear if they have any priority higher than trying to win the next election.