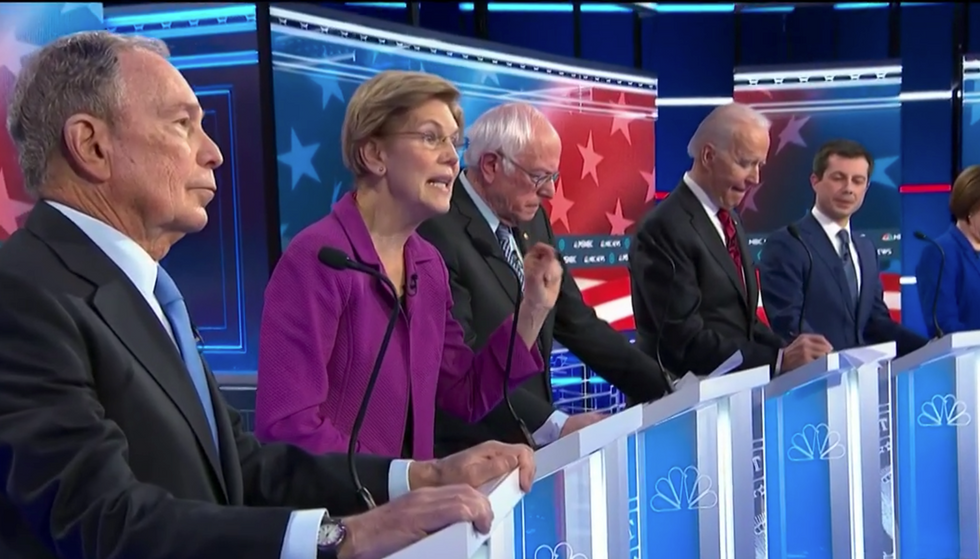 His presence on the stage drew fire from the other candidates, but it also seemed to change the overall tone of the debate, with more attacks, counter-attacks, and passion than was generally seen earlier in the campaign.

Here's a (necessarily subjective!) list of the winners and losers from the fray:

Sen. Elizabeth Warren (D-MA) — Warren hit her stride right as the debate started by attacking Bloomberg for his record on the mistreatment of women, racist policies, and his tax returns. She repeatedly came back to skewer the former mayor, making herself the biggest and most notable presence in the debate. But importantly, she also continuously brought the discussion back to the issues she cares about — like expanding health care, environmental justice,  and consumer protection — while getting in digs at the other candidates on the stage.

Pete Buttigieg — The former South Bend mayor faces an unlikely road to the nomination as he hasn't yet shown the ability to win over communities of color. But there's a reason a previously unknown figure is standing on stage next to a former vice president and three senators, and it's that he can perform well when he needs to. Buttigieg ably positioned himself between Bloomberg and Sanders, casting himself as an alternative to their supposedly polarized sides of the Democratic Party. He also found himself in multiple spats with Sen. Klobuchar, which likely helped neither of them, but he got the better of the Minnesota lawmaker in most of their exchanges.

Sen. Bernie Sanders (I-VT) — Sanders didn't break any new ground in the debate; instead, he mostly hit his usual notes. With Bloomberg on the stage, many anticipated that the fireworks would fly between the mayor and the Vermont senator — but Warren's passion overshadowed Sanders' sharp criticisms. To his detriment, Sanders at one point fell into a trap about debating the behavior of his supporters online. But as the current frontrunner in the primary, Sanders didn't do anything likely to cause him to lose his lead, and he delivered the consistent performance that his supporters tune in for. By not losing, Sanders remains a winner.

Joe Biden — Biden gave an energetic performance throughout the night, and compared to Bloomberg on the stage, he seemed more lively than ever. But as his political star is fading in the primary, he showed no sign that he has a plan to regain momentum.  An overall forgettable showing.

Sen. Amy Klobuchar (D-MN) — While Klobuchar likes to remind viewers of debates that there's more that unites the Democratic Party than divides it, her most memorable moments on the stage came when she was attacking Buttigieg. After he listed a series of her votes that he argued showed a poor track record on immigration, she said: "I wish everyone was as perfect as you, Pete." She hit him for memorizing "talking points" and attacking her time in the "arena." Unfortunately for her, one of her back-and-forths centered on a genuinely embarrassing moment for her in a recent interview, in which she was unable to name the current president of Mexico. And in each of the fights, she was on the defensive, which is not a recipe for invigorating a long-shot campaign.

Michael Bloomberg — For someone casually tuning in to the debate without much background, it may have seemed that Bloomberg was put on stage solely as a punching bag for everyone else. Each candidate took their turn to pummel the billionaire, who they all surely resent for recently buying his way into a nomination battle they've been fighting for at least a year now. He took on substantial criticism, and he didn't handle it well. Perhaps his worst moment came when Warren pressed him on whether he would release the women who have signed non-disclosure settlements against him or his company, and he smugly said no. But some of his wounds were self-inflicted, such as when he quipped that he is so wealthy that he can't simply do his taxes on TurboTax.

Bloomberg seemed unprepared for the heat of the debate, lacked basic elements of charisma, and made no plausible case that he belonged on the stage. His only decent moments came when he discussed climate change, an issue he genuinely does seem to care about and understand. But his strength on this issue is not enough to overcome his many faults, and he was by far the biggest loser of the debate. Everyone in politics will be watching to see if such a dismal showing can dent the impressive polling bump that his hundreds of millions in ad spending have bought him.